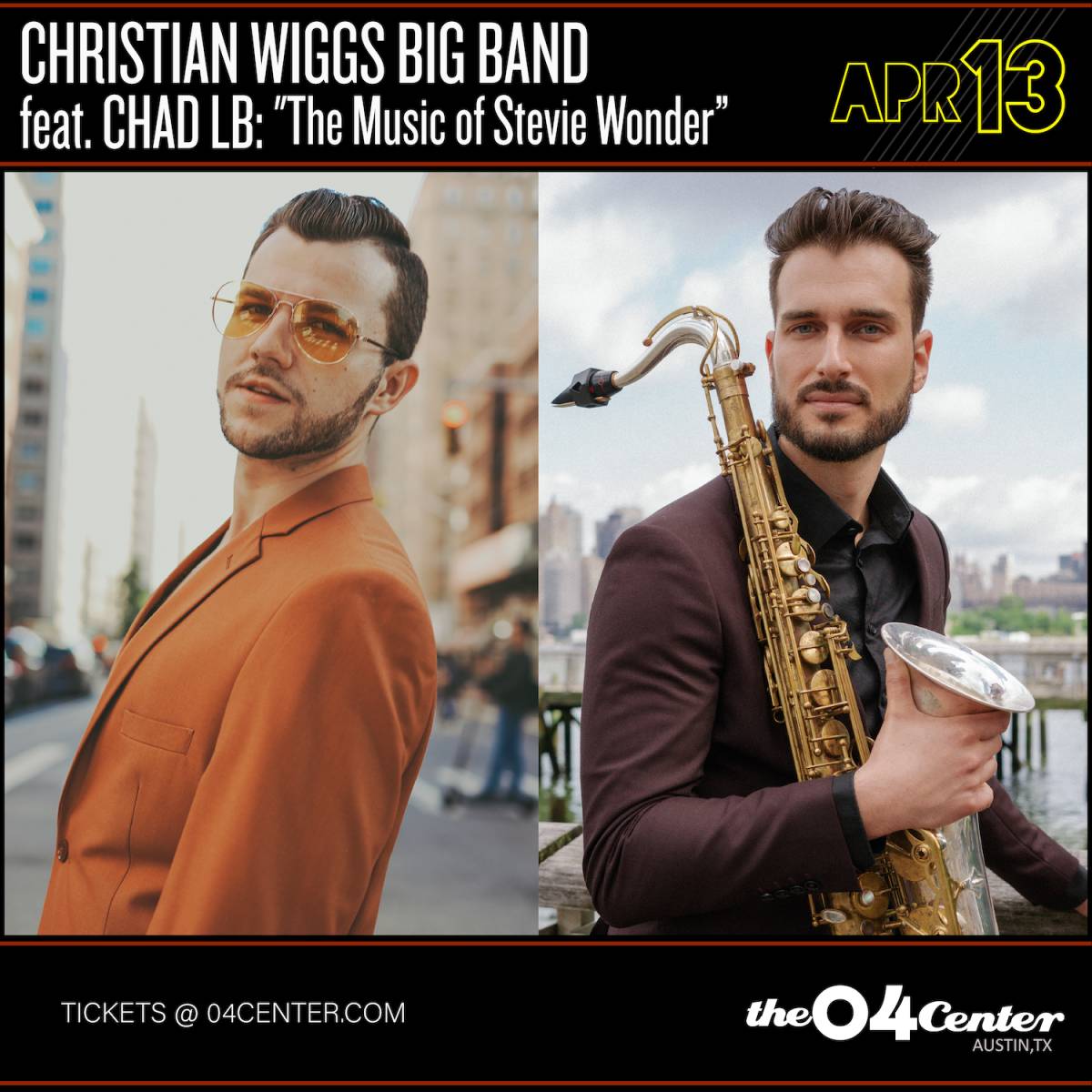 Suited to the modern era, the Christian Wiggs Big Band is an 18-piece jazz ensemble that features original compositions and celebrated hits from an array of musical genres and artists. Within its first year, Wiggs led the ensemble to an official showcase at the annual SXSW Music Festival in Austin, Texas.

For one night only, the band will join together with internationally renowned saxophonist, Chad Lefkowitz-Brown, to bring the timeless hits of Stevie Wonder to the stage in all new, electrifying arrangements.

Taking inspiration from luminaries such as Kurt Elling, Christian Wiggs is a vocalist, bandleader, lyricist, producer, director, artist manager, educator, and founder of Bandstand Presents.
Christian has shared the stage with acclaimed musicians such as Benny Benack III, Martina DaSilva, Bryan Carter, Steven Feifke and Aubrey Logan. In addition to collaboration, Christian serves as artist management for drummer/vocalist, composer, and orchestrator Bryan Carter.
Wiggs has released three studio albums and serves as the host and producer of “Off The Bandstand”, a series of conversations that feature local and national jazz musicians. Off stage, Christian serves as an active producer and director, his work behind the camera being featured by Playbill, ABC News, NPR Live Sessions, and WRTI 90.1.
--
Hailed as a “Sax Phenom” by the New York Daily News, Chad Lefkowitz Brown has toured globally as a bandleader, and with superstars ranging from Chris Botti to Taylor Swift. He has been a featured soloist with premiere ensembles like the Juilliard Jazz Orchestra, and he was formerly a prominent member of the multi GRAMMY winning Afro Latin Jazz Orchestra.
At only 31-years-old, Chad has now become one of the first jazz headliners of his generation, amassing a loyal social media fanbase of over 250,000 followers across platforms. Despite his demanding tour schedule, Chad continues to be a visiting artist at the renowned San Francisco Conservatory of Music, where he gives monthly masterclasses during the scholastic year.
Since graduating from the Brubeck Institute, Chad has performed throughout six continents, and has appeared at venues including Carnegie Hall, the Super Bowl, and Madison Square Garden. His debut album, Imagery Manifesto, was named “Debut Album of the Year” by jazz critic and author, Doug Ramsey, and two of his most recent recordings as a leader, “Onward,” and "Live at The Bridge" feature jazz legend, Randy Brecker, with whom he has toured and headlined jazz festivals throughout the United States and Europe.
Event by
The 04 Center
Calendar
Website
Facebook
Twitter
Instagram