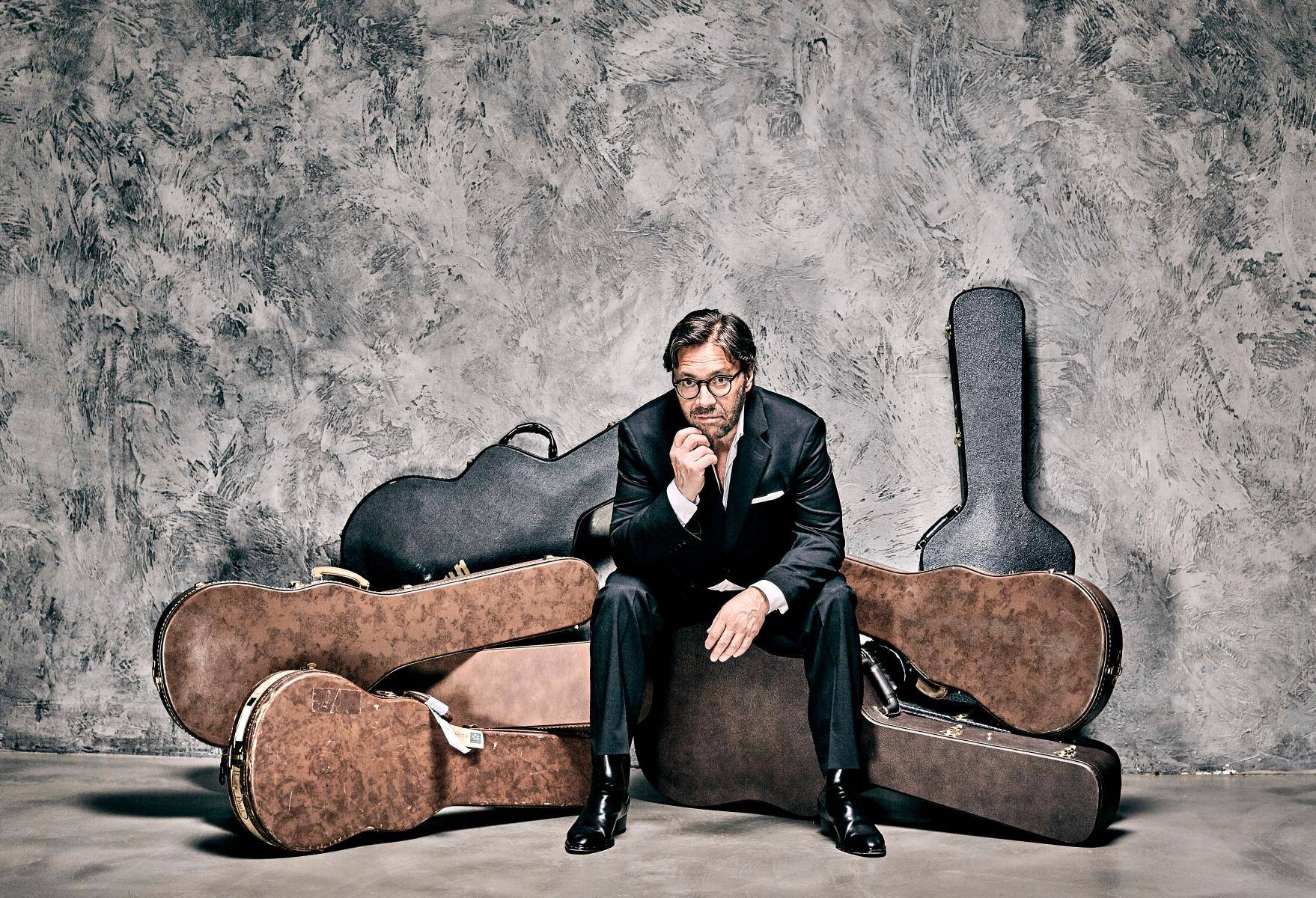 An evening with Al Di Meola

Al Di Meola, a bonafide living Guitar Legend inducted into the Gallery of Greats is among the top guitarists of our time. His ongoing fascination with complex rhythmic syncopation combined with provocative lyrical melodies and sophisticated harmony has been at the heart of his music throughout a celebrated career that has spanned four decades and earned him critical accolades, four gold albums, two platinum albums, more than six million in record sales worldwide, five German gold albums, and various awards including an Honorary Doctorate Degree from Berklee College of Music, the Honorary Miles Davis Award presented by the Montreal Jazz Festival, a BBC Lifetime Achievement Award presented by Sir George Martin in 2008, Hungarian Foundation for Performing Arts Lyra Award, and numerous Grammy nominations and awards. Al is the recipient of the most prestigious guitar awards ever given, a total of 12 awards from Guitar Player Magazine polls and as a result, was inducted into their Gallery of Greats.

Not only a guitar hero, but a prolific composer, he has amassed over 30 albums as a leader while collaborating on a dozen or so others with the likes of the fusion supergroup Return to Forever g(with Chick Corea, Stanley Clarke and Lenny White), the celebrated acoustic Guitar Trio featuring fellow virtuosos John McLaughlin and Paco de Lucia, and the Rite of Strings trio with bassist Clarke and violinist Jean-Luc Ponty. And while his dazzling technique on both acoustic and electric guitars has afforded him regal status among the hordes of fretboard fanatics who regularly flock to his concerts, the depth of Di Meola's writing along with the soulfulness and the inherent lyricism of his guitaristic expression have won him legions of fans worldwide beyond the guitar aficionado set.

A pioneer of blending world music and jazz, going back to early Latin-tinged fusion outings like 1976's Land of the Midnight Sun, 1977's Elegant Gypsy and 1978's Casino, the guitar great continues to explore the rich influence of flamenco, tango, Middle Eastern, Brazilian and African music with his World Sinfonia, an ambitious pan-global group that he formed in 1991. Their exhilarating world music fusion has been documented on such releases as 2000’s The Grande Passion (featuring the Toronto Symphony Orchestra), 2007’s Live in London, 2011’s Pursuit of Radical Rhapsody and the stunning 2012 DVD, Morocco Fantasia (recorded at the Mawazine Festival in Rabat, Morocco and featuring special guests Said Chraibi on oud, Abdellah Meri on violin and Tari Ben Ali on percussion).

Growing up in Bergenfield, NJ with the music of The Ventures and The Beatles, Di Meola naturally gravitated to guitar as a youngster and by his early teens was already an accomplished player. Attaining such impressive skills at such a young age didn't come easy for Al, but rather was the result of focused dedication and intensive periods of woodshedding between his junior and senior years in high school. “I used to practice the guitar all night after school and once in college, 6 - 8 hours per day” he told Down Beat. “And I was trying to find myself, or find the kind of music that suited where I was going with the guitar.”

His earliest role models in jazz included guitarists Tal Farlow and Kenny Burrell. But when he discovered Larry Coryell, whom Al would later dub “The Godfather of Fusion,” he was taken with the guitarist's unprecedented blending of jazz, blues and rock into one seamless vocabulary on the instrument. “I used to ride the bus from New Jersey to see him at little clubs in Greenwich Village,” he recalls. “Wherever he was playing, I'd be there.” In 1972, Al enrolled at the Berklee College of Music in Boston and by the second semester there began playing in a fusion quartet led by keyboardist Barry Miles. When a gig tape of that band was later passed on to Chick Corea by a friend of Al's in 1974, the 19-year-old guitarist was tapped to join Corea’s fusion supergroup Return to Forever. After three landmark recordings with Return to Forever -- 1974's Where Have I Known You Before, 1975's Grammy Award winning No Mystery and 1976's Romantic Warrior -- the group disbanded and Al subsequently started up his career as a solo artist. His 1976 debut as a leader, Land of the Midnight Sun, was a blazing showcase of his signature chops and Latintinged compositions that featured a stellar cast including drummers Steve Gadd and Lenny White, bassist Anthony Jackson and Jaco Pastorius, keyboardists Jan Hammer, Barry Miles and Chick Corea and percussionist Mingo Lewis. Over the course of six more albums with Columbia Records – Elegant Gypsy, Casino, Splendido Hotel, Electric Rendezvous, Tour De Force and Scenario – Al established himself as an influential force in contemporary music. 1980 marked the triumph of the acoustic guitar trio with Paco De Lucia and John McLaughlin. Their debut recording on Columbia Records, Friday Night in San Francisco, became a landmark recording that surpassed the four million mark in sales. The three virtuosos in the trio toured together from 1980 through 1983, releasing the studio album Passion, Grace & Fire in 1982. In 1995, they reunited for a third recording, Guitar Trio, followed by another triumphant world tour.

Di Meola’s 2013 release “All Your Life” recorded at Abbey Road Studios was an acoustic tour de force that had him revisiting the music of a seminal influence – The Beatles. “I really credit the Beatles for the reason why I play guitar,” he says. “That was a major catalyst for me to want to learn music, so their impact was pretty strong.” A virtual one-man show of virtuosity, it features the guitar great interpreting 14familiar Beatles tunes in the stripped-down setting of strictly acoustic guitar.

In 2015 he released Elysium, which finds the guitar great blending the lush tones of his nylon string Conde Hermanos acoustic prototype model and a ’71 Les Paul electric (his Return to Forever and Elegant Gypsy axe) in a collection of songs that are at once invigorating and alluring. “It represents a new composition phase for me, whereby the writing became, in a sense, my therapy during a challenging personal transition in my life," he said. In the same year he was honored as the 22nd recipient of the Montreal Jazz Festival’s Miles Davis Award, created in 1994 to honor a great international jazz musician for the entire body of his or her work and for that musician’s influence in regenerating the jazz idiom.

2018 marked a new era for Al Di Meola: His first of six signed projects with German record label Ear Music, “OPUS” was released in March. The Grammy award winning virtuoso says: “With Opus I wanted to further my compositional skills as I think that the evolution of this part of my persona has labelled me more composer/guitarist than guitarist/composer. For the first time in my life, I have written music being happy, I’m in a wonderful relationship with my wife, I have a baby girl and a beautiful family that inspires me every day. I believe it shows in the music.”

A retrospective of Al Di Meola’s nearly 50 year acclaimed career is expressed through his latest Ear Music release of March 2020 “ACROSS THE UNIVERSE” with his virtuosic arrangements and creative interpretations of 14 Beatles songs with a larger scale full production featuring orchestrations balanced with lavish acoustic arrangements and electric guitar.

Current work includes an autobiography and a new solo guitar record of 13 brand new compositions. Al is also very proud to announce the upcoming April 2022 release of “Saturday Night in San Francisco” from the 1980 tour of the Guitar Trio with John McLaughlin and the late Paco de Lucia.