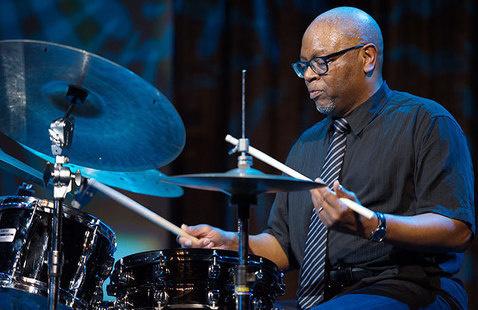 All Festival and Band Packages available via the link in the description below.
Date
Saturday
October 24, 2020
Time
Doors 10:30am
Location
This is a virtual live streamed event

Pacific Jazz Festival is an annual 2-day event, October 23-24, for jazz students, musicans and jazz music fans. The Conservatory of Music invites all interested for master classes and livestreamed performances with the conservatory faculty and our renowned guest-artists.

Participants will be able to ask questions during a moderated Q & A.

Lewis Nash is an American jazz drummer who, according to Modern Drummer magazine, has one of the longest discographies in jazz and has played on over 400 records, earning him the honor of Jazz's Most Valuable Player by the magazine in its May 2009 issue.

Nash is noted for his adaptability to a vast array of genres, as evidenced by his performances with such different musicians as Tommy Flanagan and Don Pullen. Nash has made 5 recordings as bandleader: Rhythm is My Business (1989), It Don't Mean a Thing (2003 Japanese import) and Stompin' at the Savoy (2005 Japanese import), Lewis Nash and the Bebop All-Stars featuring Frank Wess (2008 Japanese Import), and The Highest Mountain (2012). In 2008, Nash became part of The Blue Note 7, a septet formed that year in honor of the 70th anniversary of Blue Note Records.