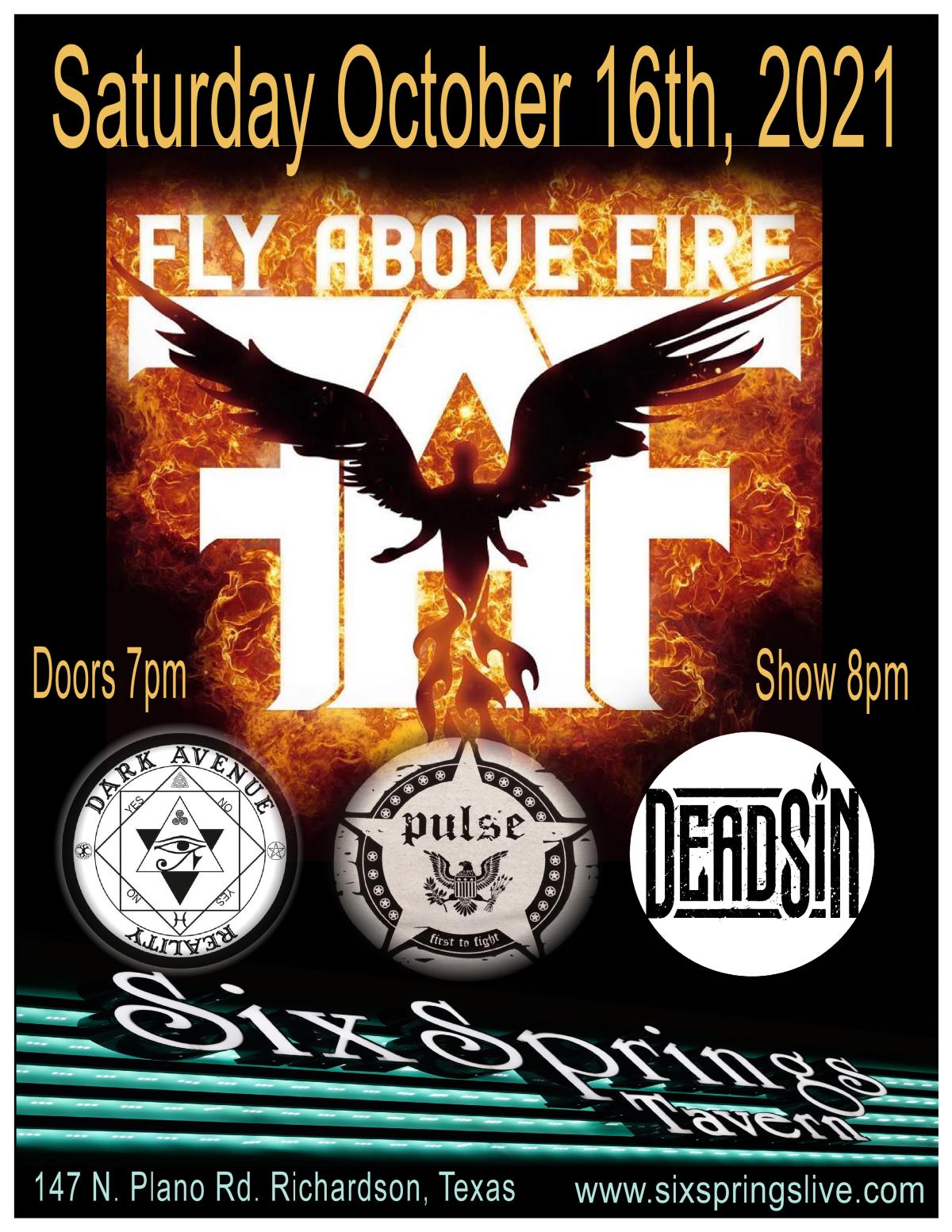 Fly Above Fire with Dark Avenue, Pulse and Dead Sin

FLY ABOVE FIRE is a hard rock ensemble hailing from Dallas/Fort Worth, Texas. The band was born from the ashes of multiple well-known and established area bands. Founding members Kenny Poovey, Nathan Hines, and Jeff Barnett wanted to set out on a mission to shed light on a dark world, to bring together all walks of life to be united through the power of music, to bring a spark to where only ash once was.

From this vision, FLY ABOVE FIRE was born. Intimate music led by crushing guitar crunches beautifully blend with melodic vocal hooks to drive this powerhouse through a dynamic and thought-provoking reality that questions good and evil, the what-ifs and what-nots, the sinner and the saint, the same world we all live in. Where the only way to fight back is to FLY ABOVE FIRE.

Don't be held back or pulled down… Let the REVOLUTION begin!

Dark Avenue is a modern, hard rock/alternative metal band hailing from the super vibrant Dallas/Ft. Worth, Texas music scene. Powerful melodic vocals, tight pounding rhythms, solid thick guitar work, and ethereal electronics make a mystical combination and it’s no surprise Dark Avenue has risen as a top tier emerging artist. Launching in 2014, Dark Avenue made quick work of getting noticed. Landing an artist development deal within their first year together lead to the critically acclaimed release of their first full length album Illusions, all the while bringing high energy shows to every stage they play.

Attracting the attention of many touring national acts wasn’t hard for Dark Avenue; as their reputation grew, they racked up support slots, one after another. Queensryche, Pop Evil, Red Sun Rising, Drowning Pool, Stryper, and Powerman 5000 are just a few of the many bands Dark Avenue has supported. As the magic and energy behind Dark Avenue continued to build, they headlined the AXIS Entertainment Stage during Rocklahoma 2018, and were named a Top 4 performance in the company of A-List artists Godsmack, A Perfect Circle and Machine Gun Kelly. * Creating engaging music that overtakes your very soul, is what Dark Avenue is about; they themselves are music fans, and they know how music can make you feel.

Their sound is not easily put into one box or genre… Hard Rock, Alternative, Metal, Post Grunge are all “labels” that could fit Dark Avenue, but then, they don’t fit at all once you have experienced their music. Dark Avenue prides itself in playing what they feel at the moment it’s being created, which has led to its very organic feel and sound. With all 5 members as contributing writers, every song takes on a life of its own, as Barry, Jeff, Alan, Andrew and Mario all have diverse musical influences – The Beatles, Metallica, Judas Priest, Pantera, Johnny Cash, Soundgarden, The Hollies, Guns-N-Roses, NIN and more, it is never the same when their creations come to sonic life. Their music can only be described as Dark Avenue…. It’s heavy without being heavy, it’s melodic and it’s powerful. This unique chemistry lends itself to fans of all types of rock music; from light to heavy and everything in between, and this truly magical musical blend is easily seen in their widely diverse fan base. Dark Avenue has racked up many accolades in the bands relatively short career. *Antihero Magazine ranked Dark Avenue’s performance at Rocklahoma 2018 in the Top 4 of the entire Rocklahoma festival.

2016 saw Dark Avenue as winners of Krave Radio’s Annual Music Awards as 2016 Artist Of The Year and 2016 Video Of The Year (Maybe Tomorrow). “The sound that Dark Avenue creates is sweet to the ears of any fan of rock/metal looking for something fresh and new” says JoJo Keys, Steemit (Apr 28, 2018) and from Mark Bryson, The Hook (Jun 28, 2016) “Their music is often described as an uncontrollable flame and I'd have to agree.” As they gear up for the release of their third album, Reality, singles “The Light” and “Don’t Hold On” are already making waves in the industry. Both singles were mixed by Toby Wright (Metallica, Alice in Chains, KoRn, Sevendust). *www.antiheromagazine.com/best-of-rocklahoma-2018

PULSE will make you an instant Fan with their catchy hooks, melodic vocals and powerful rhythms.

Since its creation in mid 2011, Pulse has gained quite a lot of momentum. Opening for acts like Trapt, Candlelight Red, Hurt, Smile Empty Soul, The Dreaming, Red Jumpsuit Apparatus and More!!!

DeadSin is a Christ centered rock band from Fort Worth Texas. Formed in 2020, DeadSin strives to use their passions and abilities given by God to spread the Gospel. With honesty and sincerity DeadSin tackles tough subjects such as judgement, prevalent false teaching, and personal testimony in their debut EP titled, “The Protest EP” released November 2020. With this message and platform DeadSin hopes to inspire listeners to engage with the Gospel of Jesus Christ and to seek truth above all things. Soli Deo Gloria!