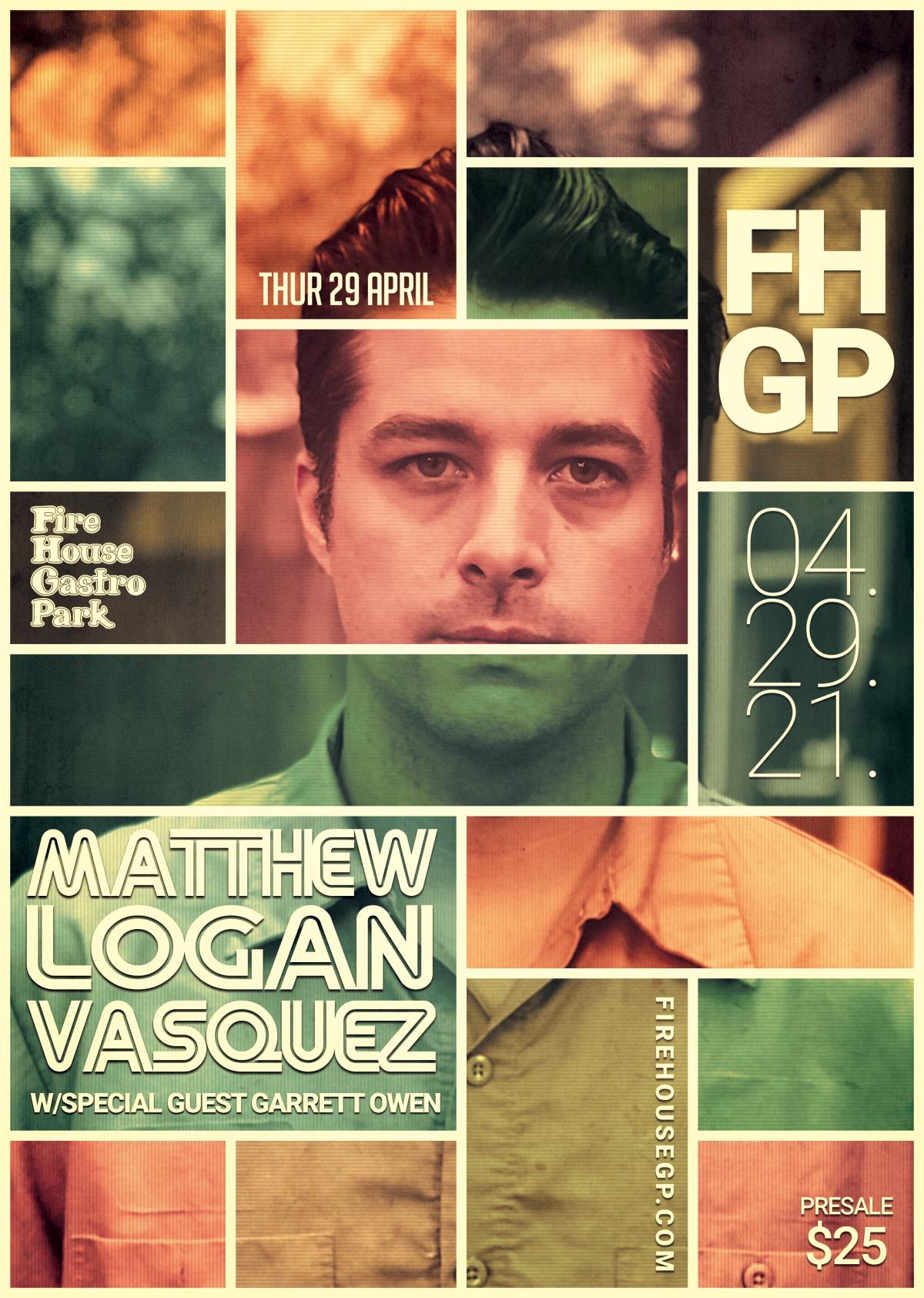 Best-known as the co-founder and frontman for shape-shifting heartland indie rockers Delta Spirit, Matthew Logan Vasquez's fiery delivery and thoughtprovoking lyrics draw from a huge and versatile well of influences, including Gram Parsons, Kurt Cobain, Neil Young, and Iggy Pop. As a solo artist, he juggles elements of indie rock, electronic pop, R&B, and soulful Americana, flirting with despondency, but ultimately succumbing to beatitude, especially on 2017's home-recorded yet vibrant sophomore effort, Does What He Wants. Into the Wide After releasing Delta Spirit's critically acclaimed fourth studio album, Into the Wide, in 2014, Vasquez moved with his wife and newborn son to Austin, Texas and began working on what would become his debut solo outing. The resulting Austin EP, which finds Vasquez manning every instrument and offering up a blistering set of outlaw psych rock, arrived in 2015, with plans to issue his debut long-player, Solicitor Returns, in early 2016. In January 2017, Vasquez issued "Same," the driving single from his sophomore solo outing Does What He Wants, which arrived later that April. The following year another side project appeared, the tequila drenched super group Glorietta, as well as another MLV EP, Texas Murder Ballads. Vasquez fourth LP Light'n Up was released in February 2019 and was followed in 2020 with Delta Spirit’s What is There.

Texas-born Garrett Owen had a musical awakening at age 14 that manifested as an intense desire to learn guitar and an insatiable love for all things heavy metal. Eventually, he began exploring other genres, diligently saving his weekly allowance to afford mail-order CDs to satisfy his typical childhood curiosity. But, Owen’s childhood was anything but typical.

Instead of Little League and sleepovers, Owen’s earliest memories involve frequent trips across the Serengeti and backyard wildlife most of us only experience at our local zoos. The son of church-building missionaries, he grew up in Tanzania and Kenya, riding on the luggage rack of the family’s Nissan Patrol, with vast clear skies above him and gazelles running beside. After leaving Africa, the family completed a stint in Ecuador before Owen’s parents moved the family back to Texas. Life as he knew it became a difficult endeavor; rimmed with the sharp edges of reality in an unfamiliar place, his attempts to settle into a culture he didn’t understand resulted in distress and a suicide attempt - a far cry from the idyllic landscape of his upbringing.

“Getting to the point where songs could even come out of me at all again took some time,” he remembers. However, Owen’s decision to step up to the mic at a songwriters’ night in Fort Worth changed his trajectory and reminded him that pursuing music was his destiny.

Now, the award-winning artist, who calls to mind legends like Paul Simon, Jackson Browne, and Jesse Winchester, is gearing up to release his second full-length album, Quiet Lives, on September 18th. Though he revisits familiar subject matter such as the push-pull of relationships, love, and loss, Quiet Lives is about growth, informed by the perspective gained from life experience.

The diverse 10-track collection delves into more experimental musical territory, as Owen toyed with complex chord changes, melodic dissonance, and intriguing storylines. “My relationship with technology and connection to nature are a new combination in my songwriting,” he says, as evidenced in the album’s lead single, “These Modern Times.” Its blend of folk-tinged finger-picking, synth-infused verses, and anthemic pop choruses illustrate the juxtaposition of old and new as he contemplates the ups and downs of our constant and instant access to digital information. “Hour In The Forest,” which begins as a dreamy folk-pop tune that explodes into searing, Queen-esque guitar rock in its second half, was inspired by two women - one, a potential love interest, the other the bearer of an unforgettable tattoo, while “No One To Save You” ventures into familiar territory as he revisits a past relationship that couldn’t withstand the pressures of life on the road. “I Must Be Evil,” a quirky tune wearing the uniform of a murder ballad, tells the story of vigilante justice. Owen even pays homage to the late great Waylon Jennings as he puts his unique and jazz-folk spin on Jennings’ 1977 tune “The Wurlitzer Prize (I Don’t Want To Get Over You).”

“At its core, all art is based on a ‘true story,’ and by true, I mean the version we carry in our head and heart - the one that can lift or crush your spirit with equal capacity,” the golden-voiced troubadour and who has shared stages with artists like Parker Millsap, Charley Sexton, and Marty Stuart explains. “Some suggest that your upbringing explains quirks of personality like my shyness, a tendency for introspection, and streaks of perfectionism. Maybe. I’m not so fatalistic as to believe our earliest experiences necessarily determine the arc of adult life, but my slightly foreign childhood never leaves my music or me. Everybody’s got a story to tell,” he adds. “I’m no different.”