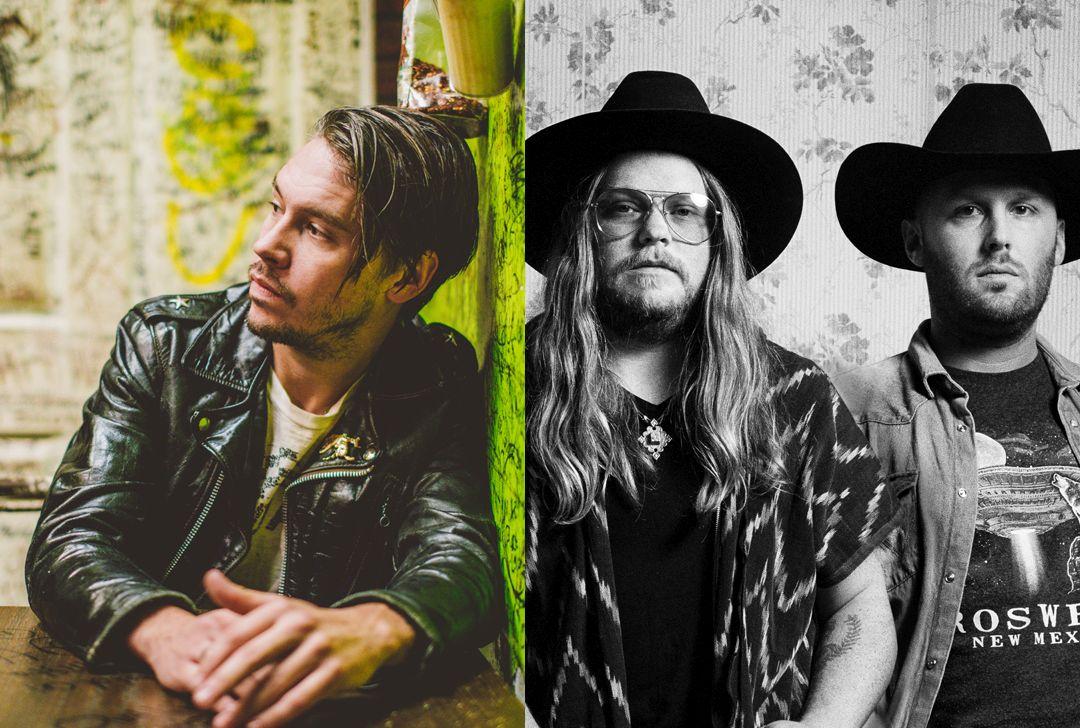 To define Jonathan Tyler’s music would be doing it a disservice. To call it blues would be betraying the uplifting joy of tunes like “Underground Forever” or “California Sunshine.” To call it rock ‘n’ roll wouldn’t do justice to the burning meditation of songs like “Late Night Special” or “Hey Mama, My Time Ain’t Long.” To call it country would be neglecting the sound and fury of “Mister Resistor” or the time-traveling catharsis of “Everything Was Cool in 2002.” Jonathan Tyler’s music defies expectation or sonic categorization – his music is the purest expression of everything you feel but don’t know how to express. It’s as friendly as a neighborhood saloon, as pensive as a highway to Paris, Texas, as peaceful as the waters flowing through the Pecos river to the sea, and as grand and evocative as the endless blue skies of the American west.

If there’s a single label that might be able to wrangle Tyler’s universal soul, it’s Gram Parson’s iconic classification of his own style: “Cosmic American Music.”

A Texan since childhood, Jonathan Tyler has grown up enamored with the spirit of rock ‘n’ roll – and its ancestors. In 2007 he formed Jonathan Tyler & The Northern Lights, who released their debut full-length album Hot Trottin’ to widespread acclaim. At the 2009 Dallas Observer Music Awards, Jonathan Tyler & The Northern Lights walked away with “Best Group,” “Best Blues Act,” and “Best Male Vocalist.” Tyler would go on to win the latter award again the following year. The band was promptly signed to F-Stop/Atlantic Records and released Pardon Me in 2010, leading to television appearances on Jimmy Kimmel Live and The Gordon Keith Show, as well as tours supporting ZZ Top, AC/DC, Lynyrd Skynyrd, The Black Crowes, and appearances at the Bonnaroo Music Festival and Austin City Limits. In 2015, he released his debut solo album Holy Smokes – a genre-bending opus celebrating perseverance in the face of life’s twists and turns.

Along the way, he’s mastered the art of the sounds between the sounds – honing his role behind the boards as a producer for Nikki Lane, Desure, Jeff Crosby and others. At the moment he’s working on a follow-up to Holy Smokes, featuring hit singles like “Old Friend,” “Underground Forever,” and “Hustlin.”

The last time we heard from the Quaker City Night Hawks, they were traveling the country in support of their Lightning Rod Records debut, El Astronauta, an album that mixed the greasy strut of 1970s rock with doses of down-and-dirty Texas blues, science fiction, and Bible Belt boogie. The guys were Texans by birth, but their music whipped up its own geography. With its spacey, southern stomp, El Astronauta could’ve been the soundtrack for a road trip across the American desert…or even the house music for a weekend night at the Mos Eisley Cantina.

Noisey said “this ragtag bunch of boundary-pushers is likely to appeal to fans of Fu Manchu and Tom Waits in equal measure,” and Rolling Stone proclaimed Quaker City Night Hawks songs “fly in the face of mainstream rules.”

“We’ve always been a rock & roll band,” says Sam Anderson, who splits the band’s singing, songwriting, and guitar-playing duties with David Matsler. “There’s a big ’70s influence and a strong southern element to everything we do. With this record, though, we’re exploring the sounds we’ve haven’t touched upon as often. It’s the deepest we’ve ever gone into our influences, and the widest range of sounds we’ve ever tied together.”

QCNH is tied together in more ways than one. Recorded at Niles City Sound (where Leon Bridges tracked his Grammy-nominated debut, Coming Home,several years earlier) in the band’s hometown of Ft. Worth, the album weaves a handful of signature riffs and melodies throughout multiple songs, filling the tracklist with a common strand of musical DNA. The result is a boldly heterogeneous album that still functions as a cohesive whole, produced by White Denim’s Austin Jenkins and performed by a group of road warriors who smartly balance their strengths — Anderson and Matsler’s hook-driven songwriting; drummer Aaron Haynes raw rhythm; the band’s blend of Tex-Mex desert rock and street-smart, big-city bombast — with their desire to explore and experiment.

The exploration begins with the kinetic kickoff track, “Better in the Morning.” Loose and coolly confident, it’s the sort of rock & roll anthem meant to be blasted loudly through open windows on a car stereo. From there, the album follows its unique muse into uncharted territory, from the sexed-up soul-funk of “Suit in the Back” to the heartland rock & roll of “Colorado” to the taut, riff-filled abandon of “Freedom.” Along the way, the Night Hawks nod to Heart’s Dreamboat Annie by pairing their acoustic guitars with analog synthesizers (“Elijah Ramsey”) and deliver their own version of southern rock (“Fox is in the Henhouse”).

The Night Hawks find some time to get weird, too. “Tired of You Leaving” was inspired by African artists like Ali Farka Toure (“It’s a ‘love/love lost’ song that appeared during a week or so of more-or-less freebasing Fela Kuti records,” Matsler explains), while “Grackle King” visits the heady heights of Pink Floyd-inspired psychedelia. When asked about the latter song, Matsler adds, “‘Grackle King’ is about a guy on the verge of a psychological breakdown who has a quasi psychedelic experience while looking into the eye of a crow…which is how I feel most days.”

QCNH casts its net wide, roping gospel harmonies, extended jams, pop hooks, swirling organ solos, and guitar freakouts into the same tracklist. The song’s lyrics follow suit. With “Elijah Ramsey,” Matsler spins the story of a Millennial male who joined the Army in the wake of 9/11, only to deal with repercussions for years. “I had listened to ‘Copperhead Road’ by Steve Earle,” the singer explains, “and it occurred to me that nobody that I’d heard had written a song about some of these men and women’s stories that evoked sounds and imagery that they would have experienced during their time serving in the middle east.” On “Suit in the Back,” the guys recall a real-life run-in with a highway trooper during their Chris Stapleton tour. Perhaps most poignantly, songs like “Tired of You Leaving” and “Freedom” double down on messages of resolve and resilience, with the Quaker City Night Hawks turning their personal struggles into reminders to seize the day.

Built upon a series of live-in-the-studio performances, these tracks shine a light not only on the band’s songwriting chops, but their strength as a road band, too. Many of the tunes were debuted on tour, where their arrangements could be shaped and sharpened according to an audience’s reaction. As the music evolved on the road, so did the Night Hawks’ lineup, which has weathered a handful of lineup changes since the band’s formation. QCNH focuses on the band’s creative core, with Anderson, Matsler and Haynes producing their strongest work to date.

“We’ve got a lot of road under our belts,” Anderson says, rattling off a list of tour mates like Chris Stapleton, J. Roddy Walston, Lucero, and the Sheepdogs. “Songs change so much when you get to play them over and over again for people. They settle into themselves. You see what works and what doesn’t, and you find the balance between the two. Then you bring those lessons into the studio.”

Balance. It’s the key to any band’s survival. After weathering years of ups, downs, and lineup changes, Quaker City Night Hawks reach a rare kind of balance with QCNH. It’s an album that rocks as hard as it rolls. An album that nods to the band’s past while pushing off toward a new future. An album that reintroduces Quaker City Night Hawks as a 21st century band inspired by — but not defined by — the best parts of previous decades.