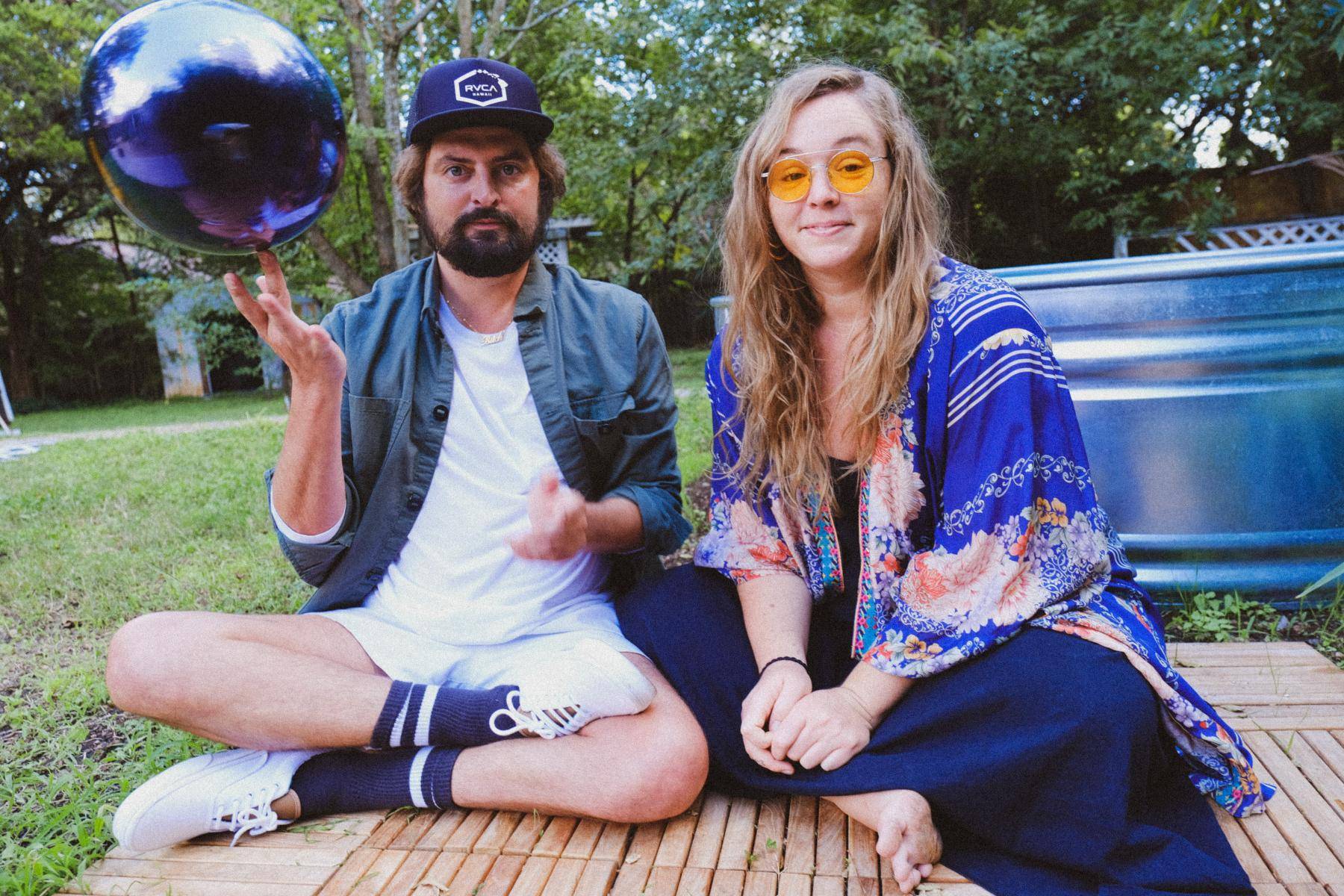 Wild Child won't settle. For seven years now the Austin-based ensemble has carried its infectious blend of indie-pop and infectious melodies across the international music scene, charting viral hits and wrapping their arms around a diverse and dedicated fan base. But earlier this year when the band set out to make their fourth studio album, they found they had their hands full: After half a decade of maturation, the group had grown beyond its traditional writing and recording process.

"We had too many ideas for how we wanted to make this record" says Kelsey Wilson, the group's lead vocalist and violinist. She shrugs. "So we said, 'Why not just do all of them?'"

The group realized this offered an exciting opportunity to make a kind of record bands rarely get right: To take a new, multispectral approach to writing and recording that went beyond simply trying to engineer success. The band made a list of their favorite musicians who were also great producers in their own right - choosing ones they thought would shine a new and unique light on specific compositions - and then Wild Child set about chasing their album from studio to studio all over the world, never saying no to an idea.

The result - the band's fourth album, Expectations - is Wild Child's most creative, colorful and intellectually engaging album to date.

Now a seven-piece pop mini-orchestra (Wilson on violin and vocals; Alexander Beggins on ukulele and vocals; Sadie Wolfe on cello; Matt Bradshaw on keyboards, trumpet, and harmonica; Tom Myers on drums; Cody Ackors on guitar and trombone; and Tyler Osmond on bass), Wild Child formed in 2010 when the group's core duo of Wilson and Beggins wrote and released their first album, Pillow Talk.

Wild Child shaped their last record, Fools, in the shadows of more than one failed love, and Expectations, as the title suggests, is a continuation of that personal experience into an awakening. Wilson and Beggins, whose voices fit each other as naturally as any family act, pushed their boundaries as writers, drawing freely from the stories they've lived as well as the artists around the world that have inspired their growth. Their rate of output over that last year got them thinking differently about producing, focusing on one track at a time. "We've always focused on the record as a whole. We wanted to think about each track as it's own piece - but somehow it all fits together" Wilson says of the approach.

That route took them around the world - from Chris Walla's (Death Cab For Cutie) studio in TromsÃÂ¸, Norway, where the Northern Lights are the brightest in the world, to a home-built warehouse studio on the outskirts of Philadelphia, where Dr. Dog's Scott McMicken picked up the bass and "joined the band for a week," arranging harmonies and sharing living and recording space. Back in Wimberley, Texas, Matthew Logan Vasquez (Delta Spirit) set up a makeshift studio in Kelsey Wilson's beloved childhood home - abandoned since the floods of 2015 - where they found the muses were eager to resurface. The group also tapped the talents of frequent tour mate Chris Boosahda (Shakey Graves), Atlantic Records recording artist Max Frost, and Grammy-winning producer Adrian Quesada (Groupo Fantasma, Brown Sabbath, Spanish Gold).

The result is a theater of possibilities, with arrangements that reflect the range of tastes of the producers, from scruffy lo-fi tape hiss, to smoothed out precision-cut electronic pop sounds. Smartly, the album avoids defining itself and kicks off with a child's voice telling Alexander Beggins, "Don't think that way." The track that follows (called "Alex") is a hook-spangled opener which in its three breezy minutes builds from a single ukulele to a lush and playful arrangement reminiscent of Beirut.

The record almost immediately settles in to find the band at its most expansive. Songs like "My Town" and the deep-breathing "Eggshells" stretch the spaces between beats like a Chinese finger/time trap. They stop for more than one layover in Detroit, with "Back and Forth" evoking the horn charts of Arthur Conley and Jackie Wilson (or even Jens Lekman), and "Think It Over" throws an unexpected nod to Sly and the Family Stone.

The closing track, "Goodbye, Goodnight," is also the first the group recorded, and the one they believe best epitomizes the journey of making this album. At first, Scott McMicken's production caught the band off-guard: He slowed the waltz down to the tempo of a dirge - or a dirge with the levity of a waltz - and built the track up at an almost excruciatingly slow pace that in the end gives you what you want from it, but only gives it to you once. "At first we were all just trying to understand where he was coming from," Wilson says with a laugh. "And it took us a while to get there, but the arrangement works out so well - with what the song is about and how we felt when we wrote it - that it ended up being one of my favorite songs on the record."

And the more you listen to Expectations, the more the many worlds of this project begin to cohere around you. After all, one of the great joys of traveling the world is discovering surprising connections: A skyscraper in Barcelona reminds you of a spire in the Utah desert; the Northern Lights in the Norwegian sky look like an oil slick on the Philadelphia pavement. Expectations, an album which can by turns be bitter, wistful, angry, and flirtatious, is rich with these surprising rhymes across the record.

"We're all growing and changing and learning new tricks," Beggins says. Wilson responds, "Yeah, there's no right or wrong way to do anything." Her own record, though, is proof she's wrong.

“You know that feeling. That maudlin nostalgia: You’re in this space you’ve obviously grown out of, wanting to go back to a time that will never exist again.”

A seasoned traveler on the wide expanse of the US touring circuit and world at large, singer-songwriter John Calvin Abney has spent more of his life in motion than at rest. Between regular gigs playing for artists such as John Moreland, Samantha Crain, and Lee Bains and the Glory Fires, Abney has filled nearly every gap with tours to support his own works, including 2019’s Safe Passage and 2020’s Familiar Ground, which netted kind words and acclaim from Rolling Stone, No Depression, Gold Flake Paint, and American Songwriter.

Abney’s most recent album, Tourist, out summer of 2022 via Oklahoma indie label Black Mesa Records, finds him suspended in an uneasy space between the familiar and the foreign. Tourist blooms into opalescent color as Abney reflects upon his decade on the road, yearning for the places he’s left behind, for his friends, for a hometown, while uncovering difficult truths with a gentleness that makes the songs to go down like water. Tourist, punctuated with markers of time and place—the passage of seasons, the tolls and tickets, the landscape that rolls on around him—exudes beauty tinged with an inconsolable melancholy: You can’t return to the same place twice.

“Nothing really stands still.” Abney says, “You can’t begin to gather everything you miss, because it’s countless.”

Tracked during the early months of the pandemic across California, Oklahoma, and Texas, Tourist is the latest collaboration between Abney and John Moreland. The pair remotely engineered and played all the instruments on the record, an effortless work that may find its place somewhere between Wilco and Elliott Smith. Woven together with Moreland’s patient beat, swirling synthesizers, the occasional drum machine, and the easy delivery of Abney’s vocals, Tourist feels at once relatable and otherworldly, a mirror to Abney’s own reality.

John Calvin Abney will be touring across the US through the rest of 2022. He has played over 150 shows a year for the past 11 years, and has supported acts such as Waxahatchee, Murder by Death, Shovels and Rope, Jason Isbell, St. Paul and the Broken Bones.