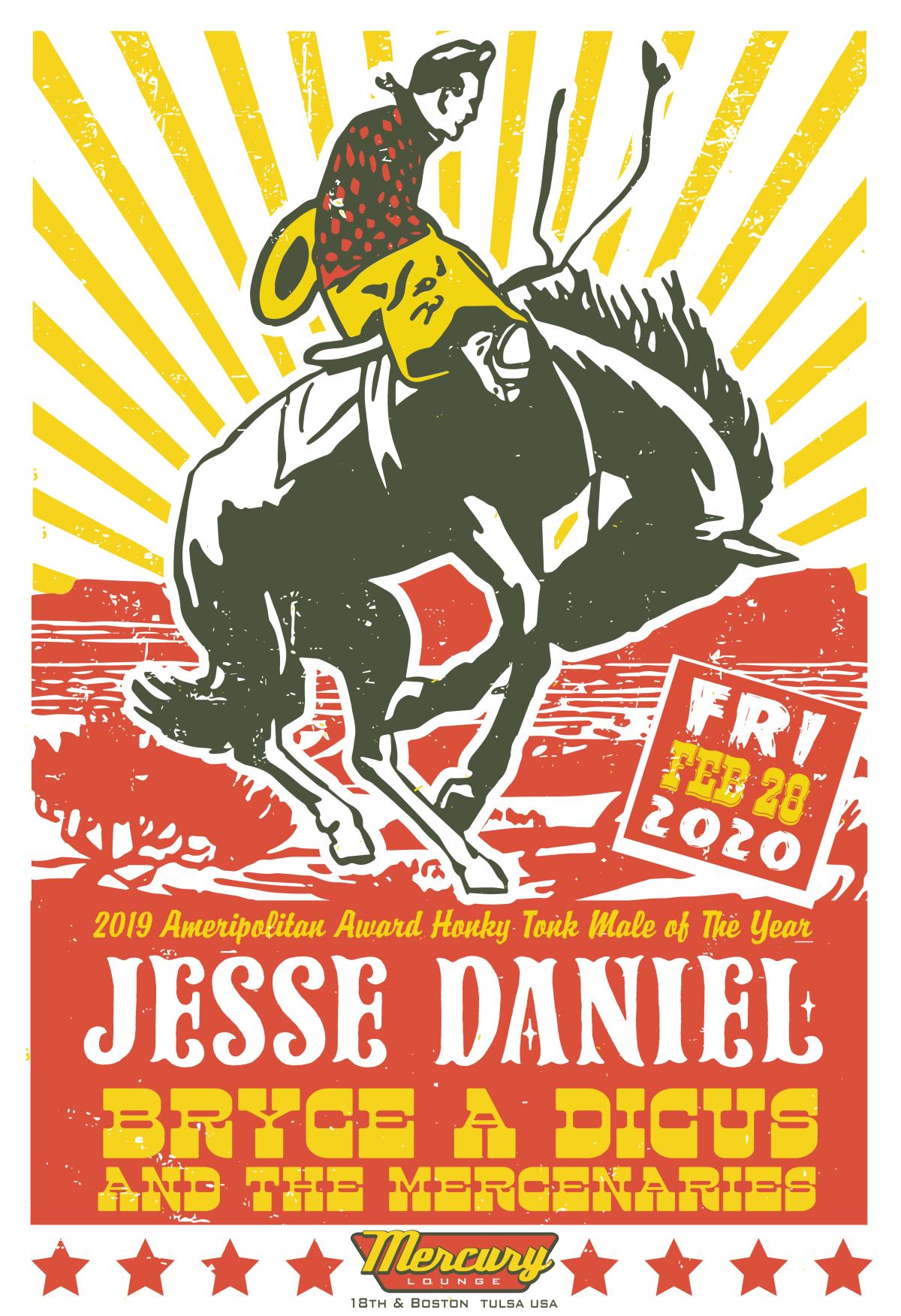 2018 was a good year for singer, songwriter and country music performer Jesse Daniel. Drawing from his own life experience, he released a self-titled debut album that would go on to receive favorable press from many of the top media outlets and critics in music today. Upon its release, he and his band hit the road for much of the year, earning himself a reputation not only as a hard worker, but as a major up and comer in the country music climate as we know it. Honky Tonks, night clubs and large festival lineups all saw Daniel’s signature brand of stage presence, as he turned heads across the United States.

2019 started off with a bang, as the singer took home the trophy for “Honky Tonk Male of The Year” at the Ameripolitan Awards in Memphis, TN. It was shortly after that he announced he would be hitting the studio to record his second full length album that summer. Things seem to be rollin’ on fairly smooth for JD, but his road up until this point has been anything but.

Jesse grew up in Ben Lomond, California. A small town located in an area called the San Lorenzo Valley, tucked away in the mountains east of Santa Cruz. It’s been said that there is “something in the water” of the San Lorenzo River, due to the musical talent that has come out of the surrounding area. Having cut his teeth playing in the local clubs and bars from a young age, as well as touring with regional acts, he found his love for the stage early on. Through this he also found his love for substances and as times got harder, they did too.

Jesse’s teens and early twenties would find him in and out of jail and rehabilitation centers. It was also there that his love for music and desire to perform was reignited. One day while in a facility in Oakland, California, he heard someone playing a Hank Williams tune in the other room. “I had just enough in me to sit in a chair and listen.” Daniel said. “I told him I wanted to play like him and he said, ‘Why don’t you?’”. The singer made a promise to himself that day.

Fast forward to present day, JD seems to have made good on that promise. Having dedicated his life to music, he’s gained fans nationally and internationally, as well as the respect of his peers. Whether on tour as support for major artists, or selling out clubs on his own, he’s only picking up speed on an upward trajectory. With the success of his self-titled debut and a sophomore album coming early 2020, Jesse Daniel is solidifying himself brick by brick as a name you won’t forget in country music.

By the time Dallas Burrow headed to Nashville in 2018 to record his career-defining Southern Wind, the Texas-born songwriter had already wandered across much of the free world, chasing his unique muse from New Braunfels to New Orleans, from Northern California to western Spain, from the Bible Belt to Budapest. He'd been a lifelong explorer — equal parts guitar-playing gypsy and Jack Kerouac-worthy vagabond, taking note of each town's distinctive soundtrack as he bounced from place to place. Those travels shaped his own music: an Americana sound influenced by folk, classic country, and rock & roll, glued together by Texas twang and autobiographical storytelling.

Somewhere along the way, Burrow grew tired of the crazy pace. He'd been on the move for years, dodging law officials on occasion (as detailed in "Rodeo," one of Southern Wind's many highlights) and playing a long string of shows with the help of intoxicants. It was time to sober up, straighten out, and approach his life — as well as his songwriting — with a clear-eyed perspective.

Southern Wind finds him bidding goodbye to those vices and taking one last look at the whirlwind of his young adulthood, a time filled with barely-believable highs — including an inspirational jam session with Bob Dylan, a shared meal of buffalo stew with Dr. John, and a period of time spent traveling with a Native American shaman — and crushing lows. It's a self-reckoning of sorts. "There are songs on the record that recount those wandering, partying days," says Burrow, who recorded the bulk of the album in two inspired days, "and there are songs that tell the story of me becoming grounded and settling down. In a way, it's a chronological story about the various parts of my life. I'm saying goodbye to the young party animal I used to be, and settling into a newfound, more mature version of whoever I am."

And who is Dallas Burrow, exactly? The songs help tell the story. In the acoustic guitar ballad "Strawberry Jam," he's a pre-teen working the fields alongside his salt-of-the-earth grandparents. In "Rodeo," he's a young hellion on the run, running off to New Mexico to avoid some legal trouble back home. "I Come and I Go" and "Guitar Man" — both featuring lyrics written by his father, a musician, poet, and drifting hippie who hung out with legends like Townes Van Zandt and Guy Clark in the 1970s — shine a light on the influence of his Dad, while the titular "Southern Wind" finds Burrow living in Texas and starting a family on his own, having returned to the same state he left as a young thrill-seeker. Southern Wind takes its audience on a full-circle journey, dishing up a compelling soundtrack along the way.

Burrow recorded the album with producer Eric McConnell, known for his award-winning work with Loretta Lynn, Todd Snider, and others. Joining them in the studio were a handful of all-star musicians, including guitar virtuoso Kenny Vaughan, former Johnny Cash bassist Dave Roe, Average White Band drummer Pete Abbott, Edwin McCain collaborator Larry Chaney, harmony singer Sierra Ferrell ("she's like a gypsy Dolly Parton," Burrow says), and guitarist Frank Rische. Chris Scruggs — grandson of bluegrass legend Earl Scruggs, as well as a member of Marty Stuart's Fabulous Superlatives — played lap steel guitar, while world-renowned fiddler Billy Contreras also contributed. Together, the group treated the songs minimally, adding small touches — a swooning fiddle here, a guitar riff there — without cluttering the melodies and messages that serve as Southern Wind's core. They worked quickly, too, recording an average of five songs a day and focusing on live, organic performances. "Dave Roe had a mantra that he'd learned from Johnny Cash, which was, 'We better record these songs before we learn them,'" remembers Burrow, who also tapped Chaney — the producer of Burrow's five records preceding Southern Wind — to record the album's title track before the full tracking session.

On an album filled with Nashville star power, it's Dallas Burrow who shines the brightest. He sings each track in a voice that's been convincingly roughened by the life he's left behind, and he writes about familiar topics — the clean slate of childhood, the angst of adolescence, the rambling rush of a life lived on the run, and the eventual return to a quieter, more rewarding way of life — with a frank simplicity that's both new and nuanced. After nearly losing his way, Dallas Burrow has come home, blown back to his Texas roots by the Southern Wind.