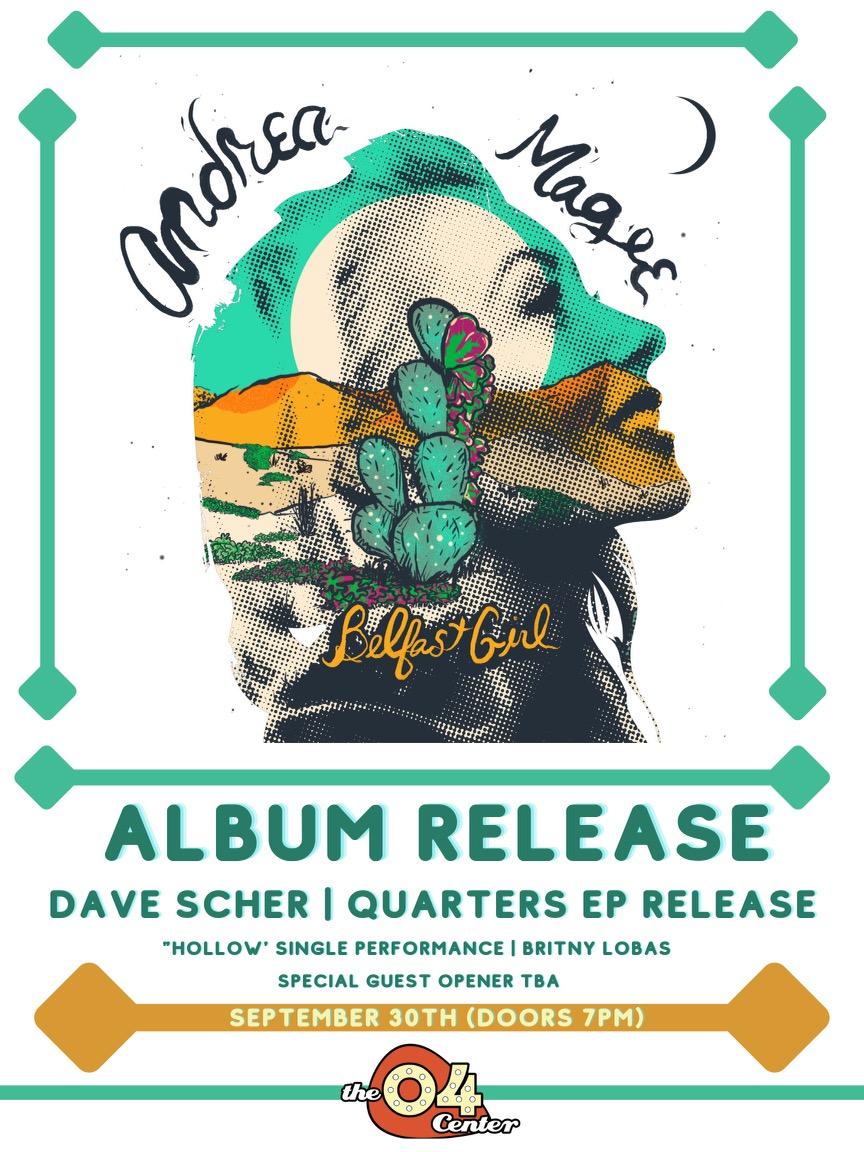 Delivered with her rich soulful voice, Andrea Magee’s Belfast Girl album due out in March 2022, demonstrates her growing confidence and insight, while also honoring her rich heritage. It reveals deeper inner wisdom, resilience and reverence for community and home. “This Northern Irish songbird’s touching tunes take you on an intense journey of compassion and soul. With vibrant, velvety vocals and drums thumping like a beating heart, you cannot help but be drawn to her irresistible bluesy grit. Magee’s mesmerizing album tracks showcase her affection for her craft as she leaves her soulful stamp on each. Her unique storytelling oozes with authenticity and leaves you feeling deeply connected.” – Mitch Mosk, Atwood Magazine Capturing Andrea’s spirit is virtually impossible. A gorgeous contradiction—she is exuberant, passionate, vulnerable, and sensitive—but also tough, tenacious, and compelling. Her exceptionally personal bond with her fans, her home country, and her art, propels her life and career. She effortlessly travels between country, blues, and pop/rock and keeps audiences completely captivated at every show. With the adorable nickname “smiler,” it is no wonder Magee’s infectious music lyrically expresses abundant love and empathy. After six albums with Beat Root Revival, Magee was more than ready to fly solo. Only Love, Her first independent album showcases her emotionally honest and thoughtful songwriting, and garnered rave reviews. “Magee has become omnipresent on the Austin scene, teaming with four other Austin women in the band PAACK and taking a lead role in the trad-Irish outfit Ulla. In 2020, she released Only Love, a solo outing that suggests Magee’s brightest future might be under her own name.” – Peter Blackstock, Austin American Statesman Born in Belfast, Northern Ireland, Magee got an early start, playing in her family band. The traditional Irish folk songs inspired her writing style, anchored by an emotional pulse and tribal rhythm. Moving to the United States in 2016 with British music collaborator Ben Jones, they formed powerhouse musical duo Beat Root Revival. While touring globally with the likes of Jeff Bridges, Brian Wilson, Jonathan Jackson, and Brian Setzer, Andrea’s sound and artistic voice were honed to perfection. Now calling Austin, Texas, home, her solo sound is taking center stage. Holding tight to her integrity and instincts, Andrea focuses on the natural power of song and true musicianship, leaving you with a soulful footprint and an honest connection to her artistry and storytelling. “Magee has moved through hurdles, changes, and profound life experiences: Feeling the pain of heartbreak and seeing relationships transform and grow, throughout it all she never lost sight of her purpose. It is that unwavering resilience to pull yourself back up every time you fall, that shines through in her inspiring music.” – Mitch Mosk, Atwood Magazine “Andrea Magee’s ‘Floating Heart’ is just the kind of music that we need right now, more than ever. Especially in the face of times uncertain, a message of peace in a reminder that everything will be alright in the end is essential. It’s a slow-burning slice of country-blues, accentuated by Magee’s warm, rich vocals as she gorgeously navigates the soulful arrangement.” – Jonathan Frahm, For Folk’s Sake “A potential game-changer: Magee took a guest vocal turn with her beau Dave Scher’s trio at a mid-November party in Austin attended by the Rolling Stones and their associates, and the Stones’ management camp took a shine to Magee.” – Peter Blackstock, Austin American Statesman
--
Dave Scher grabbed onto an electric guitar at age 10, and has spent little of his waking time ever since without having one in his very capable hands. That is, unless, he happens to be playing mandolin, fiddle, bass, piano, organ or any number of other instruments, just to keep things interesting.  He’s been known to dabble in jazz, funk, or even a little country whenever he temporarily wanders from his beloved blues, but basically he does it all.  Dave ScherAnd then there’s his voice—powerful and sensual enough to convey every emotion on the spectrum, a natural extension and perfect complement to his work on the guitar.
It is Dave’s honor and pleasure to play as a sideman for many well-known local acts, and his versatility and enormous talent enable him to really up the ante and make any band sound incredible.  But he mostly shines as a solo performer or when leading his own trio, belting out original material in addition to his own exciting, inventive arrangements of popular and classic covers of all genres.

“One of the best guitar players I’ve ever heard …”
Van Wilkes, “Texas Music Hall of Fame”

“I just wanted to tell you that you sound really great!”
Tony Bennett

“Truly one of the best guitarists I’ve ever heard.”
Carlton Dillard, host of Bridge Radio with Carlton Dillard on Sun Radio, Austin.

But don’t just take their word for it—come on out to a live show soon, and see for yourself!