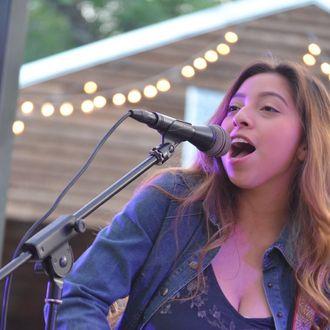 We're taking it outside and sending musical vibes out into the universe! Every Thursday from 5-7 pm on the front porch we'll have a little musical set up rolling. We'll have a few picnic tables but if you have a law chair it wouldn't hurt. The Six Springs Incident Variety Show follows.

At just 19-years-old, State Fair Records artist singer/songwriter Jade Nickol is gaining a name for herself in the Dallas music scene at a swift pace. With her controversial writing and distinctive tone, she has been compared to the voices of Joni Mitchell and Stevie Nicks. From her knowledge of instruments (piano and guitar) to her fascination of the music business, Jade paired with her powerhouse voice is a force to be reckoned with.

Jade Nickol is a Lake Dallas native that is working towards integrating her music into the DFW area. After winning the Lake Cities Idol competition at 10-years-old, Jade realized that her aptitude for singing was way above average. Jade’s mother then enrolled her in vocal lessons along with stage presence classes. Jade flourished and found a community of young musicians that support and encourage each other. After a few months of vocal and stage presence lessons, Jade was invited to join an Artist’s Development Program at her music studio. The program helped Jade learn mic technique, stage direction, and music business basics. When Jade was 13-years-old, she took a big step into furthering her career by teaching herself piano. After a year of self taught, Jade enrolled in lessons with a reputable piano teacher and began learning theory. With an instrument to accompany her, Jade began writing songs and attending open mic’s to receive feedback from fellow musicians. Jade has recently been collaborating with other artists, sitting in with bands, and playing breaks or opening for other musicians.

Now, Jade is a trained singer, songwriter, and musician. She books her own paid gigs and manages all her social medias with some help from supportive parents. In January of 2017, Jade picked up guitar and self-taught herself. Jade is currently a student at Berklee Online studying Music Business. Jade is a determined and self-disciplined artist that understands the time that you have to put in to be amazing. Follow Jade on her journey and see where she goes. You can find her on all social medias including: Instagram-@jadenickolmusic, Twitter- @jadenickol_, Facebook page- Jade Nickol, Reverb Nation- Jade Nickol