THE OLD QUARTER PRESENTS AND EVENING WITH TISH HINOJOSA 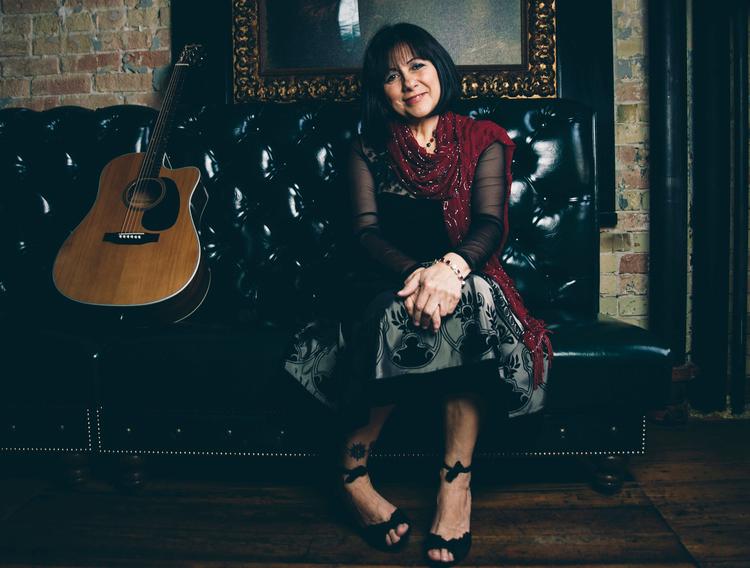 I’m gonna find me a new song to sing,” declares Tish Hinojosa on the title track of her new album, West, the first since 2013’s After the Fair.  Since returning to Austin, TX, from a nearly decade-long sojourn in Germany five years ago, Hinojosa has had to heal, both emotionally and physically from a shattered marriage and a pair of serious surgeries. That rebirth comes through in this classic country-flavored collection, co-produced by longtime collaborators Marvin Dykhuis and Chip Dolan at Fire Station Studios in San Marcos, TX.

“Music flows through cracks and scars,” she sings on a tribute to “My Good Guitar,” which tells the story of how Tish repaired a prized acoustic guitar, handmade by noted luthier John Dillon, which she purchased back in 1992.  “Though we are weathered, we’ve both pulled through,” read the song’s lyrics, artfully comparing artist and instrument.

“She sat broken in my closet for the last seven years,” explains Tish.  “I couldn’t face looking at her.  I decided to buy some wood clamps and gorilla glue at Home Depot, and repair it, just like I’d seen on the DIY Network. We’ve both been through a lot, and now we’re back in action.”

Both guitar and owner sound as good as new and vibrant as ever, given the evidence on West, its title song inspired by an epiphany experienced by Tish during a road trip through Tucson, AZ, where she viewed a dazzling sunset followed by the rumbles of an incoming thunderstorm.

“This album is definitely about renewal,” she says. “Getting back on my feet, regaining my health, and creativity.”

After a fallow period of four years, Hinojosa was suddenly revitalized, writing a number of new songs, playing them for guitarist Dykhuis and piano/accordionist Dolan, then enlisting the rest of her crack band -- fiddler Gene Elders and pedal steel player Marty Muse, who bring that classic country sound, along with bassist Glenn Kawamoto and drummer Rick Richards, to record them.

The result reminds us that Tish Hinojosa was Americana long before the term took hold, recording her debut 1989 album, Homeland, for the A&M imprint by that very name (Americana), which also boasted folk singer/songwriter/guitarist David Wilcox and Cajun poet Zachary Richard.

One of 13 children born to Mexican immigrant parents in San Antonio, Hinojosa has dedicated her career to playing music from the southwest, starting out in Tejano before moving on to singer/songwriter folk, border music and country.

Hinojosa’s new originals are at the heart of the collection, from the romantic tribute to the missions in her hometown (“Church of the Mission Bell”) to channeling Patsy Cline in a bittersweet country shuffle (“Can’t Say It Matters Anymore”) and even a co-write with son Adam Hinojosa-Barker (“I Can Be the Wind”), one of two children from her 20-year marriage to entertainment lawyer Craig Barker.

There are also covers of songs by some of her favorite southwestern musicians. Her version of the late Tim Henderson’s “Maria Consuelo Arroyo” takes on the song’s single immigrant mother raising a family of “dreamers,” and makes it immediately relevant to today’s headlines.  She originally performed Jimmy LaFave’s “Only One Angel,” for a memorial concert at Austin’s Paramount Theatre, turning this recorded take into a remembrance of a dear friend. Tish turns the Mexican standard “Perfidia,” covered by everyone from Desi Arnaz, Nat King Cole and Charlie Parker to Linda Ronstadt, Freddy Fender and Andrea Bocelli, into a country number, thanks to the plaintive pedal steel, fiddle and accordion.  She joins her self-described “mentor” Michael Martin Murphey for his “What Am I Doing Hangin’ Round?” a hit for the Monkees when he offered it to fellow Screen Gems songwriter – and San Antonio/Austin pal -- Michael Nesmith.  Hinojosa originally started out in New Mexico as a back-up singer in Murphey’s band, where he took her under his wing and encouraged the young performer to pursue her singer/songwriter muse.

Tish’s personal style means West has plenty of blood – and raw emotion -- on its tracks, and a number of wounds, too, but Tish Hinojosa prefers to dwell on the positive. On the album’s final track, “Color It Blue,” for which she wrote lyrics over music by co-producers Dykhuis and Dolan, she ends on a typical note of uplift. “Lose yourself to the moon,” she declares, still the wanderlust spirit, ready to move forward to the next stage of an already-impressive career.

“This album happened in such an organic, beautiful way,” she declares.

West is a welcome addition to a resume which features releases on A&M, Warner Bros., Rounder, Watermelon and Lone Star, a command performance for President Bill Clinton and Hillary at the White House with Robert Redford, and numerous prestigious honors, including the NAIRD Indie Folk Album of the Year for 1992’s Culture Swing.  Tish Hinojosa’s trip continues its long and winding road.

On West, Tish Hinojosa has turned that pain to pleasure with music which allows those scars to gradually fade away.