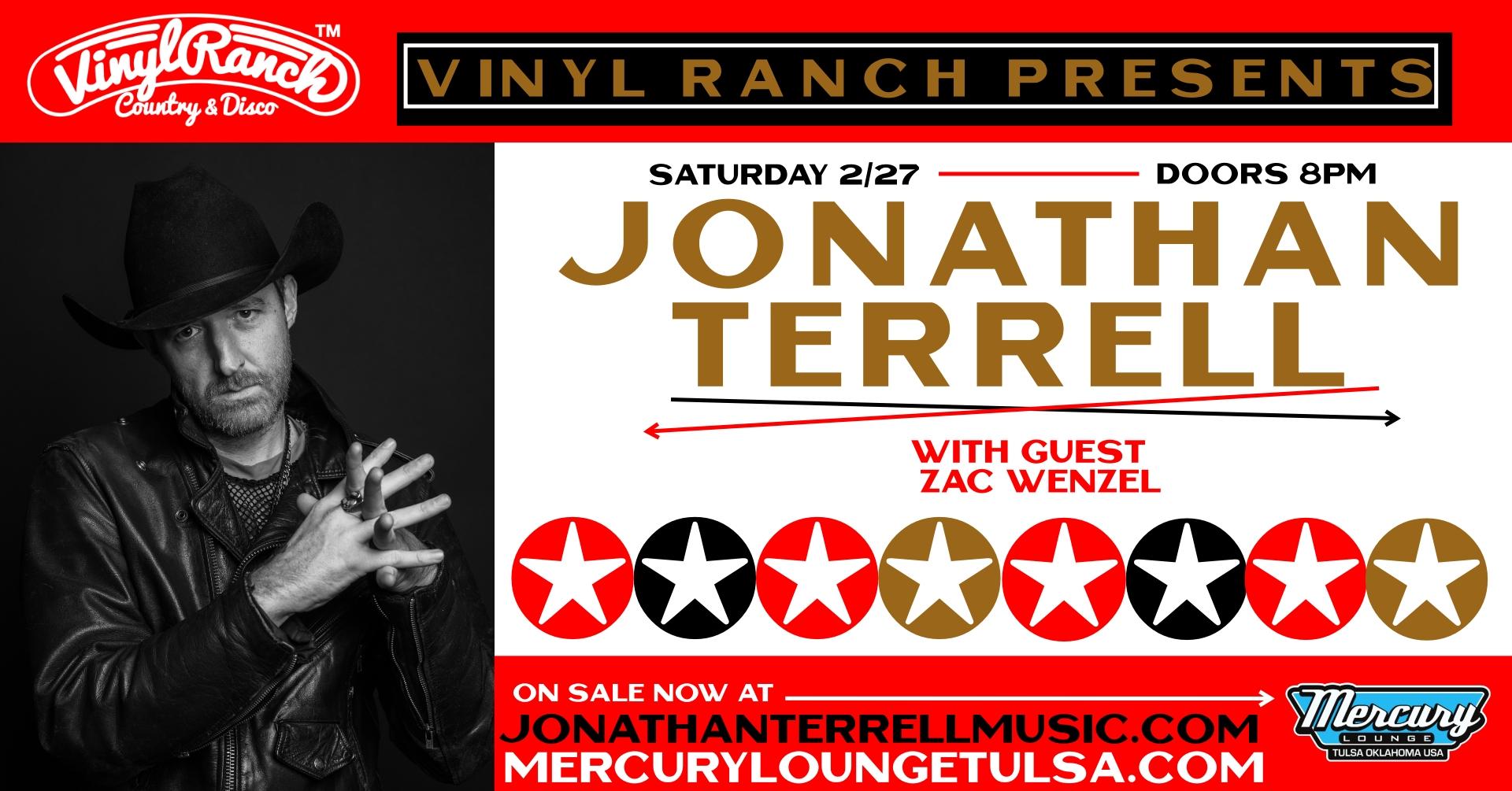 Austin, TX singer-songwriter proves bad boy with a heart of gold with latest LP release, Westward. Born in a singlewide trailer deep in the pines of East Texas to a family of ex-religious cult musicians, Terrell has been engulfed in a life of music since birth. After migrating to Austin  in 2006, he anchored himself firmly in the city's infamous music scene as a beloved country and folk songwriter, trailing close to his heroes Kris Kristofferson and Townes Van Zandt. His sweaty and electric live shows spin honky tonk dance floors and quickly whip heads around to reveal him as a bold lyricist and explosive frontman with “Springsteenian” prowess.

After releasing his first solo LP, Trials & Stimulations, Jonathan quickly set to recording his second, Past the Lights of Town. This album was shelved when he paused his solo career for seven years to go full steam ahead with his rock-n-roll side project, Not In the Face, who caught wind as radio darlings and began a heavy tour schedule.

In 2008, Not in the Face signed with Electric Factory Records and recorded their 1st album, Bikini, with producer Jason Richard. In 2010 they recorded Brass Tacks, a successful EP with legendary producers Bob Ezrin and Garth Richardson (Pink Floyd, Red Hot Chili Peppers, Kiss, Nine Inch Nails). Their second LP, Phase, was produced by Austin’s Frenchie Smith (Jet, … And You Will Know Us by the Trail of Dead) at the Bubble studios and was released on the band’s label in October 2019.

After Past the Lights of Town was accidentally (and thankfully) leaked, and later released on French psych label Wild Valley Records in 2015, it led to several sold out solo tours in France and the UK. Terrell shifted his focus as a musician, now splitting time between his solo band and NITF, while continuing to crisscross the highways of the world.

When discussing the new record, Terrell dishes, “I was completely floored night after night by my European fans' level of attention at the shows. The depth of conversations I was having with them on the streets before the gigs and in the venue alleys afterward gave that European tour a much deeper meaning. There seemed to be a recurring theme in each conversation...the West.”

“One night in Angers France, it all became clear and I saw how feverishly romanced so many of them were with the idea of the American West. It was the reason they were all there. To get a taste of this wild and desolate place that could never be replicated in a thousand years of European art and history. To hear tales of raw life, crushing losses, unwavering perseverance and the freedom in adventure and discovery. I knew I had to create this fantastic landscape inside an album. I’ve been writing and touring for 18 years and this magical place that people across the world, and even in our own country, dream about that just happens to be in my own backyard.”

“I originally wrote 26 songs for this concept and teamed up with producer Stuart Sikes (Loretta Lynn, White Stripes, Modest Mouse) to wrangle this album together and whittle it down to a tight 10 songs. A couple of months before we were scheduled to record the album, my younger brother, Emmanuel Terrell, took his own life. He was a father, Marine vet and a police officer. PTSD is a real thing and it can cripple a mind if not treated properly. My heart was crushed and my head was elsewhere, but we started the recording process thinking it would help ease things.”

“After a couple weeks in the studio I knew I couldn’t work in that headspace. The songs weren’t right. They weren't talking the way I knew they needed to, so the band and I hit the road for six months to go out and fine tune the songs that would make up Westward. I ended up scrapping about half the album and re-recording it in between breaks on the road.”

“I was experimenting a lot with new and vintage sound landscapes. I knew I wanted to make a classic album in the production sense of my the bands I adored growing up, so I was studying every detail in those specific albums. I was absorbing everything. Listening to a lot of Nick Cave, Tom Petty, John Anderson, Joe Cocker, Bob Seger and Dylan. I had started DJing as a side hustle in 2018 and was spinning lots of disco, bossa nova and house music. Anything to keep my brain busy and new sounds coming in. I even did a disco remix of one of my songs with producer Justin Dillon of Gobi.”

The band on the album is a culmination of his incredible road band along with several notable players that lent a hand. Gregg Rolie (Santana, Journey), Shakey Graves, members of Band of Heathens, Black Pumas, and songwriter, David Ramirez. Produced and engineered by Stuart Sikes at Big Orange and Arlyn Studios, mixed by Jacob Sciba (Arlyn Studios) and mastered by Erik Wofford at Cacophony Recorders, this album is the work of a community of friends, musicians, artists, movers and shakers all pulling together to breathe life into an album that they all believe could be a true American classic.

After pausing his heavy touring schedule due to COVID, Terrell refuses to go down without a fight. This cosmic cowboy saddles up for the challenges of self releasing his third and long awaited record in a time of global unrest. In a thick Texas drawl he emphasizes that, “these songs are the stories of all of us. I’m just the vessel. It’s bigger than me”.

Westward’s genre defying sonic landscapes effortlessly mix country, folk, rock n roll and R&B for a totally unique yet timeless sound, while his sharp and barbed lyrics weave tales of love, loss and redemption in a modern world. Giddy up!