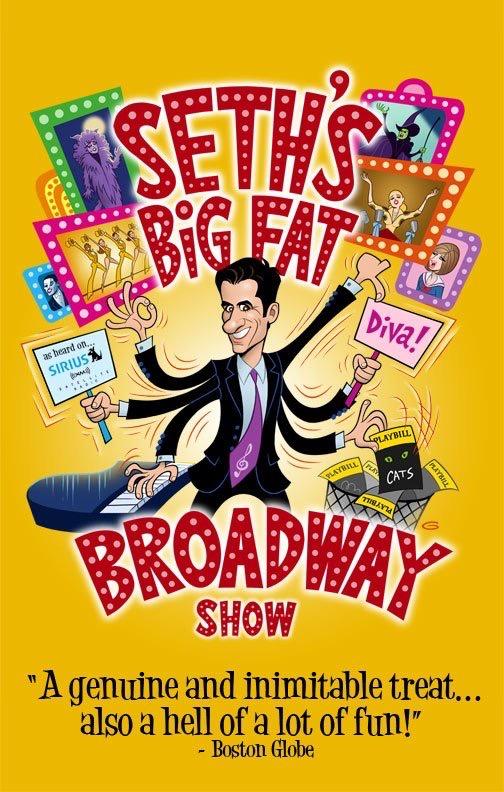 Sirius/XM Radio’s Seth Rudetsky is bringing his hi-larious one man show Seth’s Big Fat Broadway Show to Feinstein's at Hotel Carmichael. It is described as a combination of “America’s Funniest Home Videos”, “The Tony Awards” and “The Daily Show” and has played from coast to coast for the last decade.

Seth is known as “The Voice of Broadway Across America” and “The Mayor Of Broadway” (which is what Audra McDonald calls him). He's worked for over two decades on Broadway as an actor, writer, pianist and conductor, and has been involved with the biggest blockbusters ever, including Les Misérables, Phantom, Ragtime, and The Producers, as well as writing for both the Tony and Grammy Awards.  Seth's Big Fat Broadway Show is a 90 minute hysterical romp featuring Rudetsky’s trademark “deconstructions,” in which he uses his amazing audio/video collection to break down brilliant performances from beloved Broadway divas (Patti LuPone, Betty Buckley) as well as showcasing mind-boggling performances like The Osmonds singing a medley from Fiddler On The Roof. Seriously. He also does an entire section on Barbra Streisand, who actually came to the show in Los Angeles…and Seth will tell that story when you see show!

This award-winning tour-de-force has played all over the USA as well as to a sold-out crowd in London where it received 5-star reviews and was called "Blindingly brilliant" "Fantastic" "Hysterical", a "must-see" and "Nothing short of brilliant"!