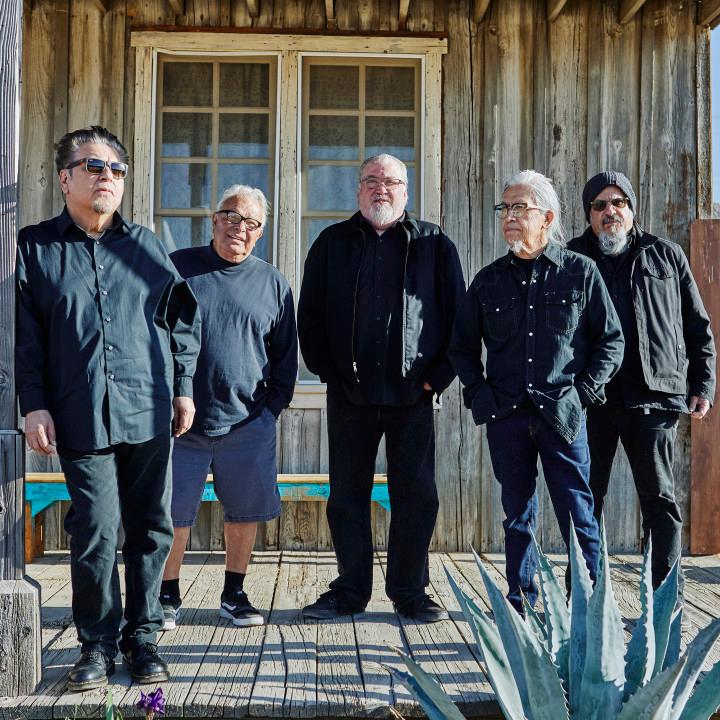 For all the trailblazing musical acts who've emerged from Los Angeles, very few embody the city's wildly eclectic spirit more wholeheartedly than Los Lobos. Over the last five decades, the East L.A.-bred band has made an indelible mark on music history by exploring an enormous diversity of genres -- rock-and-roll and R&B, surf music and soul, mariachi and música norteña, punk rock and country -- and building a boldly unpredictable sound all their own. On their new album Native Sons, the multi-Grammy Award-winners map their musical DNA by covering a kaleidoscopic selection of songs from their homeland, ultimately creating a crucial snapshot of L.A.'s musical heritage.

Produced by the band at Nest Recorders in East L.A., Los Lobos' 17th full-length takes its title from its sole original song: the heavy-hearted and soul-stirring "Native Son," a loving homage to L.A. that sounds right at home amid so many classic tracks. In a nod to their neighborhood, the album opens on the wide-eyed frenzy of "Love Special Delivery" by Thee Midniters, an East L.A. garage band and one of the first Chicano rock groups to ever score a major hit in the U.S. "We grew up on Thee Midniters and felt like they were representing us, so their music means a lot," notes Hidalgo. Another track plucked from the '60s, "Misery" finds Los Lobos tearing through a smoldering breakup song from soul singer/songwriter Barrett Strong. ("He's a Motown artist, but he came to L.A. when Motown came to L.A.," Berlin points out.) From there, the band ventures further into the decade with a medley of two Buffalo Springfield greats, first taking on the lush and sprawling folk-rock of "Bluebird" then breathing new life into the chilling social commentary and iconic guitar harmonics of "For What It's Worth." "That one felt fitting for what's going on in the political climate at the moment," says Berlin of the latter. "It still completely rings true."

Elsewhere on Native Sons, Los Lobos drift into more delicate territory with tracks like "Jamaica Say You Will," a tender reimagining of a Jackson Browne song they first discovered back when Pérez and Hidalgo used to listen to records together after school. (A quintessentially Californian fable, the song brings Browne's nuanced storytelling to a tale of an impossibly lovely girl who works in an organic orchard by the ocean in Malibu.) Later on the album, the band shares their stunning update of the Beach Boys' existential-blues song "Sail On, Sailor," an early-'70s track originally sung by longtime Los Lobos friend Blondie Chaplin. "'Sail On, Sailor' was one that seemed like it would be easy, but once we broke the eggshell it revealed itself to be a lot more complex," says Berlin. "The genius of so many of these records is all the layers that meld together in a way that isn't very obvious at first." And for the climax to Native Sons, Los Lobos deliver their epic cover of "The World is a Ghetto," a majestic piece of psychedelic soul from War. Graced with a gloriously unhinged guitar solo, the track features guest appearances from Little Willie G. (who sang on War's original recording), Jacob G. (Willie's son), R&B legend Barrence Whitfield, and world-class percussionist Camilo Quinones. "We decided you can't do an album about L.A. without War -- but figuring the song out was another challenge," says Hidalgo. "The thing about War is that the songs are intense and relaxed at the same time," adds Berlin. "It's another song that's deceptively simple, and took some time to figure out how to get the feel that War seemed to pull off so effortlessly."

In a particularly meaningful moment for Los Lobos, Native Sons includes a fiery cover of "Flat Top Joint" by the Blasters, the seminal L.A. roots-rock band who helped pave the way for their signing to Slash Records in the early '80s. "There's no place in the world I'd rather have been than L.A. in 1981, '82, '83," says Berlin, who played in the Blasters prior to joining Los Lobos. "Every night there'd be something incredible happening all across the city -- you could go to four different places in one night, and it would all be amazing." Having formed in 1973 (and gotten their start playing spirited renditions of Mexican folk music at parties and in restaurants), Los Lobos quickly found their footing in L.A.'s punk/college-rock scene and began sharing bills with bands like Public Image Ltd. and the Circle Jerks. After making their major-label debut with 1984's critically lauded How Will the Wolf Survive? (co-produced by Berlin and T Bone Burnett), they went on to achieve such triumphs as contributing a smash-hit cover of Ritchie Valens's signature song "La Bamba" to the 1987 biopic of the same name, winning three Grammy Awards, collaborating with the likes of Elvis Costello and Ry Cooder, and earning massive critical acclaim for such albums as Kiko (a 1992 release hailed by AllMusic as "the musical equivalent of a Luis Buñuel dream sequence, balancing beauty and menace with intelligence and a skill that's little short of dazzling").

As with all of their catalogue, Native Sons reveals Los Lobos' ability to merge genres and styles with both sophistication and playful spontaneity, an element that's perfectly reflected in the album's unbridled joy. "I played it for a friend and his first response was that it's a party record -- which sounds right to me," says Hidalgo. Beyond that undeniably feel-good quality, Native Sons essentially serves as a love letter to Los Angeles and the endless possibilities to be found when all boundaries are shattered. "I couldn't say there's a common thread for all these artists, but in a way that's exactly what makes L.A. great," says Berlin. "You've got R&B and punk rock and rock-and-roll and folk, and somehow it exists together in this one weird city that we all call home."