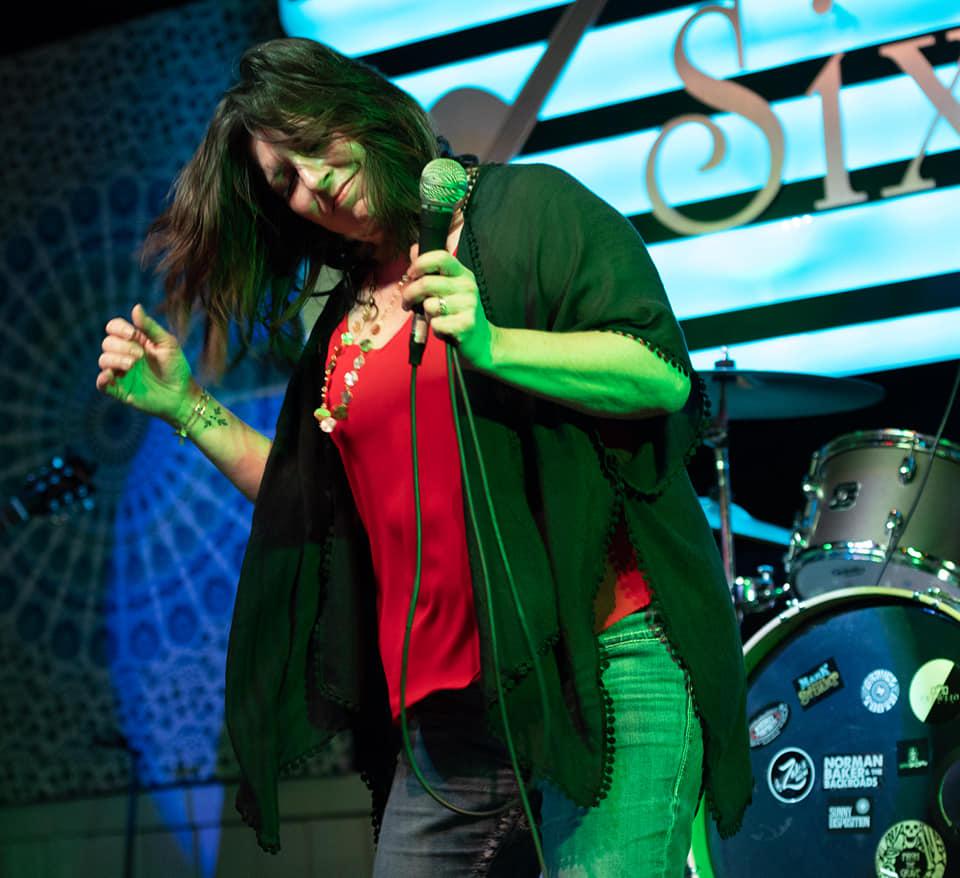 Kim Donnette is the founder, front woman and lead vocalist for the dynamic Blues/Rock group Kim Donnette Band. In addition to being the founding member of Kim Donnette Band and leading it through its successful beginnings, Kim is also the principal songwriter. She creates personal and intimate views of herself in every song she writes. Additionally,  her keen imagination allows her to identify classic blues and jazz songs that are suitable for rearrangement and re-imagination to become uniquely hers.

Kim is the daughter of Teresa Jackson. In 1968, Teresa auditioned to open for Willie Nelson and Ray Price, she sang “Silver Threads and Golden Needles” so well that she won the opportunity to perform at their Dallas Concert. She was also offered the opportunity to join the tour as a member, however she had a young Kim at home and could not bring herself to be separated from her. Kim never had the opportunity to perform with her mother, but has many memories of singing Motown classics in the car together.  This experience influences her sound today.

Kim has been a backup and featured vocalist for the Darby Warren Project and TJ Hammersly.

In 2019, Kim decided it was time to start her own band and begin to perform the songs she loved, create new songs and develop her own unique style and sound. The Kim Donnette Band is the culmination of a lifetime of musical exploration and deep love for music.

Keith Haley brings it all together with his magical guitar riffs on lead. To Keith music “picks you up when you’re down”. His willingness to experiment with sounds, rhythms and riffs transform familiar songs into new and exciting experiences. Keith has a unique play style as he plays without a pick, this is due to neck surgery he had in 2018, that left him unable to hold a pick.

Playing the guitar for more than 40 years, Keith is a meticulous professional in his craft. “If it were easy, everyone would be doing it. The challenge of getting it right is a major thing for me, and I love the thrill when the sound comes together.”

Keith played in many bands throughout the East Texas region in the 1980’s but retired from professional music after that to focus on the family business. Since then he has playing with friends occasionally. We are extremely fortunate to have been able to coax him out of his “retirement” to bring his talents to the Kim Donnette Band

Calling Ron Havelaar a bass player is akin to calling Botticelli a house painter. “Music comes from somewhere deep inside,” Ron said, “Making music with other musicians is communicating on a level that transcends all the superficial things that tend to separate us in Life. It is communication at a very intimate and personal level. I get hooked on those moments when the band is truly “cookin”. Its all about the groove.”

Ron began playing guitar while still in high school in 1964. by 1966 Ron was delighting audiences while playing lead guitar with his first band in Shreveport, Louisiana. He continued refining his craft with various bands and various types of music in South Dakota, Wyoming, Illinois, Mississippi and Texas. During this period he also played guitar for an early punk band called “The Brainsuckers”. “I would wear a beekeeper’s veil while performing our signature song “Creepy Crawly Up the Wally”. I’m thankful that was a long time ago and no photos or recordings have survived. But it was fun!” By the mid 1980’s Ron made the switch from guitar to the bass. He has extensive live performance experience sharing the stage opening for the likes of Koko Taylor, The Muddy Waters Band, Pure Prairie League, Rare Earth, Joan Jett, and Andrew Junior Boy Jones. He is also a sought after session bassist and has played bass and guitar on over a hundred recording sessions for bands and artists at various studios in Texas and Illinois.

His talents, insight and “feel for the groove” are vital for the sound of the Kim Donnette Band. With his deft and exquisite touch, his playing provides groove and deep rhythm that courses through the performance like the final brush strokes on a renaissance masterpiece.

Rodney Beal has been in music since he was in diapers!  Rodney's musical experience goes back to traveling with his dad.  Rodney is not only an amazing drummer but also an accomplished bass player.

He has played country, Motown, blues, rock and gospel.  He has also toured nationally with the band Didley Squat.  He is not only an amazing musician but a pretty nice guy too!