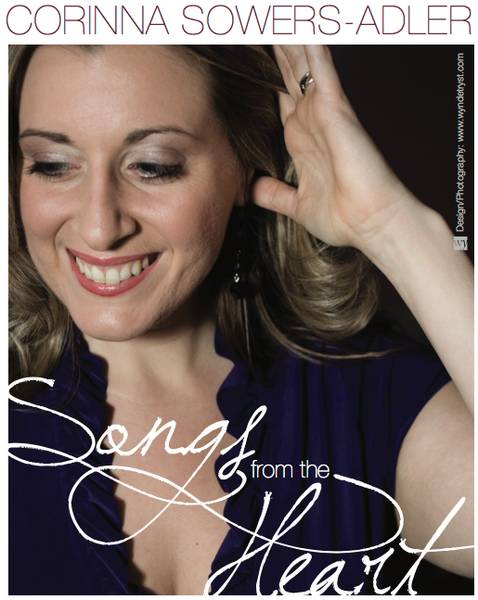 Corinna Sowers-Adler: "Songs From the Heart"

"Songs From The Heart" featuring music by everyone from George Gershwin and Irving Berlin to Billy Joel and Joni Mitchell stars Corinna Sowers Adler who is a well-known professional cabaret singer from NYC. Corinna, having performed her solo shows in many venues including The Triad, Feinsteins/54 Below and Jazz at Lincoln Center's famed Appel Room.

She has been a featured performer five times on the NYC Mabel Mercer Cabaret Convention, most recently singing Bernstein's Glitter and Be Gay on the Rose Theater stage. Corinna is a six time Tony Award Nominee for Excellence in Theatre Education and has been named one of the best voices in New York City!

Corinna Sowers Adler has been nominated for the special Excellence in Theatre Education Tony Award every year since it’s inception in 2015 and made her solo New York Cabaret Debut in 2010 at the Laurie Beechman Theater in “Stories…A Cabaret”.

Since then, Corinna has been in high demand, performing solo shows in NYC in major venues including the majestic Appel Room at Jazz at Lincoln Center where she performed her solo concert entitled “Corinna Sowers Adler in: Something Beautiful”. Corinna has performed her solo shows to rave reviews in theaters across the USA and is excited to be making her Feinstein’s at the Hotel Carmichael debut!

Ms. Sowers-Adler made her Jazz at Lincoln Center debut on the Rose Theater stage as a featured singer at the 24th Annual Cabaret Convention and appeared again in the 25th, 27th and 28th Annual Cabaret Convention presented by The Mabel Mercer Foundation. When not performing, Corinna is proud to be the Founding Artist Director of NiCori Studios & Productions where she creates, teaches and directs students of all ages, specializing in middle and high school aged students.