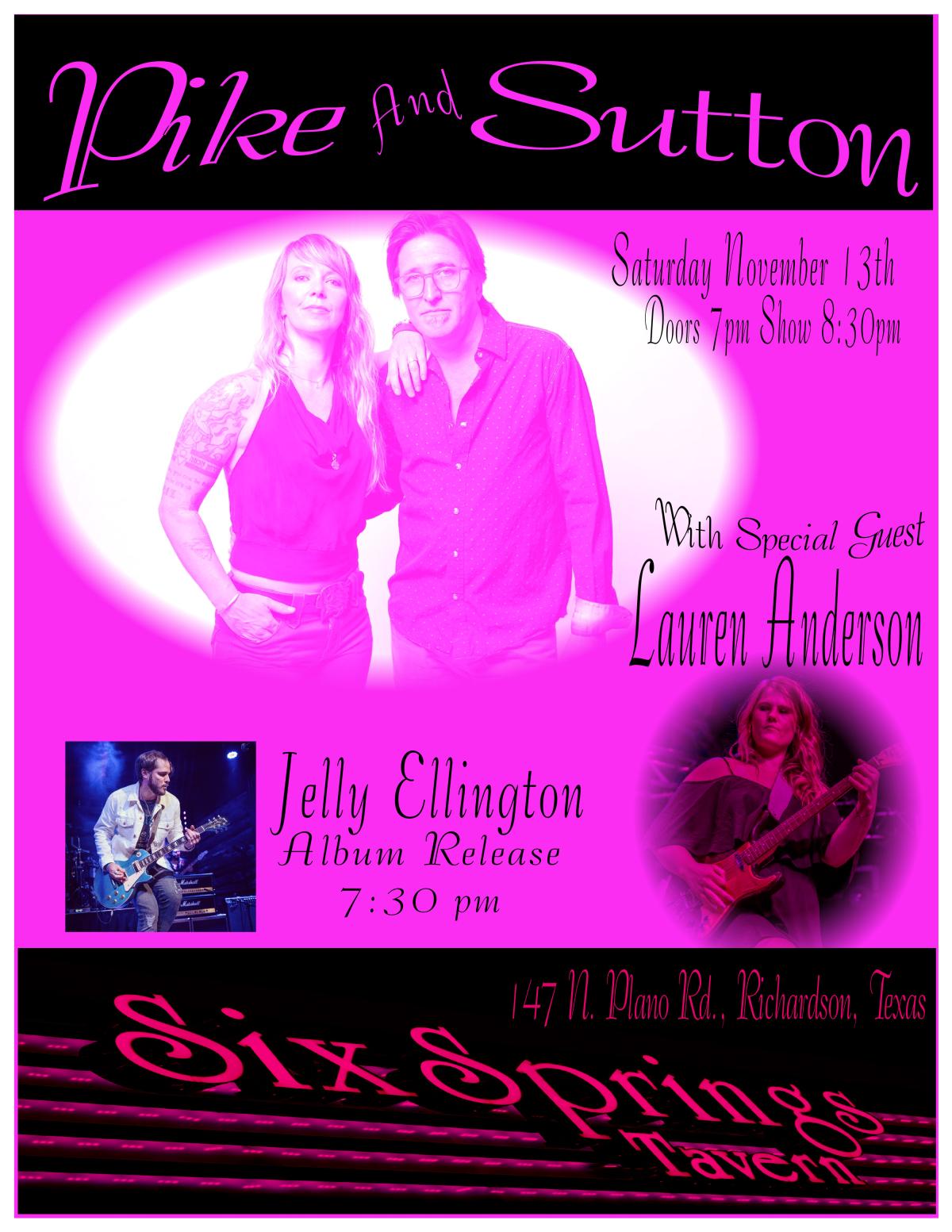 Pike & Sutton is a partnership, a creative evolution and a promise fulfilled. Equally anchored by the powerhouse vocals of Patrice Pike and the electrifying guitars of Wayne Sutton – best known as co-founders of ‘90s seminal jam band/modern rock favorites Sister Seven – their debut album Heart Is A Compass is both a transformative celebration of the pair’s R&B, soul and roots influences and an exhilarating call-to-arms for the faithful.

“Patrice and I started making music together in 1990,” Wayne says. “Our first handful of shows was as an acoustic duo. When we formed Little Sister/Sister Seven, we wrote as a band. But Patrice and I haven’t written and recorded an entire album together until now. Neither of us had a grand vision; we just assumed it would be eclectic and that it would happen organically, because that’s who we are.” Co-produced by Pike, Sutton and Grammy-winner Jim Watts – known for his work with Emmylou Harris, Ben Harper, Jenny Lewis and Kelly Clarkson – the album crackles with passion, vision and undeniable hip-shaking rhythms. “There’s something that happens when you make music together for a long time,” Patrice says. “This album is exciting because it sustains the connection we’ve had since we were teenagers, and proves that the music we make remains meaningful not only to us, but for our audience too.”

The album also features friends like Robb Kidd of Golden Dawn Arkestra on drums, John Bush from Edie Brickell & New Bohemians on percussion, Laura Mace from the Foo Fighters’ touring band on harmony vocals, Jay D. Sties on keys, and Little Big Town music director John Thomasson – an original member of Little Sister – on bass. “The recording was spontaneous,” Patrice explains. “We went in with somewhat of a road map, but it was our communication that ultimately found the groove. The record is full of the kind of instrumental elements that you don’t often hear in rock, like hand percussion, djembe and programming that serves the actual beats. The entire process enhanced the album’s message: when you surrender to your heart, it tells you where to go.”

It’s where Pike & Sutton have been that unquestionably informs where they are today. As Little Sister/Sister Seven, they ruled clubs and festivals throughout Dallas, Houston and Austin as the most melodically riveting jam band in the southwest. With their two major label albums – 1997’s This The Trip and 2000’s Wrestling Over Tiny Matters on Arista/Austin, featuring Pike/Sutton-penned hits like “Know What You Mean,” "The Only Thing That’s Real” and “Under The Radar" – the band’s musical evolution took national stages alongside artists that included The Allman Brothers, Sarah McLachlan, The Neville Brothers, Ray Charles, Chris Isaak and Dave Matthews Band. “We started out on the H.O.R.D.E. Tour and finished up with Lilith Fair,” says Wayne. “After Sister Seven ended, I co-produced the Patrice Pike & The Black Box Rebellion albums, she sang on my first solo record, and I played with her whenever she performed in Austin. It’s always been a strong friendship, and we’ve been through so much together.” Yet even when they took extended individual breaks – Wayne to raise a family, Patrice to gain custody of and care for her critically ill niece – the two always knew music would bring them together again. “The songs that Wayne and I wrote for this album were absolutely informed by our life experiences,” Patrice says. “Sister Seven made some powerful music, but it was reflective of how angst-y we were in our 20s. Our new album carries a grown-up sense of hope.”

It’s on standout songs like the rousing “Take A Stand”, the roots-funk sway of “Let The Music Get You High”, the intense slow-burn of “Hands Up” and the album’s intimately affecting title track – which incorporates the heartbeat of Patrice’s niece as she prepared for a life-saving bone marrow transplant – that the music’s call-to-action truly takes flight. “The record has a political edge,” Wayne explains, “but it’s not angry or reactionary, and definitely ties in with the best of our Sister Seven vibe. The message of the importance of coming together, to make the world a place we want it to be, is a real thing.” Heart Is A Compass is also an incredibly soulful record; Sutton’s distinctive guitar tones deliver deeper textures and more expressive peaks than ever before, while Pike’s always-formidable voice – Billboard calls her “one of the finest contemporary rock singers in America” – has now richened into a remarkable instrument of prowess, emotion and truth. “There’s a message that’s encapsulated over and over again in these songs,” Patrice says. “It’s an honest acknowledgment of our world situation, but it also speaks to pathways forward.” And with their respective commitments to locally-based education and activism – Wayne as a songwriting & music ensemble teacher in the Austin school system, Patrice as co-founder and executive director of The Step Onward Foundation – the pair continues to prove how their collective music and worldviews influence each another in enduringly potent ways. “The key,” Patrice says, “is listening to your heart, trusting our communities, and taking care of each other.”

With the release of Heart Is A Compass, Pike & Sutton’s shared journey begins a joyous new direction. They remain formidable live performers, as heard on their popular 2019 EP The Evolution Of Pike & Sutton Live and seen in their triumphant return to this year’s Austin City Limits Music Festival, and are eager to now play these songs for longtime followers and new fans alike. “There’s no guarantee that it’ll happen every night,” Wayne says, “but those shows when Patrice and I and fully connected are magic. Through the ups-and-downs, through our individual struggles, that’s always been there. And it may work better than ever.” And as with all great journeys, it’s not the destination but what’s discovered along the way that matters most. “There’s still a lot of love out there for what Wayne & I do,” Patrice says, “and there’s a lot of full circle in this album. We want to keep making records, playing shows and bringing a message that hits you over the head sonically. People are looking to feel uplifted, but they want to shake their hips, too. We’re calling it the way we see it, and music will be our medicine.”

This soulful rocker, originally from Chicago, has had a passion for singing throughout her entire life. Growing up in a household that was rich in music, her influences were widely varied from artists such as Susan Tedeschi, Bonnie Raitt, The Pointer Sisters, Eva Cassidy, Etta James, Joss Stone, Jason Mraz, Black Eyed Peas, Christina Aguilera, and many more.

Despite these modern musical influences, Lauren was classically trained throughout most of her early life. She began classical piano lessons at the age of 8, was an active member of several choirs and began taking classical voice lessons when she began high school. She eventually took her love of singing to the Quad Cities and obtained a bachelors degree in music with an emphasis on voice at Augustana College. Initially she planned on becoming an opera singer, but quickly realized that rock and soul music were more her style.

Having listened to those around her, telling her that music and the arts were difficult fields to have a career in, Lauren followed the safe path in life, making sure she had a "back-up" plan while working on her music and performing. This lead her to The University of Kansas to complete her masters degree in music therapy. She worked for several years as a music therapist on a pediatric unit and at a school for at-risk youth in Kansas City. However, even with a steady job she found that passions don’t die easily, and despite her love of working as a music therapist, she was ready to take on the challenge of making music performance her career.

After officially completing her masters in 2012, Lauren began performing solo gigs around the greater Kansas City area and eventually put together a full band. She released her first official EP, “Do & Hope”, in August 2014.  Fittingly, this EP was named after the unofficial motto of Lauren’s mother’s side of the family, who often remarked, “Just do it and hope it turns out okay.”

Lauren released her first, full-length CD titled, "Truly Me" in August 2015. And two singles, recorded in the legendary Ocean Way Nashville Studios, in 2016. Shortly after these releases she finally made the leap into becoming a full-time musician and moved to Nashville in February 2017.

Since moving to Nashville, Lauren has continued to tour in support of her most recent EP’s, “The Game” & “Won’t Stay Down”, available on all platforms. For more information and to stay up-dated sign-up for her monthly newsletters.