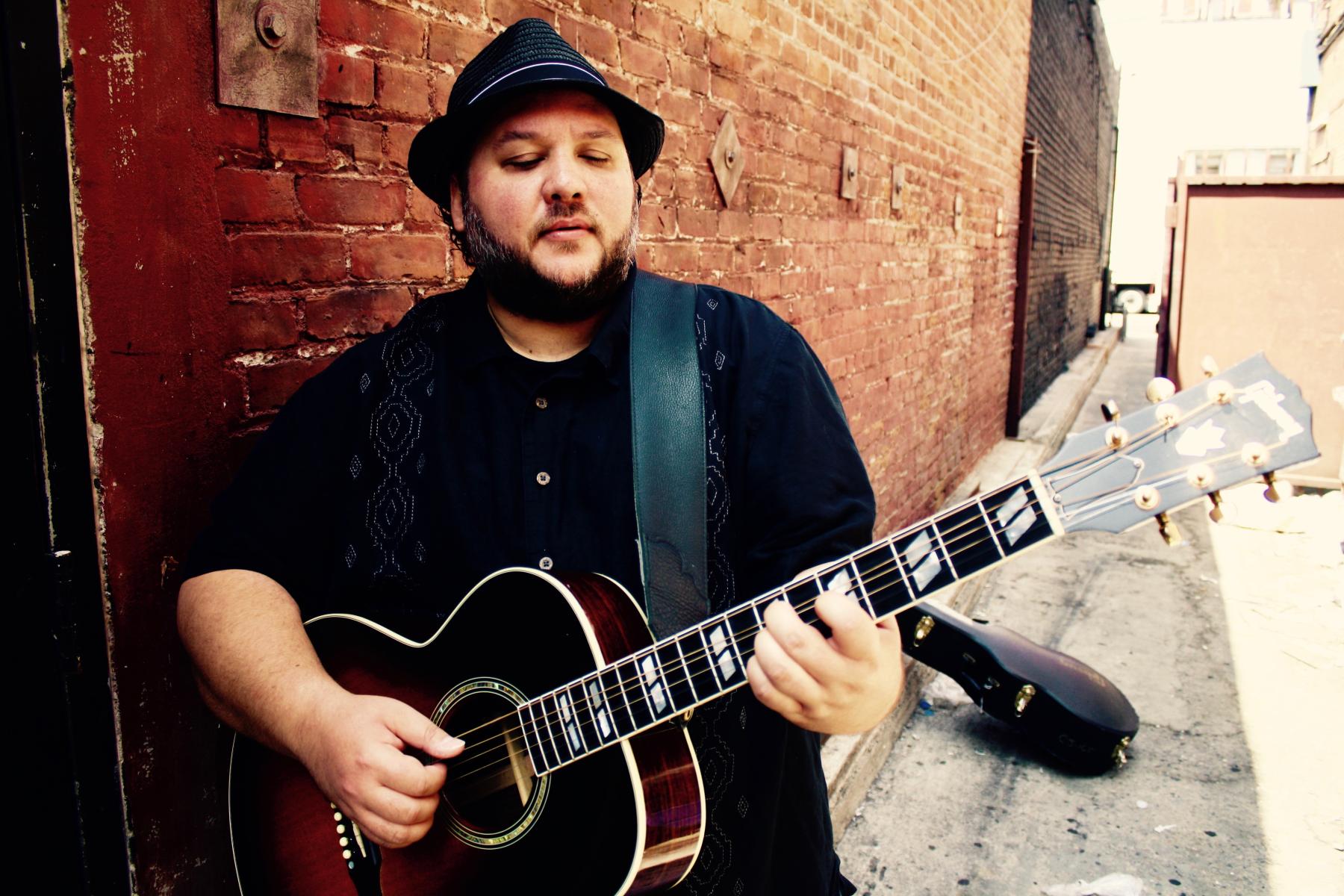 MUTLU
With his silk-like vocals, Mutlu showers over melodies like rain. A Philadelphia native, Mutlu combines his innate Philly-soul style with elements of folk, reggae and rock. This cohesive blend of music creates a rare and retro sound that is entirely timeless.

Mutlu has already made substantial headway with his high-caliber soulful sound. He's collaborated and toured extensively as a support act with legendary duo Daryl Hall & John Oates. He also holds the distinction of having made the most guest appearances on Daryl Hall's acclaimed, award-winning TV show "Live From Daryl's House". Mutlu has toured as a support act and longtime collaborator with noted singer/songwriter Amos Lee, and has shared stages with Adele, John Hiatt, Leon Russell, the Blind Boys of Alabama, Todd Rundgren, Shuggie Otis & many more. Additionally, he was the support act on the North American leg of Joe Jackson’s acclaimed “Rain” tour.

Mutlu’s latest release is a 7-song collection entitled: Good Trouble. Mutlu co-produced the record with songwriter/producer Darius Amendolia. Additionally, Good Trouble was mixed and mastered by Grammy winning producer/engineer Phil Nicolo. The album features the lead soul-folk single “Lifeline”. The empowering track touches on the search for unity within a divided society. Mutlu hones in on the importance up standing up for justice and equality. Other songs like “Scarred” and “Work For It” discuss the mind’s worst enemies between depression and self-doubt. Mutlu empathizes these feelings and offers something real and relatable to listeners.  Good Trouble also includes “Nothing In This Whole Wide World” featuring John Oates, a song that channels that classic, 1970’s Philly-soul sound. The track was co-produced by John Oates and Hall & Oates guitarist Shane Theriot, and includes Hall & Oates band members Brian Dunne (drums) and Klyde Jones (bass).

“I definitely wouldn’t say it’s music writing,” says 18 year-old singer/songwriter Julia Bhatt coolly.  “I genuinely just fuck around on the guitar until I play a string of chords that makes me feel good, I guess.”  While it may sound like chance or luck, Julia’s preternatural ability for writing duct-tape sticky melodies is far more than luck… it’s talent.  “Once I have that, I just kinda go off. Usually, if I don’t write the song in 10-20 minutes, it’s not a winner.” Based on the handful of songs that she has recorded and has unleashed onto the public, her creative 10-20 minute blocks are pretty solid. “If I don’t love it, what’s the point of releasing it?”

Already a buzzing artist in the indie/alt-pop underground, Julia has been getting praise from such indie tomes as Earmilk who says she “is quickly finding herself in the conversation of alt- pop's surging artists, a genre that continues to dominate playlists. Bhatt's edge is in her rhythmic tracks, which are dance-inducing, borrowing for sure from the dance-crazed culture of her hometown of Miami—a wonderful tinge.” SKOPE Magazine points out her “slinky lounge-esque r&b groove that makes Julia’s sultry, flowy vocals shine bright, leading into a sense of urgency.” These are just two voices in a sea of adoring media fans.  Less than a year releasing music publically, Julia has already been turning heads.

Born in Boston, MA but living practically the whole of her young life in Miami, FL, Julia was raised on a stimulating and expansive musical diet – her first musical memory is of being overwhelmed to tears at a Shakira concert in 2006 when she was a wee 4 years old. She grew up listening to everything from classic rock, American songbook standards and bossa nova beats. She and her sister accompanied their mom to numerous concerts, including The Beach Boys, America, the Dave Matthews Band, No Doubt, Sting, James Taylor, and the Rolling Stones, among many others. It was this variety of rhythms and melodies that helped shape the wide-ranging music she creates.

“I definitely owe a lot of my music taste to my family,” she explains. “I grew up with my parents’ love of 60s/70s music, with my mom specializing in more of the classic rock side, whereas my dad showed me the smooth yacht rock side of the 70s. As I got older, my sister really influenced my music taste, because I’d just listen to whatever she did. (Luckily she has good taste). As for lately, I have Spotify to thank for all my weird discoveries.”

Infused with the broad array of influences from the music with which she grew up, Julia has an ear for unique sound and style.  With a powerful voice reminiscent of Amy Winehouse and Macy Gray, Julia writes engaging, fun hooks with great beats, juxtaposed with honest storytelling that reflects observations about teenage life in the melting pot of Miami, as well as reflections on her on-going struggles with depression.  Her rich, soulful, playful voice delivers new energy and impact to classics that she covers.

Her bossa nova-infused debut single, “Tall,” caught many by surprise, including Elevator Magazine who quipped, “over warped, over the top production, her vocals are commanding, forcing the production to obey her.” Her lustrous single “Marco” was praised by The New Nine who said Julia “has this sweet vulnerability that we can't get enough of, but the song radiates strength.”  Of her powerful “heart-thumping single” “I’m Cool”, VibeMyLife goes as far as calling her a “prodigy” who “showcases her natural talent for delivering earnest songwriting through inescapably catchy melodies.”

Her partnership with producer and mentor Elliot Jacobson (a much in-demand producer who has worked with Ingrid Michaelson, Elle King and Vérité) was one crafted from chance. “I met Elliot through my music lawyer, Janine Small.  I was working with her on a contract and she sent me Elliot’s contact and essentially said ‘Here. Y’all would be good together. Talk.’ From there, Elliot and I exchanged ideas and that started me on this new and exciting path.”

Since 2016, Julia has performed locally in Miami including her very first job - a weekly gig at a popular restaurant in the Coconut Grove neighborhood, where she played straight through for three hours at a time.  She collaborated with friends to perform in a number of combinations at her high school’s Rock For Relief concerts in 2016 and 2017.  She has played on Miami Beach’s Lincoln Road stage of the Miami edition of the annual global Make Music events in June in 2018 and 2019, and at one of Miami’s newest, hippest venues, The Citadel, in July 2019, and has played (and has many more upcoming) gigs for SoFar Sounds in New York and Philadelphia.

While she’s been building and creating a formidable foundation for her very promising career ahead, it’s hard to remember that she is, after all, a 17 year-old… one with not only a whole lot of talent but also a wealth of musical knowledge to draw upon, which she’s been building since she was a toddler.  On a trip to the original Hard Rock Café location in London when she was five, the curator bent down to talk to her, not knowing what he was in for.  Talking down to her, thinking he was speaking with a normal 5 year-old, she ended up dazzling him, answering questions about Elvis, The Who, and the Beatles.

Absorbing all this musical knowledge into herself and bursting with creativity to write and record more new music to build upon her exciting fresh batch of songs dropping starting in September 2019, Julia is ready to debut her material onto an unsuspecting world.  But she herself doesn’t know what to expect either.  “I don’t really know when my voice is at its best because I have a pretty self-deprecating view of myself, but obviously I’m working on that,” she says shyly, exposing her first bit of teenage uncertainty.  “I mean, hell, I wouldn’t be right here if I didn’t believe in my music.”

Deer Fellow is an indie folk-pop duo with a “keen sense of songcraft.” Based out of Austin, bandmates Matt Salois (guitar, vocals) and Alyssa Kelly (violin, vocals, piano) met at an open mic and were quick to collaborate. Fast forward to present day and coupledom, the two have built a cross-genre sound that “pulls you in right away, stirring romance and broken hearts.”