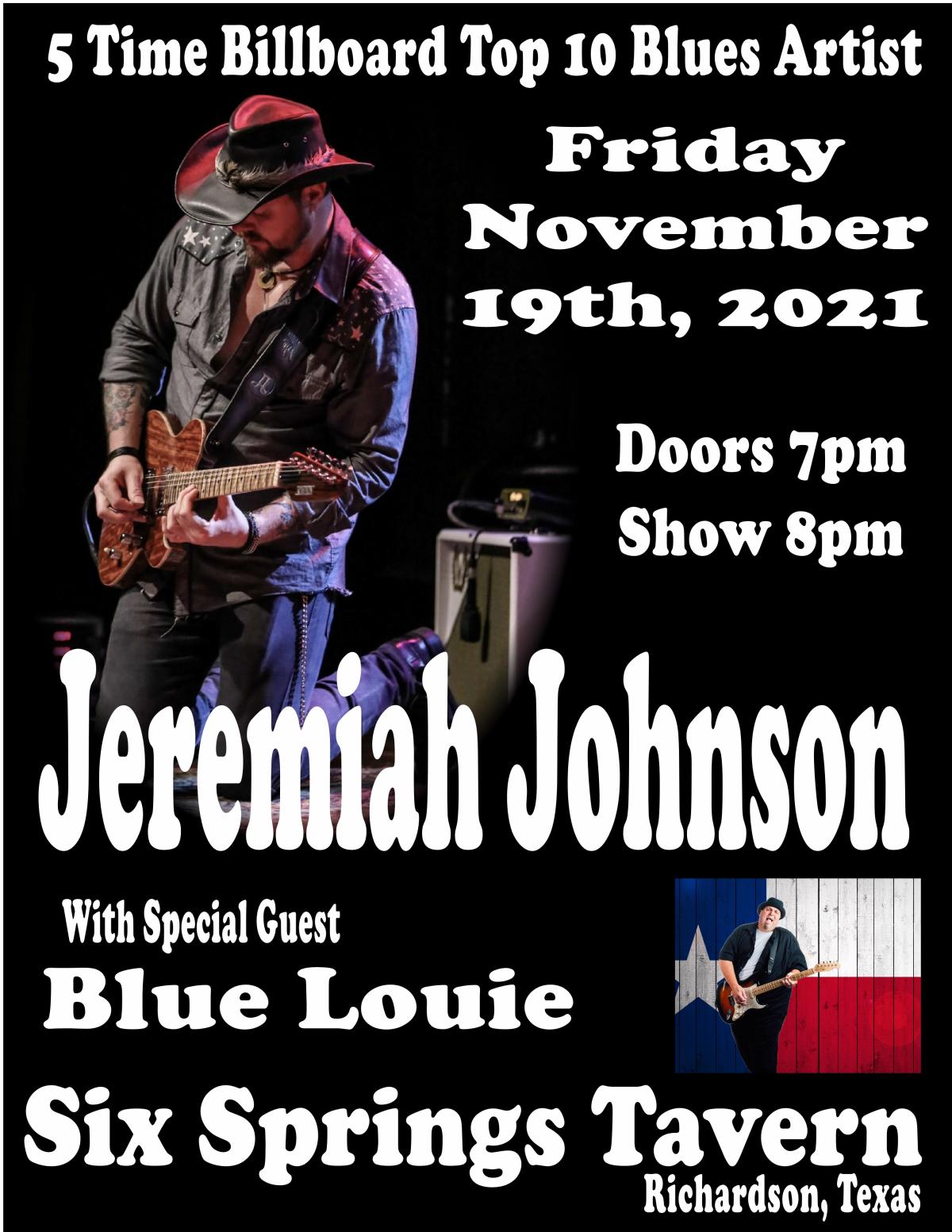 Born and raised in St. Louis, Jeremiah Johnson is the voice of Mississippi River blues blending with the struggles of everyday life.  He began learning guitar at age 6, drawing inspiration from his rich St. Louis blues heritage and legendary guitarists, like Alvin Lee, Eric Clapton and Hank Williams Sr. and Jr.  With these influences, Johnson began building his musical foundation.

After relocating to Houston, TX, in 1999, Johnson finished in first place for three consecutive years at the Houston Regional Blues Challenges, sponsored by the Houston Blues Society.  Johnson returned to St. Louis in 2009, and merged Texas style with STL blues to create the unique sound you hear today.  The 10 years Johnson lived and performed in Texas changed his musical style in ways you can still hear in his music today.  In 2011, Johnson was the proud winner of the St. Louis Blues Society IBC Challenge and went on to the semifinals to represent St. Louis in Memphis, TN.  One year later, Sirius XM's B.B. King’s Bluesville picked up the Jeremiah Johnson Band, where they can be heard nationwide, and they have been playing his music ever since.  You can also hear Jeremiah Johnson on Touch Tunes Jukeboxes in bars/clubs across the US and on radio stations around the world. In September 2014, Johnson filmed his docu-concert, Ride the Blues, directed by Australian Producer/Director Gary Glenn, at the historic Capitol Theater in downtown Burlington, IA.  The film is live music video about Johnson’s rise to prominence, featuring intimate interview segments, still photography, guitar solos and stunning vocals.  Donations from concert attendees were generously given to the theater and to the National Blues Museum, connecting Johnson’s roles of musician and music advocate. 2014 Johnson records Grind, produced by Devon Allman, features Grammy award winner Yonrico Scott on drums.  Grind has been featured on SiriusXM's B.B. King’s Bluesville, and on the international radio show “Confessing the Blues”, broadcasting on 50 stations in 10 countries worldwide.  Grind reached the #8 slot on the Billboard Blues Charts the week of November 7th, 2015.

Johnson follows the success of Grind with a self-produced release, Blues Heart Attack, released worldwide on July 22, 2016. This unique record is a blend of Johnson’s entire musical career. “It’s a combination of our earlier works, and then Grind,” he explained. “There’s horns and keyboard reminiscent of Brand Spankn’ Blues, but also some heavy guitar driven tracks. It’s the evolution of everything in a Blues Heart Attack.” Special guest performers include Tom ‘Papa’ Ray on harmonica, and Nathan Hershey on keys.  Blues Heart Attack reached #5 on the Billboard Blues Charts following its release in 2016.

After signing a record deal with Ruf Records in March of 2018, Jeremiah immediately went to Texas to record his debut Ruf Records release, Straitjacket, with BMA award winning Mike Zito producing.  Straitjacket debuted #1 on iTunes New Blues Releases and #6 on Billboard Blues Album Chart and has been in the top of the Roots Music Report ever since.  After a European tour with Mike Zito in the Beginning of 2019 and then followed by a Northeastern USA tour with Zito again, Johnson has truly electrified a whole new audience.

Johnson released, "Heavens to Betsy", his 2nd Ruf Records Release on February 14th, 2020.  Johnson started out 2020 touring with the Ruf Records Blues Caravan 2020 and separately with his band though out 2020.  Then the Covid-19 Pandemic shut down the industry worldwide.

Jeremiah Johnson takes the dangers of the COVID-19 virus as seriously as his music career.  But no matter how you look at it, the 2020 Covid-19 pandemic has effectively put him out of work.  “Unemployed Highly Annoyed” is Johnson’s response to the adverse situation.  2020 started the year on a high note when his Ruf Records release, “Heavens to Betsy”, debuted at #3 on the Billboard Blues Album charts and soon climbed to the coveted #1 spot by April 11th.   With a #1 record and 70+ European Tour dates scheduled with the “2020 Ruf Records Blues Caravan”; Johnson was set to have a breakout year before everything came to a crashing halt.  Quarantined at home for months, Johnson decided it was time to get creative.  “Being forced into unemployment has been beyond frustrating.  I decided to produce an album of songs inspired by the “Covid-19 Pandemic” and try to turn the roller coaster of emotions into something musical.  This is truly a concept album.” Johnson exclaims.   The final product is a first-class Blues/Roots Rock record that is packed full of stunning guitar work coupled with soulfully passionate bluesy southern vocals.  “Unemployed Highly Annoyed” is a striking musical reflection of the times that delivers a message the entire world can relate to.

Jeremiah Johnson blends the sounds of the south, with Mississippi River blues and a touch of country flair. Emotionally charged southern blues rock, powered by the common man’s passion for life and all the struggles in-between. Songs with meaning, a powerfully persuasive voice and master class musicianship.  “Unemployed Highly Annoyed” has caught lightning in a bottle with this masterful snapshot of these difficult times and is truly a testament to his talent.  Possibly the best record of Johnsons career, born from the most challenging time in his life as a musician.

Blue Louie was formed in 1995 by Louie Jerger (vocals, guitar) and Marc Turner (guitar). Joined by Charlie Bullard (drums) and Jason Rasberry (bass guitar) the band quickly became a seasoned professional touring act. The band set out to bring a unique, high energy, brand of Texas blues-rock to the U.S. and Europe, from L.A. to Memphis to Paris, Moscow and Madrid. The veteran Texas blues-rock band continues to tour and are presently working on a new release set for early 2019.

“Texas boogie and blues bounce out full-force from Blue Louie. A hint of gravel in the production for that beer drinking, booty-shaking feel. A real Texas feel throughout and a perfect melding of blues with Southern-fried rock.” -Blues Revue

Blue Louie, aka Louie Jerger, was introduced to the Blues in his hometown of Tyler, Texas.

Louie Jerger got his first guitar when he was eight years old. He did not actually begin playing it until his teens, at a time when Ozzie Osbourne and Poison posters instantly turned any normal, suburban garage into a rehearsal studio. But one day, as he walked out of his family home in Tyler, Texas, he heard a strange sound coming from the park down the street. He turned and walked towards it curiously. He liked it immediately, even though it was far from the spastic, thrashing melodies he currently played. It was lilting, it was rhythmic, it was soulful, it was Blues.

In that park, he would also find his first music mentor who patiently taught him the art of Blues, and at nineteen Louie moved to New Orleans and began an established career with Pig Pen and the Pork Chops; at the height of their career, the band played along Dr. John at the House of Blues.

Family obligations brought Louie back to Texas, where he met Mark Turner at an open mic night. Together they formed Blue Louie, began writing songs, and they still play together almost twenty years later. Blue Louie toured the United States and Europe and released their first album in 1997 through Breakaway Records. More CDs would soon follow.

The music business is just that, a business, full of bookings and promotions, sales and persuasion. Fortunately, the interpersonal skills of Louie Jerger served Blue Louie and their success just as well as his musical talents. They traveled from town to town for months on end, sometimes not even quite sure where they would be playing until the day they arrived.

But Louie does not know any strangers, only friends he has not yet met, and thus Blue Louie was rarely without a stage or an audience. While taking breaks from touring, Galveston, Texas was often a place where they would come to relax and unwind from their adventures as road warriors, and most trips also ended up with an impromptu performance at places like the old M&M or Java 213. They even developed a bit of a following here on the Island, with a group of loyal fans affectionately dubbing themselves the “Blue Losers.”

And on any given night, you will find many of his loyal followers who have affectionately dubbed themselves the ‘Blue Losers.’ But since the last time we saw Blue Louie, he has added a few new surprises for his faithful entourage. “I have been learning new songs and have written a couple of new ones, too,” he says, but the most interesting layer he has added to his performances comes in the form of a slideguitar. Recently at a gig, a guy brought in his homemade cigar box guitar, and with one strum Louie was hooked. “I just thought it was the coolest thing ever,” he says, and he quickly added the quirky instrument to his collection of music makers and even built his own, set to be the focal point of his upcoming shows.