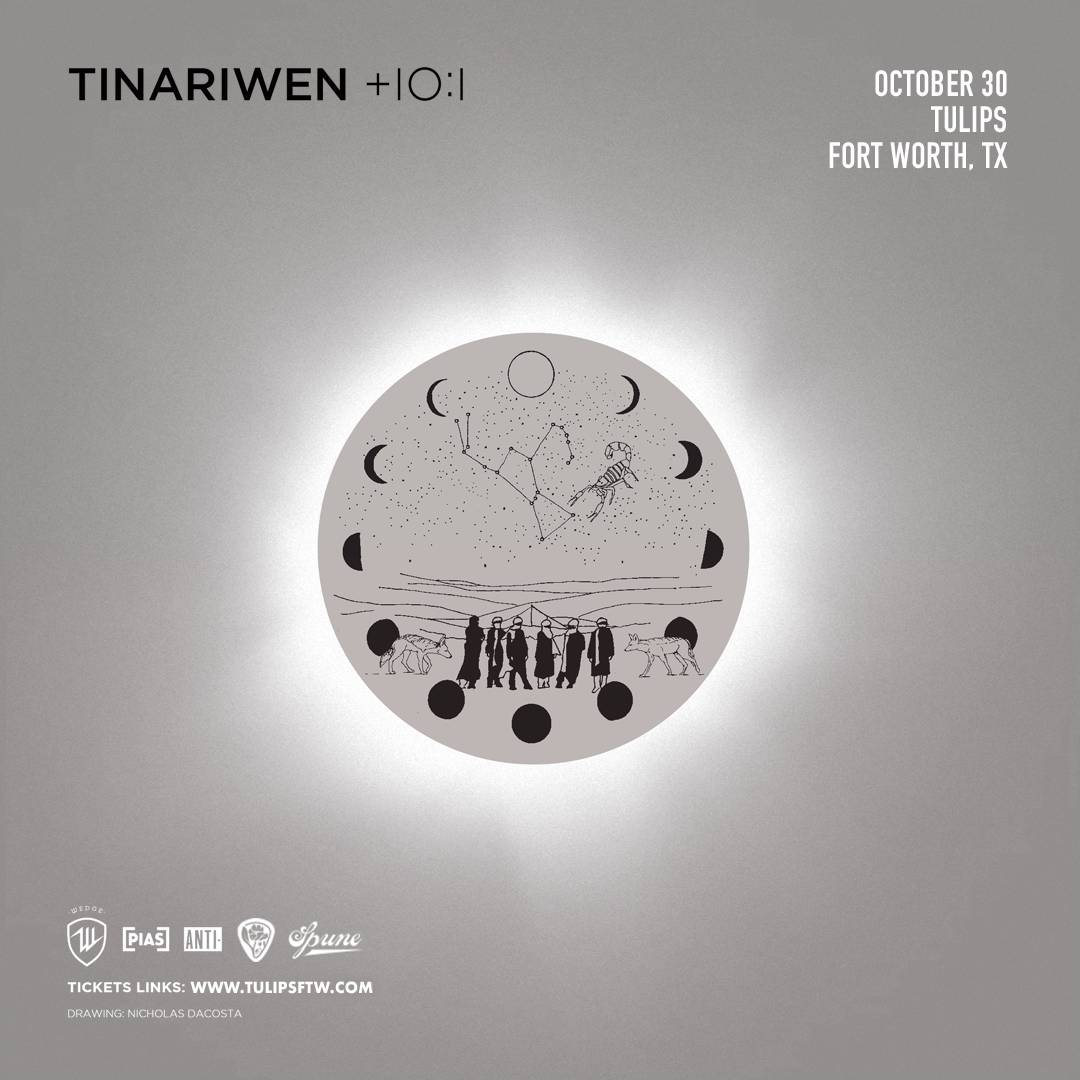 The best Tinariwen album hasn’t been recorded yet. Perhaps it never will be. Because the best Tinariwen music isn’t the music they perform in front of microphones. It’s the music they play at night around the fire, back in their own country, amongst themselves and at their own pace. Having eaten, and drunk their tea, the men bring out their guitars, chat, remember old songs and let the music come. In those moments, the music can become like the fire, free, magical and impossible to stuff into a box. It rises up like a shower of sparks or a state of grace, without premeditation; the momentary manifestation of a friendship, a community, an environment, a history; the revelatory connection with something that belongs only to them, and goes beyond them. Their discography stretching out over the last 17 years, all the tours and the international recognition have changed nothing: Tinariwen are still a desert band, only certain aspects of which the western music industry can ever hope to capture and present. Tinariwen existed long before any of their albums were recorded, and they still exist quite distinct from their discographic dimension. So, the best Tinariwen album doesn’t exist. But it’s still worth trying to go and find it.

The story of Amadjar, the ninth Tinariwen album, begins at the end of October 2018, at the Taragalte Festival of nomadic cultures in the Moroccan Sahara. After a concert and a sandstorm, Tinariwen hit the road and head for Mauritania, via southern Morocco, Western Sahara and the Atlantic coast. The destination is important (the band have to set up and record their album there, and hook up with the singer Noura Mint Seymali), but no more so than the journey itself. Tinariwen are joined by their French production team, who arrive in old camper van that’s been converted into a makeshift studio. The journey to Nouakchott, capital of Mauritania, takes a dozen days or so. Every evening, the caravan stops to set up camp and the members of Tinariwen get to work under the stars – a whole lot better than being in a studio after all – to prepare for the recording, talking things through, letting their guitar motifs, thoughts and long buried songs come. Then, during a final camp in the desert around Nouakchott that lasts about fifteen days, to an audience of scorpions, the band record their songs under large tent. In a few live takes, without headphones or effects. The Mauritanian griotte Noura Mint Seymali and her guitarist husband, Jeiche Ould Chigaly, come to throw their musical tradition on the embers lit by Tinariwen – the curling vocals of Noura Mint Seymali on the song ‘Amalouna’ will become a highlight.

This nomadic album, recorded in a natural setting, is as close as you can get to Tinariwen. And also, therefore, to the idea that things can evolve: bassist Eyadou plays a lot of acoustic guitar; percussionist Said tries his hand at new instruments; Abdallah exhumes songs that he’s never played on stage with Tinariwen. And that violin that appears on several songs and reminds you of the traditional imzad? It’s actually played by Warren Ellis. The violinist in Nick Cave’s band is one of several western guests on the album. We also hear the mandolin and charango of Micah Nelson (son of the country music giant Willie Nelson, and Neil Young’s guitarist), and the guitars of Stephen O’Malley (Sunn O)))), Cass McCombs and Rodolphe Burger. The album is mixed by Jack White’s buddy Joshua Vance Smith.

In the end, Amadjar tells the story of several journeys: the one undertaken to prepare the album, and the one that Tinariwen take between two worlds, theirs and ours, with that constant need to pass from one to the other before coming back to the roots. “I’m in a complete solitude, where thoughts frighten me, and lost in their midst I arose and noticed that I was thirsty and wanted water,” sings Ibrahim on ‘Ténéré Maloulat’, the first song on the album. A return to the source of Tamashek poetry. In the middle of other more political songs, through always desolate, these words express deep distress and survival, but also movement. Amadjar means ‘the unknown visitor’ in Tamashek, the one who seeks hospitality and who’s condemned to an inner exile, within a territory or within himself; just like the members of Tinariwen, who feel at home on the journey, around the fire with a few immutable songs. The best Tinariwen album will never be. But Amadjar is more essential than all the others.