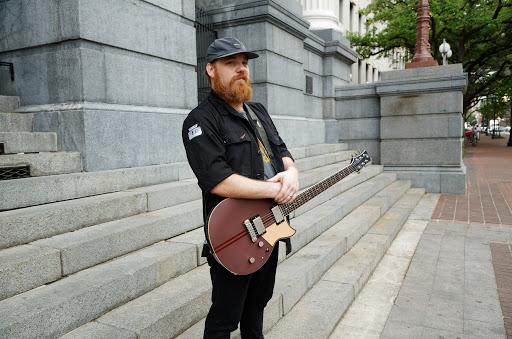 Momentary SetbackThe son of Boogie Kings guitarist (and Louisiana Hall of Fame member) Ted Broussard, singer/songwriter Marc Broussard was seemingly destined for a life as a music man. His upbringing in Lafayette, Louisiana instilled in him an affinity for R&B alongside the Cajun trappings of southern Louisiana. Drawing vocal and stylistic influence from Otis Redding and Brian McKnight while bearing the preternaturally gruff vocals of John Hiatt and Dr. John, Broussard was barely 20 at the time of his first album's release. Momentary Setback appeared to encouraging reviews on the independent Ripley Records label in September 2002. Soon afterwards, the young musician inked a deal with Island Def Jam.

Light of Day: A Tribute to Bruce SpringsteenWith Island's support, doors began to open for Broussard. "Just Like That," a track from the Momentary Setback album, was culled for inclusion in the 2003 Lost and Found, Vol. 1 compilation alongside such artists as Ryan Adams and the Jayhawks; that same year, Broussard also appeared on a Bruce Springsteen tribute album, Light of Day, with the track "Back in Your Arms." He spent the autumn of 2003 on the road, where he served as opening act for the Dave Matthews Band, Maroon 5, and fellow singer/songwriter Gavin DeGraw. Carencro, a sophomore album named after Broussard's hometown, was issued by Island Records in 2004, and he made the jump from Island to Atlantic Records four years later for the release of Keep Coming Back. He became a road dog after the album's release, opening for and sharing stages not only with Maroon 5 and the Dave Matthews Band but also with Willie Nelson, O.A.R., and Bonnie Raitt.

A Life Worth LivingIn March of 2011, two songs, "Lucky" and "Only Everything," were issued for digital download as a precursor to his Jamie Kenney-produced self-titled album, which appeared in July and also signaled his move to the Vanguard label. It was followed in 2014 by Life Worth Living, a more stripped-down effort that drew raves from critics. In September of 2016, he announced that 50 percent of the sales of his S.O.S. II album would go to charities that primarily served the homeless and hometown organizations like City of Refuge. Released in 2017 on G-Man, Easy to Love placed inside the Top 25 on the Top Independent Albums chart.

​​by: Diana Finlay Hendricks, author of Delbert McClinton's biography, One of the Fortunate Few

Superlative, powerhouse, smart and savvy are only a few of the adjectives used to describe Shelley King, who is debuting her 9th album, Kick Up Your Heels, in the late summer of 2019.

The blues, roots-rock, gospel singer stands out in the crowd as an award-winning songwriter, steeped in Americana music. Born in Arkansas, and raised back and forth between Arkansas and Texas, Shelley has surrounded herself with A-list mentors from Marcia Ball to John Magnie and Delbert McClinton.

Shelley says, “It feels like a party album.  In a time when we have so many challenges as a people and as a country, we need this music. We can let it all go. We all have a weight to carry, but we need to have some fun. I feel that in some of these songs, there are trials and tribulations, but with good music and good friends, it always feels like we are going to come out on top.”

Kick Up Your Heels runs the gamut of emotions, beginning with an introspective memory of one of her musical heroes, Levon Helm. The album’s opening track, “Levon’s New Drumset” had its beginning as she was sitting on a porch in Woodstock, New York, collecting words and images for this song but not completing it. Over several more trips to Woodstock she reworked the lyrics, each time adding a little more to the story.  Inspiration struck again when she was playing a Midnight Ramble with the Woodstock Lone Stars: a super-group including Carolyn Wonderland, Marcia Ball, Cindy Cashdollar, Amy Helm, and a Woodstock based rhythm section. “It completely fell together - magically.” she recalls. “I wrote another verse right there, and it came together seamlessly, without a wrong word.”

“Storming in the South” takes the listeners through the hurricanes that rip through the South and the high winds in a relationship between two people who have chosen to take it on, go through it together, and come out on the other side. It is a song of resilience, and of sticking together, and making it through the storm.

The album brings on the party full-force with “Hurricane Party.” Shelley said she was walking on a trail near her Texas hill country home, when her friend and mentor, Marcia Ball called to say her Florida tour was canceled because of a hurricane, “so, let’s play dominoes.” Shelley said, “It’s a hurricane party!” and immediately started working on this song. She sang lines into her phone, texting song verses back and forth, co-writing with Marcia, it all came together before she got off the trail – in time for a game of dominoes!  Delbert McClinton and Marcia bring guest vocals to this highlight of the album. It’s definitely a party.

Levon Helm and Henry Glover wrote a song called “Blues So Bad,” that Shelley discovered on a 1977 Helm album. That song stuck with her. “Anytime I heard it, I sang along. It makes me feel cool. In the studio, Delbert (McClinton) played harmonica and sang backup on it.”   Yeah, that’ll make anyone feel cool.

“One Shot At A Time” is a song Shelley wrote years ago about a bar in San Angelo, Texas.

“People were having a good time and were so drunk.” she recalls. “They were sending shots to the band and eventually shots were lined up all the way across the stage. Everyone in the band gets to have some fun with this one: from Marvin Dykhuis’ and Tony Redmans’ duelling lead guitars to Sarah Brown’s low-end bass solo.

The title song, “Kick Up Your Heels,” is a co-write with another of Shelley’s heroes, John Magnie of the Subdudes.  “John came up with the melody and turned it over to me to write the lyrics,” she says. “We were thinking about writing a song for Marcia (Ball), right after she recorded Tattoo Lady and the Alligator Man, feeling that Louisiana rhythm and how she kicks her heels when she plays piano. When I recorded it with my band, it was good, but it was missing something, so we got the Subdudes to add a little crazy.” Steve Amedée lays down a fun second line snare rhythm and the dudes add their rich harmonies and fun extras. Marcia Ball plays piano and John Magnie backs her on accordion, a first time musical collaboration for them.

One of Shelley’s inspirations has always been Aretha Franklin, and “Soulville” showcases that influence. “I first discovered Aretha Franklin’s version of this song and then later Dinah Washington’s version. Dinah was one of the songwriters, along with Henry Glover. I started doing a little research, and found that Henry was tight with Levon (Helm), and is even in one of the early photos of Levon building his barn in Woodstock.” Henry soon became another of Shelley’s songwriter favorites, (see “Blues So Bad,” a Helm/Glover co-write) and completes yet another circle of influence in her musical odyssey.  Ask Shelley to tell you about rehearsing in Levon’s barn on the anniversary of his death with her good friends, a good bottle of whiskey, and a ghost for good measure.

“Heart of a Girl” showcases Shelley’s songwriter and vocal talent, and a backstory of romantic magic. “I still believe magic can happen. The idea came to me as I watched my mom fall in love again. Here was a no-nonsense businesswoman who reunited with my real father at one of my shows. They had not seen one another for more than 30 years,” Shelley says. “And suddenly, she had that soft heart of a girl, that innocence that believes in hopefulness.  To see her like that was beautiful.”

Keeping the party going strong, Shelley brings “Crush” to the mix. “It’s a fun, groupie song. I won’t call any names out on this one. Someone close to me had a groupie crush on a bad boy musician, and I wrote that song for her just for fun.”  With lines like “If you got somebody, I’ll make you forget her,” and “Would you rock my world like you rock that mic?,” it’s definitely a celebration song that makes everyone want to grab a mic and sing along.”

A pivotal moment in her career was in 2008, when Shelley was named Texas State Musician by the Texas Legislature, and found her voice resonating with fans across the state – and the nation.

“‘How Eagles Fly’ is about hope and positivity: an anthem for America. There’s a whole lot of division out there,” Shelley continues, “but ultimately, we are all in this together. We have a lot more in common than that which separates us. Music brings us together, and everyone can agree with lyrics that speak to the common American dream.”

Kick Up Your Heels is a high-water mark for Shelley King. Through multiple incarnations of bands with friends and collaborators, and performing at hundreds of house concerts, honkytonks, theatres, festivals and solo shows, she has explored different avenues and attitudes, but she has hit her stride with this new project. She proves with this album, created with her musical friends and family, that music is much more than a career for her.  “It’s all about connections,” she says. And Kick Up Your Heels brings Shelley King’s band family together for a reunion that is one hell of a party.