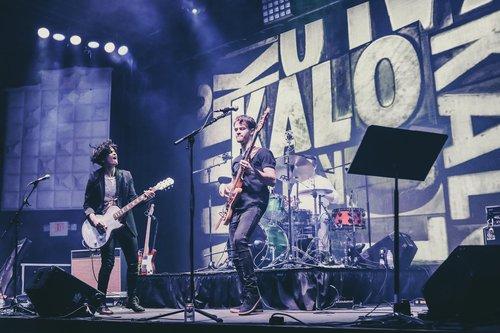 Israeli guitarist, singer and songwriter Bat-Or Kalo fronts her eponymous band and also travels and tours the U.S. and Israel solo (wearing only her last name and her vintage Gibson electric guitar). Fiery, unbridled and electrifying, KALO’s guitar chops and contralto voice are a force like none other.

KALO is a tour-de-force that is a staple act across the Midwest, packing venues in Oklahoma, Missouri, Texas, Arkansas and Kansas, with frequent tour stops in the Northeast and South. From NYC's famed Bitter End music club to Beale Street in Memphis, Austin's 6th Street, Tulsa and Oklahoma City, Knucklehead's Saloon in Kansas City and beyond, the dynamic act has played alongside the raucous rockers Andy Frasco & the U.N. but has deftly channeled their roots opening for famous blues guitarist John Mayall. They've also shared festival stages with acts like George Thoroughgood, Robert Randolph & The Family Band and many more.

KALO defies convention, channeling power trios like The Police, The Jimi Hendrix Experience, Rush or Cream. Much in the vein of Led Zeppelin, the band fuses blues-influenced songs with rock and roll anthems and electric shows.

Based in the Heartland as she zigzags the country, KALO’s roots run deep and trace back to her home an ocean away in Israel. A cassette tape of Jimi Hendrix’s “Are You Experienced” set KALO on a musical path when she was 16 years old. In 2009, that path stretched across the Atlantic when KALO left Israel to soak herself in American music, the sounds of Hendrix, Jim Morrison, John Lee Hooker, Nina Simone and Elvis calling.

After completing her classical and jazz guitar studies in Oklahoma, she briefly returned home to record her jazz-imbued “Flesh & Bones” in Tel-Aviv. Afterward, KALO moved to New York to hone her skills as a live performer, frequenting stages like The Bitter End, Arlene’s Grocery, Rockwood Music Hall and others.

In 2012, KALO left The Big Apple to strum her guitar and write in the heart of Dixie. Her sophomore album took root in the Mississippi Delta and other southern states, where the blues tinge of “Dear John” began to grow. Released in 2013, the album received much critical acclaim from media around the world, including a Roots Music Report top blues rock album of 2018.

“KALO HAS SHARED THE STAGE WITH ACTS RANGING FROM LOS ANGELES-BASED ROCKER ANDY FRASCO, THE GODFATHER OF BRITISH BLUES, JOHN MAYALL, GEORGE THOROUGHGOOD, AND MANY MORE.”