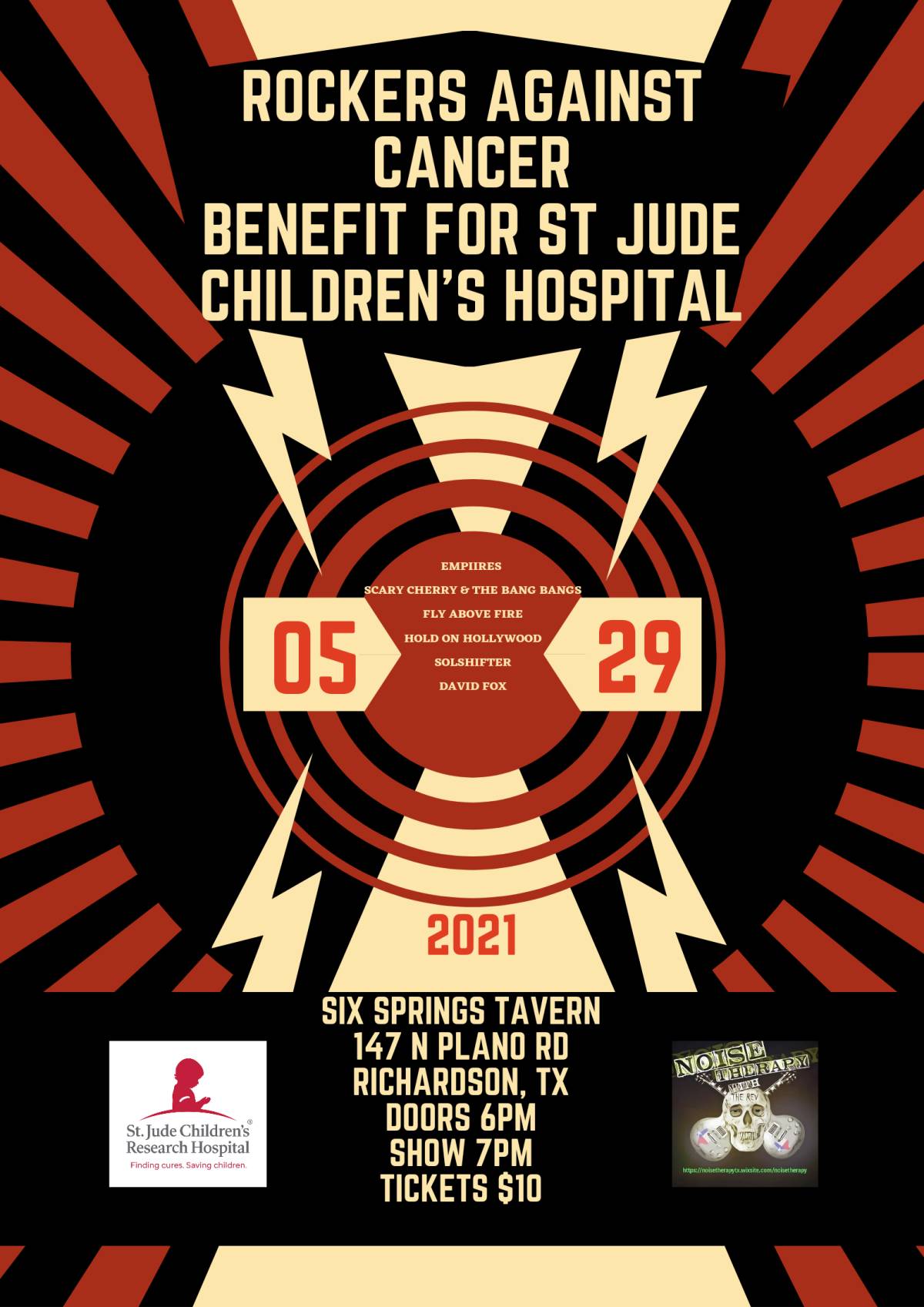 Born of fire, ruled by unyielding power.
Empiires is a new, hard rock band bringing their unique brand of fist-pumping rock to growing audiences across Texas.
High energy shows with soaring vocals and killer guitars backed by thundering rhythms, Empiires puts the excitement back in hard rock where it belongs, and they know how to entertain.
Their first single, Love or Hate, produced by Alex Gerst, blends combustible hard rock riffs with earworm choruses and begs the listener to join the Empiires.
Empiires:
Bishop Booker/vocals
D Paul/guitars
Matthew Gene/bass
Reid Stanford/drums
Scary Cherry and The Bang Bangs

How does one describe the three-headed monster that is Scary Cherry and the Bang Bangs? With sonic and artistic nods to 70’s glitter rock coupled with a snotty punk rawness, Scary Cherry’s debut LP GIRL is an assured, addled, four-on-the-floor joyride. Scary Cherry combines riot grrrl ethos with the pop smarts of The Runaways for a sound that salutes the past while paving its own hard rock path. From the spoken word album opener of Scary in the recording studio, GIRL is a raw, sometimes disturbing, but ultimately empowering journey through the eyes and life of a girl. The album is a glitter roller coaster, twisting and turning, coursing through a gamut of emotions with no exit until the last disturbing notes of a creepy piano and strings fade away.

While it may sound like the band hails from the gutters of NYC, Scary Cherry and the Bang Bangs actually come from the most unlikely of homes: Dallas, TX. Born out of roller derby in the Lone Star State, team captain and coach for the (then undefeated) Slaughterers, Scary Cherry was asked to write a theme song for the league. Scary recruited like-minded friends and an unstoppable machine was created. 6 years, a few hundred shows and one EP later (the bratty titled Limited Edition 5 Song EP), Scary Cherry and the Bang Bangs have garnered a loyal and ever growing fan base who refer to themselves and the band as Glitter Punks (a moniker the band wears with pride).
Whether they are opening up for Misfits, Megadeth, Slash or Lords of Acid, the band has no demographic boundaries. Having already had 4 original singles played in major market radio, and music featured in film, Scary Cherry and the Bang Bangs and their debutante GIRL are ready to come out in a big way.

So who exactly is this GIRL the album speaks of? “She is all of us!” explains Scary Cherry. “From the self-absorbed bitch in “Glitter” to the severely deranged in “Tracked Down” (a love letter from a female serial killer).
She is the GIRL that you have averted your gaze from (“Crazy Jane”) as well as the GIRL you cannot take your eyes off of (“Anita 69″).”GIRL is a simultaneously hyperkinetic, dangerous, sexy beast, and ultimately, the essence of Scary Cherry and the Bang Bangs.
GIRL is Beautiful. GIRL is Ugly. GIRL is Powerful. GIRL is NOW.

FLY ABOVE FIRE is a hard rock ensemble hailing from Dallas/Fort Worth, Texas. The band was born from the ashes of multiple well-known and established area bands. Founding members Kenny Poovey, Nathan Hines, and Jeff Barnett wanted to set out on a mission to shed light on a dark world, to bring together all walks of life to be united through the power of music, to bring a spark to where only ash once was.

From this vision, FLY ABOVE FIRE was born. Intimate music led by crushing guitar crunches beautifully blend with melodic vocal hooks to drive this powerhouse through a dynamic and thought-provoking reality that questions good and evil, the what-ifs and what-nots, the sinner and the saint, the same world we all live in where the only way to fight back is to FLY ABOVE FIRE.

Don't be held back or pulled down… Let the REVOLUTION begin!

HOLD ON HOLLYWOOD is a rock band based out of Houston, TX. Their sound combines powerful vocals, massive guitars, unforgettable melodies, relatable lyrics, and infectious pop hooks that will have you singing along before the first chorus ends. Since debuting in April 2015, HOLD ON HOLLYWOOD has built a dedicated fan base through their steady stream of live shows, and active social media presence. Notable acts that HOLD ON HOLLYWOOD has performed with include:

2018 saw HOLD ON HOLLYWOOD landing the opportunity of a lifetime, where they opened Bon Jovi's "This House Is Not For Sale" tour date (READ MORE) at Houston's Toyota Center (18,300 capacity), and led to HOLD ON HOLLYWOOD's debut single "The Chase" being picked up and put into regular rotation on Houston's biggest Rock/Alternative station 94.5 The Buzz. The song spent the second half of 2018 in the station's Top 40, often making it's way into the Top 20. "The Chase" finished out the year on The Buzz's "Top 94 Songs of 2018" list.

Things have been on a steady upward climb for HOLD ON HOLLYWOOD since then. The band released the music video for "Save Me", the title track off their debut EP in April of 2018, and toured the East Coast with The Bunny The Bear and It Lies Within in May. HOLD ON HOLLYWOOD performed at two of Houston's biggest annual festivals, the "94.5 The Buzz Bud Light Roast" in July and "Buzzfest" in October. "The Roast" took place at the Cynthia Woods Mitchell Pavilion (16,500 capacity), where they shared the stage with Blue October, Awolnation, Theory of a Deadman, and Robert DeLong. A new video for "The Chase" was filmed at that show and released on July 25, 2018. HOLD ON HOLLYWOOD returned to the Cynthia Woods Mitchell Pavilion for "Buzzfest" in October, where they performed with A Perfect Circle, Chevelle, Mike Shinoda of Linkin Park, The Dirty Heads, The Struts, Badflower, and more. Houston Press listed HOLD ON HOLLYWOOD's set as one of the festival's Top 5 performances of the day (READ MORE).

The band spent 2019 recording new music, headlining shows at all of the major venues in the Houston area, and touring regionally. 2019 included HOLD ON HOLLYWOOD's second performance with Blue October, where they headlined the second stage at Blue October's 1st Annual "Houston Music & Arts Festival" at White Oak Music Hall (4,500 capacity). The band also did a run of dates with Candlebox, and numerous one off shows with bands such as Puddle of Mudd, Buckcherry, Hinder, Blacktop Mojo, and more. HOLD ON HOLLYWOOD was named "Rock Artist of the Year" at the 2019 H-Town Awards, where they were also nominated for "Entertainer of the Year" and "Music Video of the Year". The band finished out 2019 with the release of the single "Take Me Home Tonight" (produced by Stephen Bogle), were nominated for six awards at the 2019 "Support Local Music Awards", and headlined a multi-stage event at Houston's Warehouse Live (1,800 capacity) to celebrate the band's 5th Anniversary.

David Fox~ A veteran of the Texas music scene, David Fox started performing in the Dallas area in 1977. Playing with many of Dallas’ best musicians, David has traveled across the United States. . He is accomplished in songwriting, recording and production.