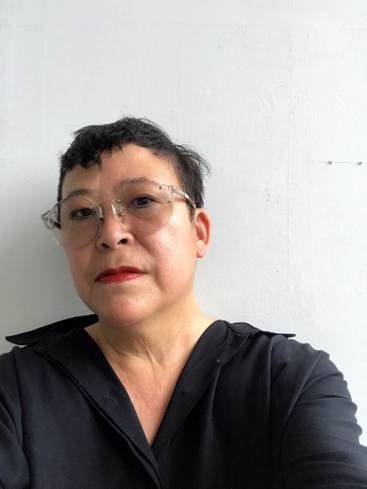 Beauty never did become the big issue that the critic Dave Hickey, a decade ago, so eloquently predicted it would. Yet the pursuit of beauty remains an urgent motivation for many artists -- Carrie Yamaoka, for one. The beauty in Ms. Yamaoka's medium-to-small-size paintings is of a purely sensual sort that calls to mind California Fetish Finish, but without the look of machine-made perfection. . . . In time-honored Modernist style (think Robert Ryman), Ms. Yamaoka also toys with the physical support, calling attention to the painting as a hand-made object. . . . It all adds up to a seductive marriage of voluptuous materialism and rigorous formalism. Ken Johnson, “ART IN REVIEW: Carrie Yamaoka,” New York Times, May 24, 2002

Carrie Yamaoka is a New York-based visual artist working in the expanded field of painting that traverses sculpture and photography. Of her approach, Yamaoka has explained, “I am interested in the topography of surfaces, the tactility of the barely visible and the chain of incidents that determine the outcome of the finished object. The viewer is placed at the intersection between the record of chemical action/reaction and the desire to apprehend a picture, one that may emerge in fleeting and unstable states of transformation.” For her Tuesday Evenings lecture, Yamaoka focuses on the development of her work, how the work circles back around to its own past iterations, and its current trajectory.

Yamaoka has shown widely in the US and Europe since the 1990s. Her work is included in the collections of the Albright-Knox Art Gallery, Buffalo; Centre Pompidou, Paris; and The Victoria & Albert Museum, London. Yamaoka received an Anonymous Was A Woman Award in 2017 and a John Simon Guggenheim Memorial Foundation Fellowship in 2019. Recent solo exhibitions include recto/verso at Henry Art Gallery, University of Washington, Seattle, and Panorama at Ulterior Gallery, New York. Her work was featured in arms ache avid aeon: Nancy Brooks Brody / Joy Episalla / Zoe Leonard / Carrie Yamaoka: fierce pussy amplified at Beeler Gallery, Columbus College of Art & Design, Ohio, and the ICA in Philadelphia (2018–2019). She is also a founding member of the queer art collective fierce pussy.