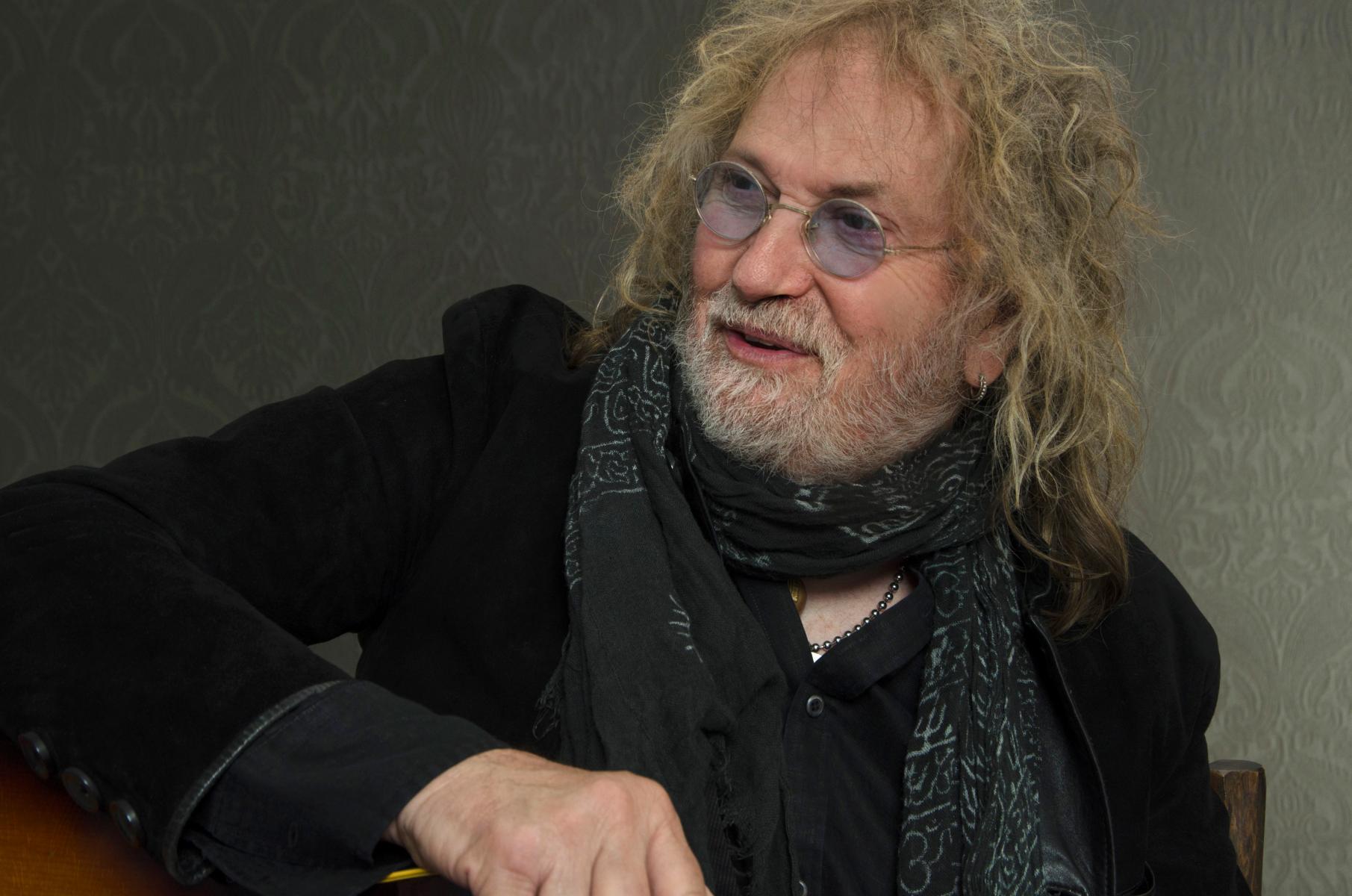 WIMBERLEY, Texas — Whether or not you subscribe to the adage that the devil always has the best music, you can take it on faith that anytime he pops up for a cameo in a Ray Wylie Hubbard song, the results are gonna be pretty damned entertaining. And as any fan of the Hubbard cannon knows, Old Scratch pops up in his songs a lot — nearly as often as all of Hubbard’s wise-cracking black birds, lyrical and musical nods to Lightnin’ Hopkins, bad-ass women (usually Hubbard’s own wife, Judy), and a myriad of other grifters, ruffians, and scrappy cats of the gnarly and general lowdown variety. Somewhere or other on just about every Ray Wylie Hubbard album, the devil always gets his due — and he’s now even worked his way up to top billing on the acclaimed songwriter’s latest, Tell the Devil I’m Getting There as Fast as I Can (due August 18, 2017 on Bordello Records through Thirty Tigers).

Now, don’t get the wrong idea here. Hubbard’s not some faddish heavy metal occultist on an Aleister Crowley kick; “I don’t really go that far or study it or anything,” he says with a chuckle. Nor is he under the spell of any liquid, powder, or other chemical that a tee-totaling churchgoer might flag as the devil’s influence: Hubbard shook off all of that stuff 30-some-odd years ago, when the wayward ’70s progressive country refugee stumbled out of his honky-tonk fog and discovered that both his life and art were a helluva lot greener on the sober side of the fence. What it really comes down to is the fact that there’s just something about the cut of the fallen angel’s jib that’s tickled Hubbard’s muse ever since 1999’s uproarious “Conversation With the Devil.” And much like his sheepish excuse in that song that “I never used the cocaine to get high, I just liked the way it smelled,” Hubbard just gets a kick out of hearing — or rather, making — the wily (Wylie?) fiend talk.

“You kind of give him a personality, you know?” offers the 70-year-old Oklahoma-born troubadour from his log-cabin Shangri-la in Wimberley, a Texas Hill Country hamlet just outside of Austin. “Like in [the new album’s] ‘Lucifer and the Fallen Angels,’ you pick up this guy hitchhiking to Mobile, Alabama, and he’s just this colorful kind of smart-ass, funky cat. It reminds me of A Streetcar Named Desire, where you’ve got Marlon Brando as this brute in a torn T-shirt, but what he’s saying is brilliant, because his words are from Tennessee Williams. I always enjoy that.”

And because he’s an equal opportunity kind of deity casting agent, Hubbard has just as much fun playing around with the voice of the devil’s arch nemesis, as heard here on the album-opening “God Looked Around.” The Biblical story of creation has been recounted many times over the ages, but only in Hubbard’s hands does it stomp like a prison field holler with the Almighty mumbling “Well shucks, let there be light” and “well there it is, for what it’s worth.” You better believe he sticks to the whole Original Sin and kicked-out-of-Eden plot, though, and not just to land his punch line about why all snakes “to this day they slither and hiss.”

Later, in the song “Prayer,” Hubbard sings about getting “perplexed and overwhelmed” anytime he attempts to “unravel the sacred,” but his big-picture focus and artistic sense of direction has never felt truer. Although Tell the Devil I’m Getting There as Fast as I Can isn’t a concept album, per se, its songs fit neatly together to chart a Dante-esque journey from Paradise Lost all the way to the final reckoning of “In Times of Cold.” “There’s a definite beginning, middle, and end to this record,” says Hubbard, who’s joined on that last song by the ever-exquisite Patty Griffin. “It starts with ‘Genesis,’ and at the ending, there I am trying to plead my case before the court of heaven, hoping I’ve got a good lawyer.”

That wry Ray Wylie wit, which filled every page of his compulsively readable and hair-raisingly candid 2015 memoir A Life … Well, Lived, can be found in spades here, too, along with heaps of the patented “grit ’n’ groove” that’s been a Hubbard hallmark and one of the most oft-imitated but never-equaled signature sounds in all Americana, going back to 2001’s Gurf Morlix-produced Eternal and Lowdown and especially since his vicious “Snake Farm” first reared its lethal head in 2006. Produced by Hubbard himself at The Zone in Dripping Springs, Texas, with his lead-guitar playing son Lucas and drummer Kyle Schneider joined by Jeff Plankenhorn (Dobro and mandolin), Bukka Allen (B3 organ), and both studio owner Mike Morgan and engineer Pat Manskee on bass, Tell the Devil is every bit as lean and mean as 2015’s The Ruffian’s Misfortune and 2012’s The Grifter’s Hymnal before it, rumbling from start to finish with bone-rattling blues and assertive, coolhanded conviction.

Hubbard growls with matter-of-fact authority on the Lightnin’ charged “Dead Thumb King,” “I am the dead thumb king, lest you doubt,” while “Open G” doubles as both a nifty four-minute master class in alternate tunings and a sly showcase for his slide guitar chops. “Old Wolf” finds him channeling the spirit of the incomparable Howlin’ Wolf (with son Lucas doing just as right by Hubert Sumlin), and with “Spider, Snake and Little Sun,” Hubbard pays long-overdue tribute to Minneapolis’ infamous “Spider” John Koerner, Dave “Snaker” Ray, and Tony “Little Sun” Glover — essentially the anti-Kingston Trio. “I never saw Koerner, Ray and Glover play live, but that Blues, Rags and Hollers album (1963) is still one of my favorite records,” enthuses Hubbard, who approvingly notes in the song, “It wasn’t no clean cut folk group … they looked like sinister, low-key criminals!”

But Tell the Devil does more than just stomp, slither, hiss and howl; it also heralds Hubbard’s return to the folk-poet mysticism that illuminated the first decade of his artistic rebirth back in the ’90s, when songs like “Last Train to Amsterdam,” “The Messenger,” and “Dust of the Chase” (recently featured on the soundtrack of 2016’s acclaimed Hell or High Water) proved the reformed Cowboy Twinkie had a lot more to offer the world — and his legacy as a serious songwriter — than just his seemingly immortal ’70s anthem “Up Against the Wall, Redneck Mother.” Of course, Hubbard’s Freewheelin’ Bob Dylan-planted folk roots go back a lot farther than even his progressive country days, and as he insists with a good-natured laugh, that guy “never really went away — he just kind of got sidetracked for awhile.” Regardless, the “Long Black Veil”-esque ghost story “House of the White Rose Bouquet” is unlike any song Hubbard’s shared on record in nearly two decades, while the surreally psychedelic “The Rebellious Sons” is, by his own admission, completely different from anything else he’s ever done, period.

“I’ve always had this idea that I needed to do something like ‘All Along the Watchtower,’” says Hubbard, who as a Jimi Hendrix and 13th Floor Elevators fan was most assuredly not one of those early Dylan disciples who bailed when the Bard went electric. “So I basically sat down with the intent to write this mythological, Holy Grail/Games of Thrones kind of thing, and then I had the guys from the Bright Light Social Hour come in, because I knew they’d be perfect for it.” The Austinbased psych-rock band had previously called Hubbard out of the blue back in 2015, inviting him to join them onstage for their own album-release blowout so they could jam together on his 2003 anthem “Screw You, We’re From Texas.” “That was trippy,” recalls a beaming Hubbard, who was so impressed with the band’s intensity that he ended up re-recording that song (along with a couple of gems from his back pages) for a retrospective album he aims to release later this year.

More recently, Hubbard was also invited to sing one of his songs at a sold-out arena show by mainstream country sensation Eric Church, who had name-dropped Hubbard in the title track to his 2015 smash album Mr. Misunderstood. To return the favor, Hubbard invited Church to sing with him on Tell the Devil I’m Getting There as Fast as I Can’s title track — right alongside none other than Americana queen Lucinda Williams. The unlikely trio came together piecemeal via bouncing tracks between different studios, but the end result, with all three voices coming together by the end of the song like a rock ’n’ roll benediction, is pure magic.

“I can’t remember if it was Gurf (Morlix) or George Reiff, but one of those guys told me once that on every record I need to have a rock ’n’ roll anthem, so I always try to do that,” says Hubbard, referring to two of the three record producers (the third being Lloyd Maines) that he remains forever indebted to for helping him rebuild his career, one album at a time, ever since going sober three decades back. “So, ’Tell the Devil’ is kind of my rock ’n’ roll anthem here. It’s got an old gnarly guitar and slide on it, but I really love that it’s also got that ‘Maggie May’ instrumentation thing going on, with mandolin and Hammond B3 together; in fact, Bukka came in and did an Ian McLagan thing on it that was just great. And then of course we got Eric singing his part, and finally Lucinda put her Lucinda low-down cool on it!”

All that’s missing, it seems, is the devil himself; unlike his starring role in the earlier “Lucifer and the Fallen Angels,” he’s really only mentioned here in passing. That’s because this song’s about a very different kind of funky old cat.

“It’s one of those Bob Seger ‘Turn the Page’ type road songs,” explains Hubbard. “But it’s kind of a love song in a way, too. It’s about this old guy who lives and dies rock ’n’ roll — that whole deal where you’re in it and you ain’t ever gonna get out of it — and it’s about the woman he loves who can out-cuss any man.” He pauses a beat before stating the obvious with a chuckle: “So yeah, it’s pretty much all based on truth.”