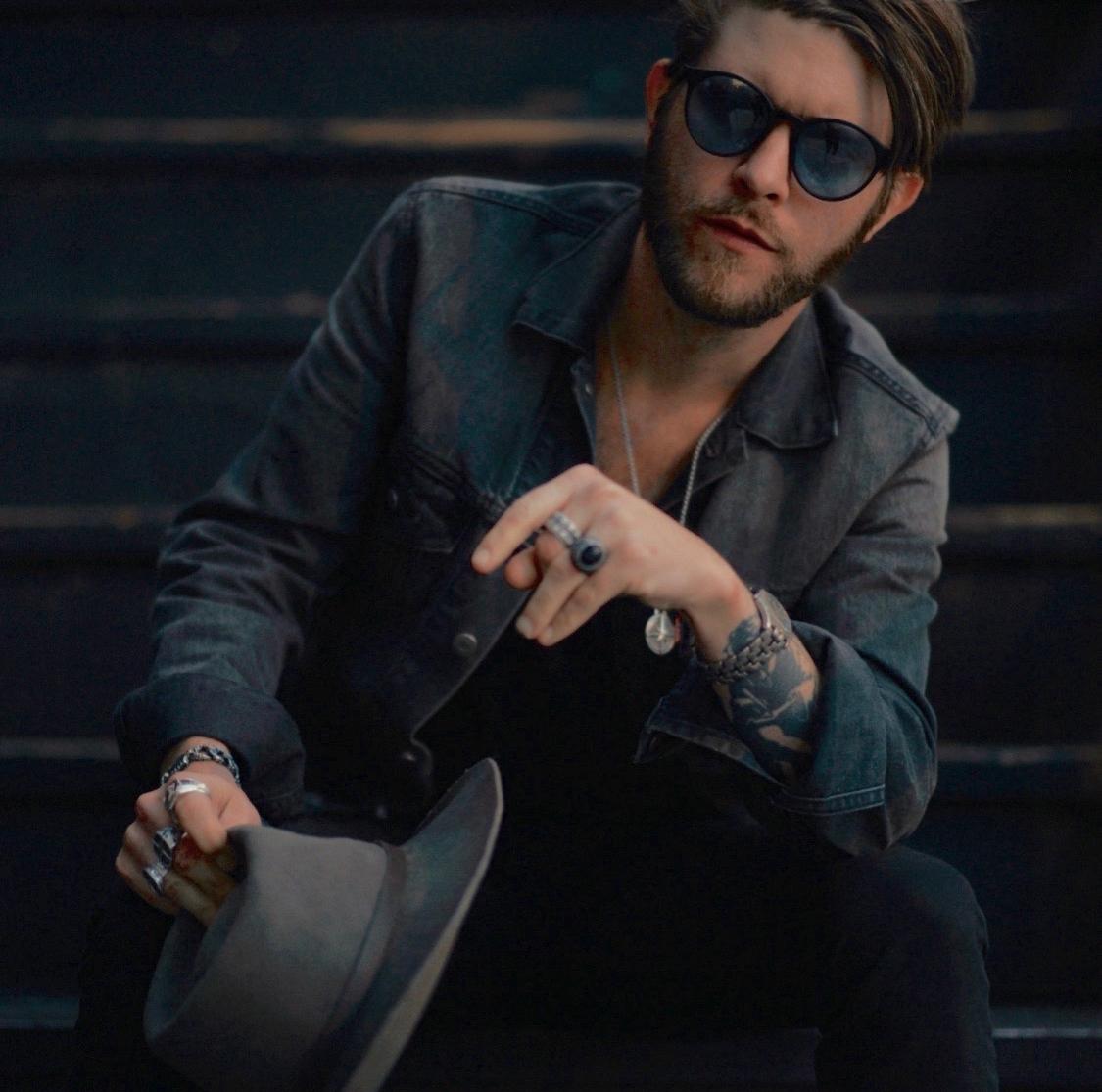 From haunting acoustic ballads to gritty rock and roll songs filled with swagger and attitude, Matthew Mayfield has spent the past decade releasing music that has changed the hearts and lives of his listeners. His latest LP, Gun Shy , is a collection of songs as varied as the emotions each of us feels.
If his previous release, RECOIL , was the fruit of an intense effort by Mayfield to depict the good, the bad, and the ugly in the world he inhabited, Gun Shy is a look into all worlds – those full of darkness and hope.
To connect with listeners and draw them into these worlds, Matthew created Inside the Song with Matthew Mayfield , a podcast dedicated to telling the stories behind the songs of Gun Shy - Mayfield’s most introspective and personal record to date. “Our Winds” speaks of true love and hope in the midst of pressure from external forces while “Broken Clocks” finds him accepting a relationship that is doomed to fall apart. The riffs and hooks found in “Gun Shy” and “Best of Me” show Mayfield as the rock and roller he is. While Mayfield is known for crafting both gripping ballads and eclectic rock songs, Gun Shy ’s greatest triumph lies somewhere in between. “S.H.A.M.E.,” the album’s third track, touches on what is currently Mayfield’s deepest concern – a world full of people that feel as if they are alone. “Shame is something that no one wants to talk about, but we’re all ashamed of something. We all have demons and things that prevent us from seeing our self-worth. The song is about connecting with people and letting them know they are not alone,” says Mayfield. “Connection is everything, and music has a unique way of helping people connect to others and to parts of themselves that they might otherwise be unable to access.” Gun Shy is now available on all digital platforms worldwide. Physical copies are available on matthewmayfield.com.

REMEMBER WHEN MUSIC GAVE YOU CHILLS?

It’s a cool, cloudy morning in February of 2020; musician Natalie Price’s latest arrangement-- a whimsical love story titled “​The Island​” -- has just gone live on NPR’s music blog. In the video, shot within her north Austin home, the Dallas-born songstress weaves this sprawling audial daydream on nothing more than her trusty Kalimba (a miniature, plucked piano she’s outfitted with a guitar pickup). ​You’re my sunshine, my refuge, my peace in the storm,” ​she sings, her voice weaving around the sparse melody like a vine, ​“You’re the reason I’m seein’ stars I’ve never seen before...”

Maybe it’s the nostalgic innocence of the love story she’s singing, or the subtle heartbreak anchoring her soulful crooning; but as she rounds back to her final chorus, one thing is clear:

Described by Trey Gutierrez (Texas Music Magazine) as “one of Austin's most dynamic new singer-songwriters,” this artist’s ethereal, one-of-a-kind sound refuses to fall neatly into one category. Just as comfortable dabbling in Americana or folk as she is indie-pop, Natalie Price’s music is perhaps best encapsulated by its deep-seated humanity. ``Each of her songs takes you on this journey,” says No​ë​lle Hampton, Price’s backup vocalist and singer/guitarist for Austin rock outfit, The Belle Sounds, “they capture not one emotion, but many -- [reflecting] what the listener needs to feel.”

Unsurprising for an artist of her caliber, Price recognized songwriting as her ​raison d’etre​ from a young age, even after her parents forbade her from chasing a musical dream.“I just couldn’t turn off the melodies in my head” says Price, “ When they told me to ‘say goodbye to that dream,’ I really did try - I ran into another room and sobbed my eyes out and journaled. That turned into me writing a song because it was instinctually the​ only way I knew how to express those feelings​.”

Raised in a strict, religious, less-than-musical household, Price’s songwriting experience was largely self-taught out of necessity, resulting in the undiluted, pure love of the craft that’s baked into every melody she writes. The harmonies her grandmother sang in church, the catharsis she’d find scribbling lyrics in her primary school journal, the awe-inspiring power of compositions like “Amazing Grace” -- these formative memories continue to guide Price long after she’s taken ownership of her own life story. “She's following her own songwriting compass'' says Austin based folk-singer Grace Pettis, “[she’s] not influenced by what anybody else is doing, or some self-conscious idea of what she’s ‘supposed to do’ -- those kinds of elements are exciting to hear.”

Price’s journey thus far can be experienced via her debut EP, ​Through the Fog​ (2019). Written between 2012 and 2018, this five-song, ‘best-of’ collection presents a snapshot of Price’s move to Austin and the nights she spent honing her craft at local open mics and listing rooms. A remarkable mosaic of love, regret, and hope, Through the Fog’s l​ ush compositions and masterful producing (courtesy of engineer Brian Douglas Phillips) demand to be experienced in one sitting, with the best pair of headphones one has available. “It’s the kind of EP that gets into your blood.” says Hampton, “Natalie’s poetry, her prose, everything just comes together so perfectly".

Today, Natalie Price’s journey continues. ​Follow her on ​Instagram​ and ​Facebook​ for her latest updates and releases, and access her archive of performances and recordings via her ​YouTube channel​.​ As Natalie works toward her eagerly awaited sophomore release, why not revisit ​Through the Fog ​or ​-- ​better yet -- ​experience this landmark debut the first time​? As the record’s pedal steel mixes with her warm vocals and knock-out melodies -- one can’t keep from falling in love with Natalie Price’s music again and again.

“There’s always struggle, and there’s always hope. I feel comfortable with both of those forces in my life at all times,” Keeton Coffman says. “When you remove one of them, it feels weird.”

Coffman is pacing on his front porch, taking a moment to explain the tension not just that he’s found, but that he needs. “I love these new songs because you can hear the hope in them, but you can feel the weight of the circumstances, too,” he says. “If you just get dark for the sake of dark, you forget you still have a pulse, and hey, your heart is still pumping for a reason.”

“Wounded little heart at the radio dial, waiting for a lyric and a song to smile on you… wasted what you couldn’t on a fool that you know ain’t worth a damn… you were in on a hope, yeah you… kept waiting for him to give you anything but a broken heart.”

The new songs Coffman is referencing make up his latest album, Hard Times, a 10-track feat of triumphant, ragtop-down rock-and-roll. Anchored in Coffman’s natural storytelling and earthy voice, Hard Times is both a reintroduction and a return for an artist who’s pushed through starts and stops, but who’s never been anything but exactly who he is. “I’ve never needed someone’s permission to write,” Coffman says. “I’ve always just thought it’s what I should do.”

Growing up in Bryan-College Station, Texas, Coffman found an old Alvarez guitar in his mother’s closet behind stacks of Motown, 70s songwriters, and Tina Turner records. “My mom showed me three or four chords after I confronted her with the guitar, like, ‘Why has this been hidden in our house?’” Coffman says with a smile. An elite gymnast en route to becoming a national champion, he carried the guitar with him on long bus rides to competitions, and then west to college at the University of Texas at Austin. When an injury finally ended his athletic career at 20, Coffman immersed himself wholly in music.

“I’ve been hiding something up my sleeve. I’m getting pretty good now, at making you believe…”

After graduation, Coffman packed up and moved to Houston, where he first built a following with his band, The 71s. The quartet decided to part ways in 2012, and solo projects including 2016’s Killer Eyes followed, always gaining traction thanks to Coffman’s Springsteen-esque grasp on the beauty only found in grit. Houston Press, Space City Rock, and other outlets noticed. But as projects opened doors, Coffman had to step back, moved by forces out of his control. Diagnosed with Bipolar II and Obsessive-compulsive disorder while still in high school, the diseases reared up and set him down. “You don’t know why Bipolar pops up when out does––it just comes out of nowhere, and boom,” Coffman says. “A few years ago, when things got very difficult, I decided, well, I’m not going to stop writing even though I’m not sure if these songs are any good - my analytical skills aren’t what they should be. When I got back to myself, I had these 10 songs.”

“She was a lifeguard at the local waterpark swimming pool. Sold cigarettes to the rich girls after school. Ocean blue eyes straight off the coast of Maine, and a smile to steal your heart, curves like a work of art, gliding down the boulevard… hey boys, here comes my little hurricane.”

Hard Times comprises those songs––and Coffman’s willingness to trust the process. “When I just let the notes float around as they want to, I am symptom-free in the midst of all that,” he says. “On the hard days, the more music I play, the less my mind hurts.” Tracks including “The Magician” and “Night” tackle deception carried out by different actors to different ends, while songs such as “In the End,” “River Town,” and “Wounded Heart” explore faith, consistency, and love. Vivid details form multi-dimensional character sketches moving through recognizable Texas skylines, and the guitar-wrapped stories and confessions become our own.

“I hope people find themselves in the characters,” Coffman says. “This is a record I wrote from my experiences, but these aren’t stories about me. I hope these characters share your story, your thoughts, your pain. We can share the same hope––that’s what music does for me.”

“Keeton Coffman whips up a classic Americana dish with ‘Wounded Heart’. The Americana artist with a high-energy heartbreaking single…with an addictive drumbeat, guitars, and Coffman’s vocals saturated with emotion. Everything is flawless – every note is perfect, every line delivered with emotional weight, and the tone of the track is somehow bittersweet and upbeat all at once. ”

“Keeton Coffman certainly has a way with a song and his knack for soulful indie rock makes him a diamond in the DIY world of reckless recordings. Coffman shines with a tender delivery and a big powerful song structure that is an unscripted blender of John Mayer, Nick Lowe and Matthew Sweet.”