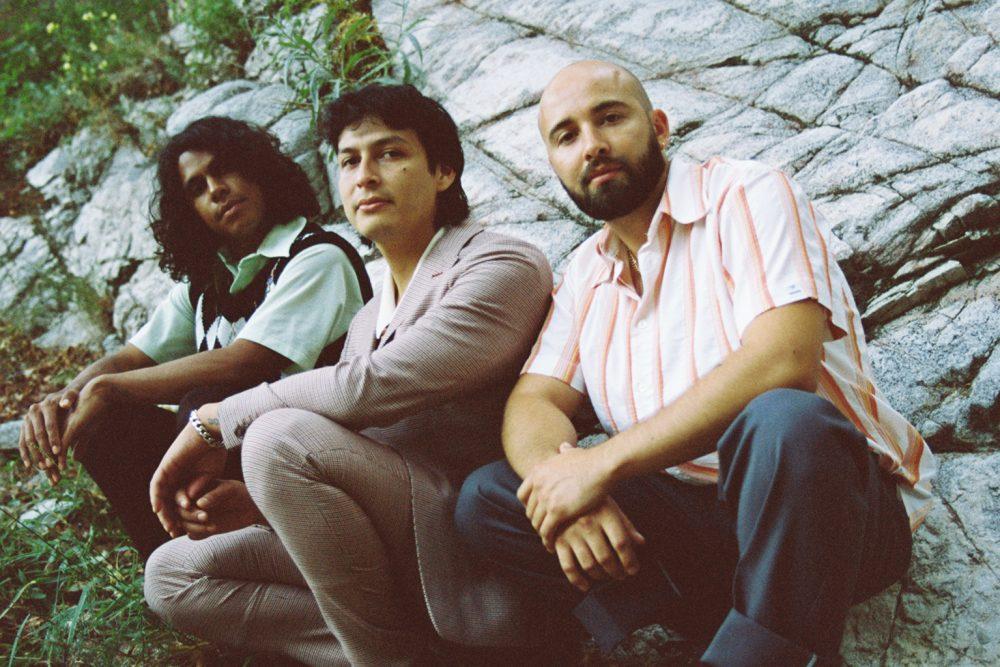 This September 30th marks the 15th anniversary of the first rehearsal of what we now know as LA-based band Inner Wave. Its founding trio set off as middle schoolers with a certain kind of gusto, and they’ve never forgotten it. Now in their 20s, Inner Wave is readying the release of a fourth LP, Apoptosis, and its members feel more musically connected and confident than ever before.

Without downplaying the difficulties—because of course, through such a long journey there’s been plenty of them—it is because of a single, steadfast credo that Inner Wave has endured, and it’s why the group continues to grow. They care immensely about the craft of music-making.

Over the past few years, however, that guiding premise was inadvertently compromised. Things were moving quickly; they’d toured particularly relentlessly and released heaps of singles since the popularity of 2017’s Underwater Pipe Dreams. But when the pandemic hit last year, of course, a slow-down was unavoidable.

“We were in a position where we felt we were at a high, and then sunk to a really dark low, not knowing what’s going to happen—not just with us, but with the world,” Sotelo recalls.

Even without the unprecedented stress of surviving a global pandemic, Inner Wave was already off-course, scattered. The mandated hiatus and the reasons for it were frightening. But if they were to continue, Inner Wave would absolutely have to regroup and refocus.

Pablo Sotelo, Elijah Trujillo (guitar), and Jean Pierre Narvaez (bass, vox) are the founding members, but Inner Wave is actually a quintet, and now in its tightest formation yet. Drummer Luis Portillo, who’s been with the band since 2017, is obsessed with his craft. Sound engineer Jose Cruz was incorporated late in 2020 as keyboardist, and his tenacity (and genius, all agree) is unparalleled.

Cruz fit right in, Trujillo notes: “He understands the type of level of musicianship that we have, and puts in the effort to take it to that next level, to go home with a notebook full of chords that he figures out and brings back the next day—without us even having to ask him.”

Discipline—specifically, a commitment to lifelong learning of music-making—is a massive force in Inner Wave’s flow. As kids, Sotelo, Trujillo, and Narvaez drilled and drilled, practicing for hours after school every day. This dedication remains foundational; a certain intensity of effort is essential to Inner Wave.

“Coming out of this pandemic,” Sotelo says, “having gone through so much and restructuring our team, we reverted back to being very hands-on—like we were for 11 years. Now I feel very confident: we’re like a musical tank.”

The newly unified five-piece spent two weeks quarantined at True Sound, a recording studio where Cruz also lives. Surprisingly, this was their first-ever experience recording a full-length in a studio.

Out on September 30th, Apoptosis is a trip into the band’s familiar realm of electronic, soul, and garage-rock. This time, however, the details are especially intricate, with unexpected synth accents that somehow both meld and stand out; they feel necessary, like the crevices and sharp edges of a mountain. Through these well-resolved musical moods, the intentionally ambiguous lyrics are strongly conveyed, yet left up to the listener for pondering. Apoptosis is experimental yet intentional. It is far-fetched in theory, but not out of reach in its final presentation.

“Apoptosis is a biological term for the death of cells, which occurs as a normal and controlled part of an organism’s growth or development. Basically, it’s when your body lets certain cells die so that new healthy cells can grow,” Sotelo explains. “It was indicative of what we had just gone through this whole year, with losing a member, losing management, losing a tour, shows, losing friends, losing almost everything. And then starting from the ground up.”

Today, Inner Wave is a result of all those tribulations as much as it is all the toiling toward progress done despite them.

“We finally got to have that experience where we’re all in the room writing a song and we all just kind of know what we want; it’s so exciting,” Narvaez says. “During these times we learned to adapt and grow as individuals, and more importantly, as a unit. I feel like Apoptosis is one of our best musical works so far because of these moments. Every hardship evolves into something beautiful.”

Inner Wave has partnered with PLUS1 so that $1 from each ticket will go towards supporting Our Music My Body, a collaborative campaign founded by Between Friends and Resilience to raise awareness about sexual harassment in the music scene.
Event by
Resound Presents
Calendar
Website
Facebook
Twitter
Instagram