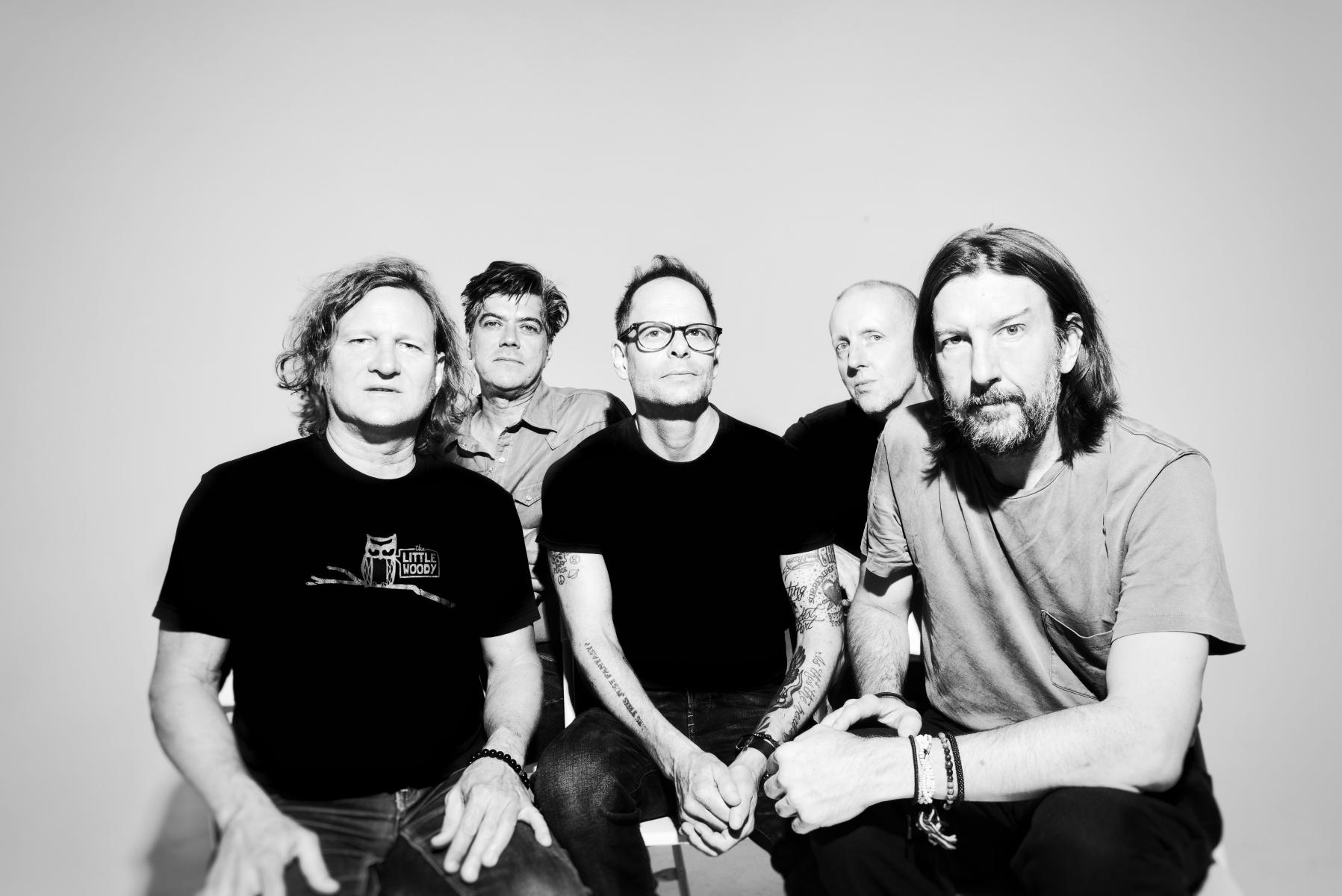 Gin Blossoms' blockbuster 1992 album New Miserable Experience spawned four Top 40 hit singles, and established the Arizona quintet as one of the top rock groups of that decade. More than 25 years have passed since the release of New Mis, and now Gin Blossoms are back with their best set of songs in years. Produced by Don Dixon and engineered by Mitch Easter, Mixed Reality (set for release June 15) demonstrates that the timeless appeal of Gin Blossoms' music has endured.

Gin Blossoms formed in 1987 in the Arizona city of Tempe; guitarists Jesse Valenzuela and bassist Bill Leen were founding members. After some lineup changes, the group coalesced around Valenzuela, Leen, Robin Wilson (vocals and guitar), drummer Phillip Rhoades, and guitarist Doug Hopkins. One quality that set Gin Blossoms apart from other groups was its deep bench: four of its five members wrote songs. And while each musician would bring his unique songwriting sensibility to the group, somehow the tunes all came together, creating a whole far greater than the sum of its parts.

In 1989 Gin Blossoms released its debut album, Dusted, on a small Tucson-based independent label. The album included two Doug Hopkins-penned songs, “Found Out About You” and “Hey Jealousy.” The band gigged regionally in support of the album; live shows of that era showcased the young group's versatility and strength in songwriting, musicianship and vocals. Gin Blossoms' appearance at SXSW brought the band to the attention of major labels who began courting the band for a record deal.

Along with its original songs, the band became known for its high-energy, loose and informal shows full of lively stage banter; a typical set list of that era might include irreverent, left-field cover versions of “If I Only Had a Brain” from The Wizard of Oz, the Beatles' “A Hard Day's Night” and Loudon Wainwright III's “Dead Skunk in the Middle of the Road.”

In 1990 the group signed a contract with A&M Records. Before recording a full-length, the band cut a five-song EP for the label; Up and Crumbling featured songs that had been in the group's set for some time, and included Robin Wilson's “Allison Road.”

Ten months later, Gin Blossoms' major-label debut album, New Miserable Experience was released. The album included a dozen songs written variously by Hopkins, Valenzuela and Wilson. Working with producer John Hampton, the band recorded six new songs plus new versions of six tunes that had appeared on Dusted and the EP; the result may have been new to listeners across the country and beyond, but for local fans NME was almost a greatest-hits collection.

Despite the strong material on the album, initial response was muted, and for awhile it looked as if New Miserable Experience would be a commercial flop. But nearly a year after the album's release, the third single from the set – a new recording of “Hey Jealousy” – started receiving airplay. The single took off, rekindling interest in the album. Eventually a total of six singles from the record would be released, and NME would go on to earn 4x Platinum status (more than 4 million units sold).

By the time of New Miserable Experience's commercial breakthrough, original guitarist Doug Hopkins was gone from the group; his problems with alcohol had become so serious that the band had little choice but to dismiss him. Guitarist Scotty Johnson would replace him. “We were terrified,” recalls Wilson. “Could we do it without Doug? Were we going to get dropped by the label?”

Having four songwriters – Johnson wrote as well – would be part of what kept Gin Blossoms afloat in the wake of losing a key founding member. While three and half years would pass before a follow-up to NME appeared, Congratulations I'm Sorry showed that Gin Blossoms had lost none of its collective ability to turn out finely-wrought, catchy and lyrically compelling songs.

But initially, the execs at A&M didn't hear a hit. “They came back and said, 'No, you need another single. You need another hit song on this record,'” Wilson says. The five band members put their heads together and delivered “Follow You Down.”

Congratulations would go Platinum, reaching #10 on the U.S. album charts (a higher spot, in fact, than the slow-burning New Miserable Experience had achieved). “Follow You Down” made the Top 10, and “Till I Hear it From You,” a Valenzuela/Wilson/Marshall Crenshaw co-write appended to subsequent pressings of the album, was a hit as well. A third single from the album, “As Long as it Matters,” earned a Grammy nomination.

Weary from nearly nonstop touring. Gin Blossoms would go on extended hiatus beginning in 1997. “We weren't all getting along at the time,” Wilson admits. He, Valenzuela, Johnson, Leen and Rhodes would each pursue outside projects. By 2001 the group had reunited; the older and wiser Gin Blossoms released Major Lodge Victory in 2006, and No Chocolate Cake landed on shelves in 2010. “We came back together,” Wilson says, “and became stronger than ever.”

By 2012, the band's lineup included drummer Scott Hessell. In 2017, Gin Blossoms decided to take a look back, celebrating the 25-year anniversary of the landmark New Miserable Experience. Time has been very kind to the band's back catalog; unlike many other records of its era, NME managed the unique feat of capturing the zeitgeist of the early 1990s while remaining timeless. The songs from the breakthrough album have not dated in the quarter-century since the world first heard them. Audiences packed venues on the NME anniversary tour, often remarking that the show – a start-to-finish runthrough of the classic album, followed by other songs and a new tune or two – felt and sounded like a greatest-hits collection. Which, in a sense, was completely accurate.

Also in 2017, Gin Blossoms were inducted into the Arizona Music & Entertainment Hall of Fame. That honor is another sign that the group's music has earned classic status. “We're descendants of the Byrds, the Rolling Stones, Tom Petty and Cheap Trick,” says Wilson. “All of that is classic rock, and that’s who we are, too.”

Meanwhile, Gin Blossoms began work on their first new album in almost eight years. Longtime producer and friend of the band John Hampton had passed away in 2014, so at first the group considered self-producing. But at one of their shows, they met Don Dixon, producer of the Smithereens' first two albums and a legend in power pop circles.

The group booked time in Mitch Easter's Fidelitorium Studio in Kernersville, N.C., working with Dixon as well as Easter, veteran of R.E.M. sessions. Now Gin Blossoms had a producer and engineer who helped define '80s jangling power pop, a style that exerted a major influence on the band's own musical approach. “We needed to be shaken and taken out of our element,” Wilson explains. “Working with Don and Mitch gave us the inspiration to reconnect with the very foundations of the band: where we came from as songwriters and band mates.”

Mixed Reality shares the same timeless feel as New Miserable Experience; it's packed with 15 songs, with Wilson, Leen, Johnson and Valenzuela all contributing material. And once again, the mix of songwriters results in something that has that unmistakable Gin Blossoms sound. “As much as we are children of our influences,” explains Wilson, “we managed to do something that was both familiar and original.”

Wilson says that he was able to “tap into a younger version” of himself when writing songs. One of his four new tunes, “Break,” opens Mixed Reality, and it's as strong as anything the band has ever done. Bassist Leen and guitarist Johnson have two co-writes including the memorable and driving “Still Some Room in Heaven.” The prolific Jesse Valenzuela contributes four songs as well; among the highlights is the chiming and melancholy “Angels Fly.” And the band's off-kilter sense of humor shines through in the brief audio-verité snippet, “The JFK Shit Show.” Gin Blossoms' undeniable power pop pedigree is on brilliant display with Wilson's “The Devil's Daughter.”

“We’re at the point now where we play better, we communicate better, we get along more,” says Wilson. “We’re more grateful. It’s a very full-circle thing for us to be releasing Mixed Reality.” Built around the proven strategy of using the band's deep songwriting bench, and packed with memorable songs that connect with listeners while transcending a specific time period, Mixed Reality may turn out to be as timeless as Gin Blossoms' major label debut.