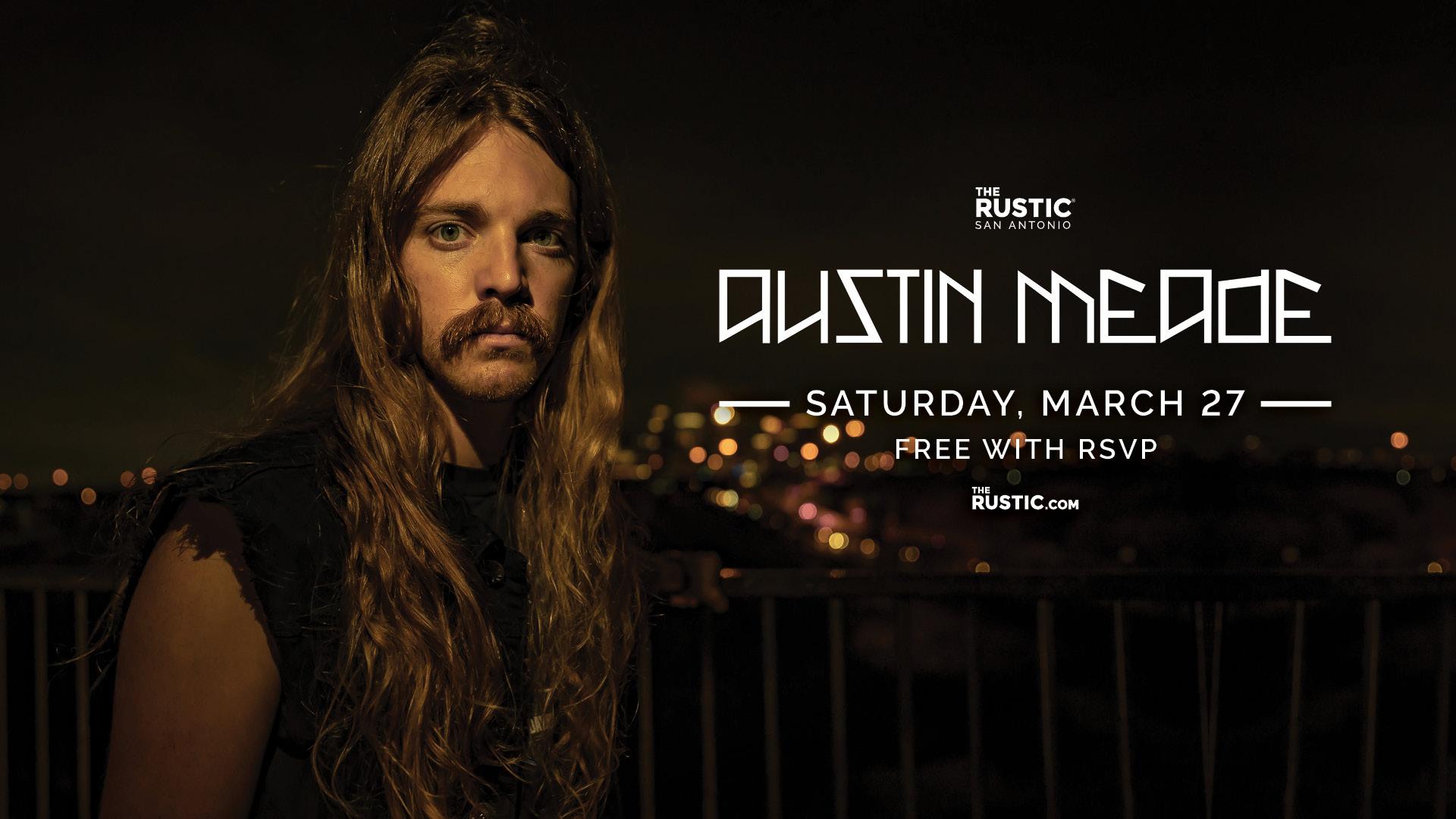 Join us for an evening with Austin Meade!

**This event is free with RSVP. Please note that a ticket does not guarantee entry or admittance. Seating will be subject to availability, on a first come first served basis. Per CDC guidelines, there is no standing room permitted. The Rustic is abiding by all CDC and city ordinances and we appreciate your cooperation as the safety of our guests and team members are our highest priority!**

On Black Sheep, Austin Meade delivers songs and stories that, like the young singer/guitarist himself, are contradictory yet cohesive. His influences—musical and otherwise—are as varied and rich as the small-town Texas soil that nurtured his talent, yielding 12 stellar songs ranging from the insinuating multi-layered musicality and storytelling of “Déjà Vu” to the dark alt-pop of “Happier Alone,” and on further to the new-age, Sabbath-inspired “Dopamine Drop.”
Thanks to his metal- and classic-rock loving dad, Meade got to see bands like Judas Priest and worshipped Whitesnake. In junior high he related to the intense emo-rock of Paramore and Fall Out Boy, and the power of songwriters like John Mayer. Yet, thanks to plainspoken but deep heartland songwriters like Tom Petty, and cutting his teeth touring in the Texas and Oklahoma Red Dirt scene, Meade’s music overflows with wide-open soulfulness. He was a drummer for years, even teaching to pay the bills, but Meade found his true voice when he began playing guitar as a teen in his pastor-father’s church. Those experiences lend both a gravitas and rebelliousness to Meade’s songs and self.
The songs on Black Sheep, produced by Taylor Kimball (Koe Wetzel, Read Southall, Kody West) are instantly memorable, but far from simplistic. Meade challenges the status quo, both musically and lyrically. “I like to question those standard math formulas,” he explains. “What if we just add two more lines and make somebody feel uncomfortable here,’ because the song itself is about being uncomfortable?” And within a song—and video—like “Déjà Vu,” Meade explores the cyclical, Groundhog Day-like nature of a month—or lifetime—of Sundays.
Throughout school, “I was one of the weird kids who actually liked writing class. I would describe ridiculous stuff, and in elementary school I was a Harry Potter nerd. I’d get lost in those books,” he remembers. Soon, though, records became his new sanctuary. “I started to hear songwriters that were telling stories in three to five minutes; concepts and ideas that were not only spanning just that one song. One of my favorite lyricists is Alex Turner of Arctic Monkeys; the way he describes things, you can almost touch it or smell it.”
Likewise, on Black Sheep, Meade’s vivid descriptions are palpable and immersive. They paint a picture the listener can step into, like taking a journey through “two-lane highways and speed-trap towns” that Meade traverses in “Déjà Vu.” “That’s my goal,” he explains. “To make people feel like they're in the room with the stories in my songs; they're within that experience.”
Meade’s carefully crafted songs manage to be profound and provocative, sonically suited for both dive bars and arenas. From the seismic guitars and painfully honest lyrics of a song like “Dopamine Drop” to the mournful, lilting nostalgia and hard reality of “Settle Down” and on through the fantasy of “handwritten letters, candle-wax seal, Midwest American feel” in “Cave In,” it is clear Meade’s ambitions and dreams are weighty.
The songs are ably aided on Black Sheep by his band, longtime guitarist and creative partner David Willie and drummer Aaron Hernandez; newest member bassist Jordan Pena isn’t on Black Sheep. In recording the LP with producer Kimball, Austin committed to exploring and experimenting with new ideas. “I wanted to put more pedals and crazier sounds on Black Sheep... I want to be constantly changing and morphing as an artist,” Meade says, “making sure that I'm opening myself up to new opportunities and new tones.”
The closing song that gives the album its title is self-referential and accepting. “‘Black Sheep’ is me realizing that, ‘fuck it, I don't have to change what I'm doing, I don't need to feel like I have to fit in.’ Just because I'm playing in Texas and Oklahoma doesn’t mean I have to play more country, or only an acoustic guitar. I own who and what I am.”
Further expounding on the record Meade notes, “I like to break people's hearts at the last minute, sometimes unsuspectingly: ‘Comfort is a hard drug.’” While not immune to the appeal of a white-picket-fence future, he wants more… for himself, and others. “I want people to look at lyrics like that and figure out if it challenges them to move or challenges them to make themselves a better person. To do what they want to do with their life and achieve their dreams, rather than just letting everybody else tell them what life is ‘supposed to be.’”
To that end, he’s been following his muse and paying dues for most of his young years. Playing every dimly lit restaurant stage that would help pay bills in college. (At Texas A&M he studied for agricultural economics, which he terms “a business degree, just a little bit more Texan.”) Meade’s also spent the last six years honing his songwriting skills on two indie EPs and two albums prior to making Black Sheep. And his talent has not gone unnoticed, the Dallas Observer writing that Meade’s “rich guitar-driven melodies and tone call back to times when Tom Petty and Jimmy Page ruled the stage. … His songwriting prowess is beyond his 26 years, with lyrics and characters acting as conduits into the mind of a young man trying to sort out his feelings as the state of the world smacks him in the face.”
Black Sheep was written and recorded in late 2019, and meant to be released independently--until Snakefarm got a hold of it and immediately signed Meade. The frontman is well aware that the hard work that’s led to this point is just the beginning. After all, he lays it out in “Black Sheep”: “Comfort is a hard drug … do you ever want to leave this town?” For Meade, placid hometown comfort is in the rear-view—or will be once touring starts up again, as he boldly sings his statement of intent: “I am the black sheep / running til I’m six feet.”

TIPS for the event:
-- COME HUNGRY: We’ll have our full menu available all day!
-- ARRIVE EARLY: Please note for all RSVP’s: all seating is first come, first served and based on availability.
-- BRING CASH: we do accept credit cards at our main bars, but most pop up bars & beer tubs in Pat's Backyard are cash only.
-- RAIN OR SHINE
-- TICKETING QUESTIONS? Contact Prekindle Online Ticketing at www.prekindle.com.
-- PARKING: There is limited parking at The Rustic.
-- RIDE SHARING is strongly suggested. Don't drink and drive
-- YOUR SAFETY IS OUR TOP PRIORITY: The Rustic is operating at limited occupancy and adhering to all CDC and Bexar County guidelines and regulations to ensure your safety.