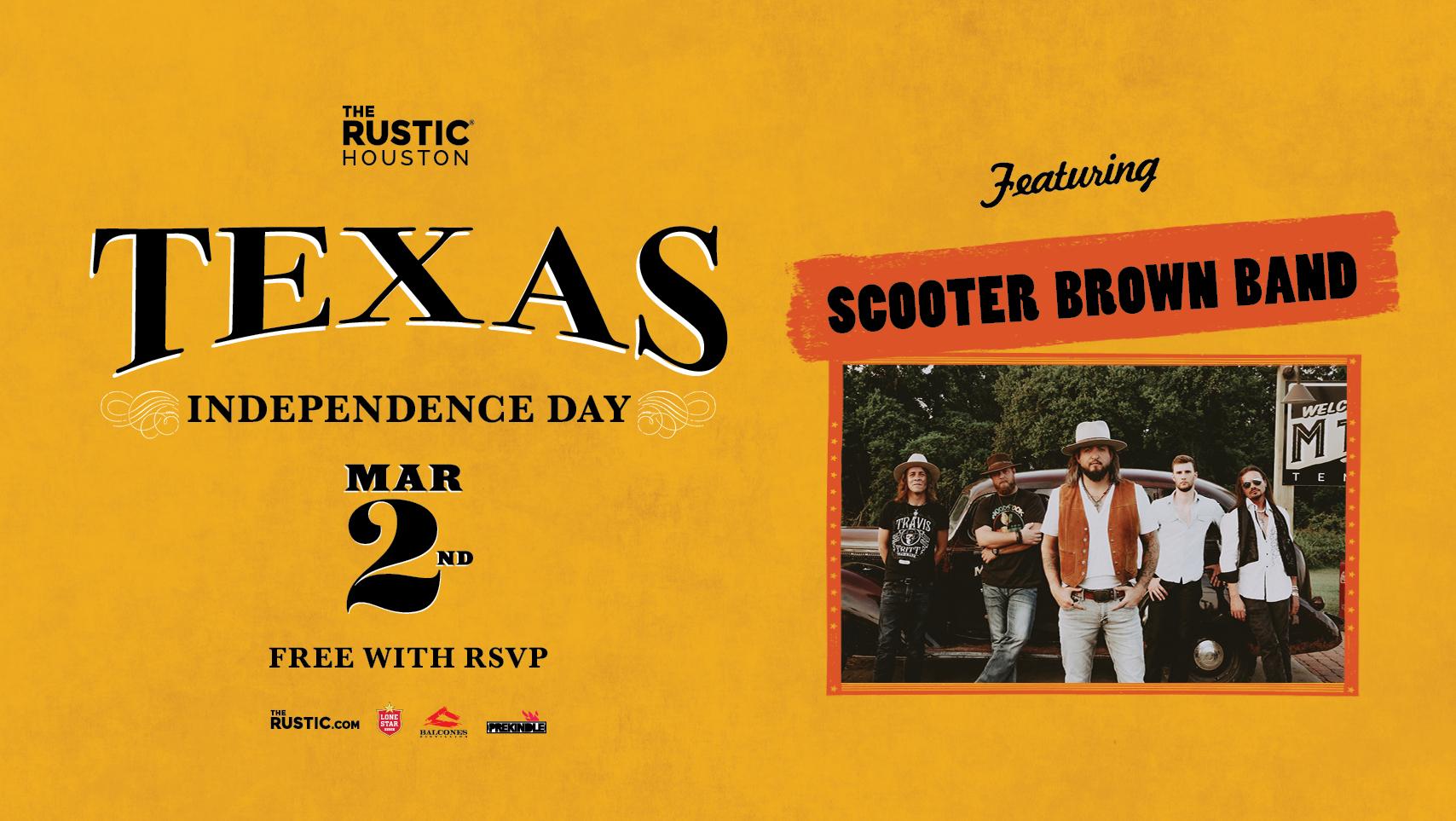 Come out to The Rustic to honor our Lone Star State and celebrate Texas Independence with free live music by Scooter Brown Band!

About Scooter Brown Band:
After four years and three months, two tours overseas with one tour of combat in Iraq as a United States Marine, Scott Brown traded his guns in for guitars and hit the road. Scooter Brown Band was formed and began playing mainly in and around Houston, Texas. They have toured North America and opened for some of their biggest influences including Charlie Daniels Band, Travis Tritt, Dwight Yoakam, Lee Roy Parnell and the Marshall Tucker Band, just to name a few. With two of the members having served in the military, they dedicate significant time doing work for Veteran Support Organizations like Base Camp 40 - Warriors in the Wild, Lone Survivor Foundation, and the Chris Kyle Frog Foundation.

For the last few years the band has been building a new era in their career. Defined as modern southern rock, the band released American Son in late 2017 and was named by Artists to Watch by Rolling Stone. Spotify supported the title track of the album on playlists including “Country Rocks,” “Southern Rock 101” and “Texas Music Now.” Brown was featured as a finalist on USA Network’s “Real Country” in 2018 and was awarded Male Vocalist of the Year at the Third Annual Rocky Mountain Country Music Awards presented by iHeartRadio. In July 2019 they made their debut on the Grand Ole Opry stage, introduced by fellow road warrior, Opry-member Charlie Daniels. The band has continued a rigorous touring schedule while writing with some of the biggest songwriters in Nashville and recording new music set to release in 2020.

TIPS for the show
-- ARRIVE EARLY: This event is majority standing room throughout the facility.
-- RAIN OR SHINE
-- TICKETING QUESTIONS? Contact Prekindle Online Ticketing at www.prekindle.com.
-- PARKING: Parking is available at the Discovery Green lot (1500 McKinney) – first 3 hours is complimentary with validation from The Rustic. There is also limited $10 valet parking available at The Rustic.
-- RIDE SHARING is strongly suggested. Don't drink and drive!
-- ALL AGES are welcome!