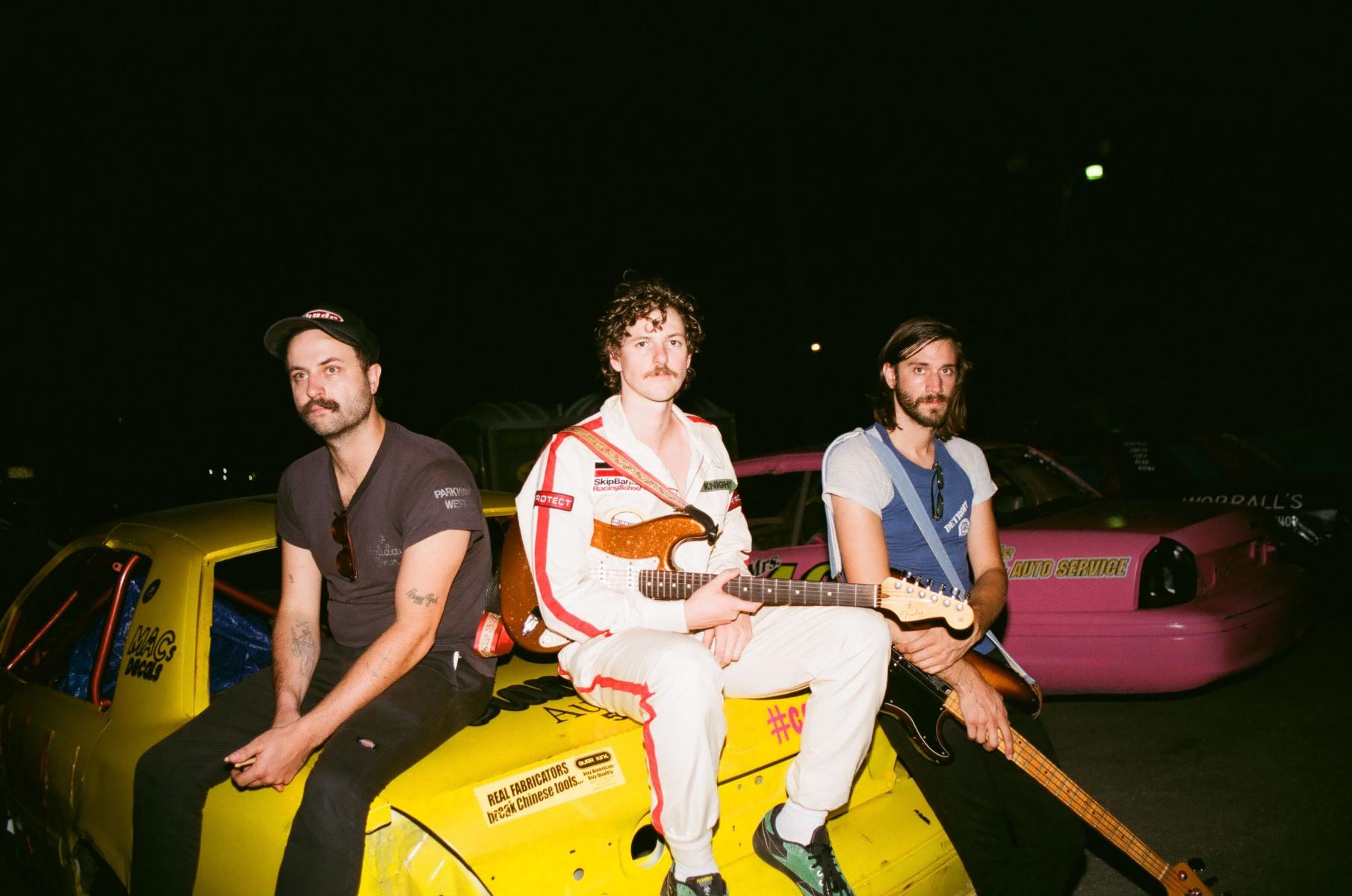 In late 2011, Matt Myers, Zak Appleby and Shane Cody started playing music together in a historic home in New Albany, Indiana dubbed “The Green House.” Its rooms were adorned with relics from times past, so it was no surprise that songs such as “Penitentiary” bounced off the walls. Nostalgic sounds from their first album seemed to serve as a welcome escape for listeners from the relentless demands of the digital age. But if you asked any one of the guys, they were ‘just having fun.’

Houndmouth signed with legendary indie label Rough Trade Records in 2012. From The Hills Below The City landed them on several world-famous platforms such as fellow lovable Hoosier, David Letterman’s stage. When vocalist, guitarist, and songwriter Matt Myers first spoke with big-name producer Dave Cobb prior to working together on their sophomore LP Little Neon Limelight, the two laughingly agreed to “not make another fucking boring Americana record.” A natural sounding album captured in a familiar fashion came together, except this time with a #1 adult alternative radio single in “Sedona.” “I never once thought of us as an Americana band,” says drummer Shane Cody. “The four of us were just a rock band, but some of us had Southern accents,” he laughs. Cue Golden Age, the third album featuring some of the band’s most innovative and experimental songs yet. Coining the term “retro future”, Houndmouth combined creative songwriting with avant-garde instrumentation like the synthesized roar of an actual black jaguar on the track “Black Jaguar”.

The band finds themselves recording and also touring their upcoming untitled fourth album expected to release in 2021. From their humble start, genre-defining hits, and experimentation, Houndmouth has and continues to make their impactful felt with the unique take on storytelling through music.

Since his earliest infatuations with guitar, Buffalo Nichols has asked himself the same question: How can I bring the blues of the past into the future? After cutting his teeth between a Baptist church and bars in Milwaukee, it was a globetrotting trip through West Africa and Europe during a creative down period that began to reveal the answer.

“Part of my intent, making myself more comfortable with this release, is putting more Black stories into the genres of folk and blues,” guitarist, songwriter, and vocalist Carl “Buffalo” Nichols explains. “Listening to this record, I want more Black people to hear themselves in this music that is truly theirs.” That desire is embodied in his self-titled debut album—Fat Possum’s first solo blues signing in nearly 20 years—composed largely of demos and studio sessions recorded between Wisconsin and Texas.

Born in Houston and raised in Milwaukee’s predominantly Black North end, the guitar was Nichols’ saving grace as a young man. The instrument captured his fascination, and provided him with an outlet for self-expression and discovery in isolation. While other children chased stardom on the field, court, or classroom, Nichols took to his mother and siblings’ music collections, searching feverishly for riffs to pick out on his instrument. Sometimes, this dedication meant listening to a song 200 times in order to wrap his mind around a chord; as a teenager, it even routinely meant staying home from school to get extra practice.

It would’ve required a more than arduous journey across town to find a secular circle to jam with in a city still reeling from redlining and segregation, so despite a lack of a religious upbringing, Nichols went sacred. A friend invited the teenage guitarist to church for a gig and the opportunity proved to be Nichols’ much-needed breakthrough to music circles in the area. But over the following years, he began to feel overextended, and abandoned the demanding grind of a supporting role in nearly ten Milwaukee scene bands, none of which bore his vision as a lead performer. “I was happy with all the stuff that I was doing, and I was learning, but I wasn’t playing anything that was very creatively fulfilling,” Nichols says. “I needed the time and space. I was overwhelmed.”

Stints in college and in the workforce led him overseas, where the appreciation of African-American folkways lit a renewed spark in Nichols. It was the bustling of jazz in places like the working class areas of Ukraine, or in Berlin cafes where expatriate Black Americans routinely treat fans to an enchanting evening of blues, that would lead to his a-ha moment. Nichols returned home to America, meditating on his own place in the music that holds the country’s truest values and rawest emotions between bar and measure. “Before this trip, it was hard for me to find that link between all these blues records I heard and people who are living right now. I figured out it’s not a huge commercial thing, but it still has value. So, I came home and started playing the blues more seriously, doing stuff with just me and my guitar,” Nichols says.

Nichols admits that anger and pain are realities that color the conversations and the autobiographical anecdotes behind his observational, narrative-based approach to songwriting. However, with his lyricism on Buffalo Nichols, he intends to provide a perspective that doesn’t lean heavily into stereotypes, generalizations or microaggressions regarding race, class and culture. The album sees Nichols wrestling with prescient topics, such as empathy and forgiveness on the poignant, ever-building melody of “How to Love;” regret and loss on moving, violin-inflected “These Things;” and the pitfalls of lives lived too close to the edge on the smooth, dynamic “Back on Top.” On the tender, aching album opener and lead single “Lost & Lonesome,” he gives listeners what he describes as a “glimpse into the mind of that traveler looking for a friend and a place to call home;” inspired by his years traveling alone, looking for a place for his passions to fit in, even if temporarily, the track is an ode to exploration and the creative ingenuity of isolation. At the forefront of each song is Nichols’ rich voice and evocative, virtuosic guitar-playing, augmented on half of the nine tracks by a simple, cadent drum line.

While acknowledging the joy, exuberance and triumph contained in the blues, Nichols looks intently at the genre’s origins, which harken back to complicated and dire circumstances for Black Americans. With this in mind, Nichols says there is a missing link, which he’s often used as a compass: Black stories aren’t being told responsibly in the genre anymore. To begin changing that, Buffalo Nichols gets the chance to tell his own story in the right way.