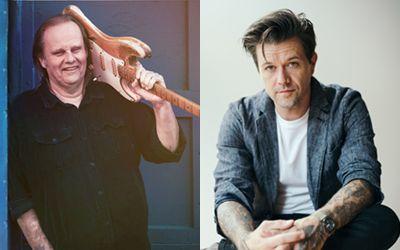 WALTER TROUT and Provogue Records / Mascot Label Group released Survivor’s Blues globally on January 25.  Trout is no ordinary artist and this is no ordinary covers album. From the day he conceived the project to the moment he counted off the first song in the studio, he had a bolder plan for this release.  Trout shares, “I’m riding in my car sometimes, and I’ve got a blues station on – and here’s another band doing Got My Mojo Workin’. And there’s a little voice in me that says, ‘Does The World need another version of that song?’ So I came up with an idea. I didn’t want to do ‘Stormy Monday’ or ‘Messin’ With The Kid.’ I didn’t want to do the Blues greatest hits. I wanted to do old, obscure songs that have hardly been covered. And that’s how Survivor Blues started…”

Over the course of the last several decades, Walter Trout has been a prolific artist.  He’s regularly released offerings from the studio, so this moment of offering a covers album is somewhat of a curveball.  His 2017 all-star release, We’re All In This Together, shows no sign of burning out and continues to receive accolades and sales on a global basis, alongside four awards for Blues Rock Album Of The Year.  He reflects, ”It’s really overwhelming. How do I follow that up? I’ve always respected guys who went out on a limb, like Neil Young or Bob Dylan. You never know what they’re gonna come out with.”

Likewise, long-standing fans have given up trying to second-guess Trout’s next move. The track listing of Survivor Blues is a window into the 67-year-old’s fast-moving backstory, chronicling a five-decade career whose one constant is his deep love of the Blues. Opener “Me, My Guitar And The Blues” tips a hat to cult hero Jimmy Dawkins, whose records Trout devoured while cutting his teeth as a ’60s axe-slinger in New Jersey. “Nature’s Disappearing” nods to his celebrated ’80s tenure in John Mayall’s near-mythical Blues-breakers. In-between, you’ll find cherished favorites from a lifetime’s listening, with songs that caught Trout’s ear at key junctures in his journey, from backing up John Lee Hooker in the ’70s, to bringing the groove to Canned Heat in the ’80s or breaking through as a solo artist in the ’90s.

The roll-call of artists might be eclectic, but there’s a cohesion to Survivor Blues. From the outset, Trout made it his mission to harness the power and spirit of the originals, while stamping his inimitable musical personality onto each new take. He offers, “My idea was to do these songs like me, to arrange them for my band and style – not to just copy the originals note-for-note.”

Last September, as recording began at the Los Angeles studio of iconic Doors guitarist Robby Krieger, Trout and long-standing producer Eric Corne shared their vision with the only band who could measure up. The thunder and finesse of drummer Michael Leasure. The muscular groove of bassist Johnny Griparic. The spell-casting fingers of keyboards session god and regular Trout conspirator, Skip Edwards. “I’d play them the original,” remembers Trout, “and then I’d say, ‘Here’s how the song goes, what have you got?’ I’d give these guys a lot of freedom. The record was mostly done live, with us set up in a circle, just to get the feel of us going there together. And you can feel it, y’know?”

Walter Trout has a connection to each of these songs selected. He reflects on Chicago Bluesman Jimmy Dawkins never receiving the recognition deserved in covering “Survivor Blues.” He reveals, “The last line – ‘Since you left me, All I have left is Me, My Guitar and the Blues’ – is one of the greatest lyrics I’ve heard in my life and I start crying just saying it. And my wife thinks it’s the best thing I’ve ever done.”  Sunnyland Slim’s “Be Careful How You Vote” stresses the importance of choosing carefully at the ballot box, without taking sides. Certainly relevant for all members of society. Universal themes are also explored on Otis Rush’s defiant “It Takes Time” and the funk-flavored groove of Luther Johnson’s “Woman Don’t Lie.”  With J.B. Lenoir’s
“Talk To Your Daughter,” he recalls, “I found this song that Lenoir does all by himself with the guitar, very slowly, almost without even a rhythm. I played the original to the band and said: ‘Now we’re gonna turn it into Jimi Hendrix’. I wanted to use it as a vehicle for the band and for my guitar-playing and vocals. I wanted to belt it out.”

There’s rarely been a Trout record without a tip of the hat to Mayall, and here the Brit-blues godfather is represented by “Nature’s Disappearing.” He reveals, “I was nervous about doing it because it’s by my mentor and surrogate father. John told me he’d read an article about ecology and pollution – he put the magazine down at the end and wrote that song in five minutes. It’s even more relevant today, with all the environmental regulations being thrown out and national parks being sold off to oil companies.

You don’t hear a track like Goin’ Down To The River every day either, with Mississippi Fred McDowell’s ancient gem decorated with slide guitar from a very special guest. “There was something about the lyric,” muses Trout. “Y’know, ‘I’m going down to the river, I’m gonna let the waves and the water wash my trouble down’. It tore me up. But the original is very different. I decided to take the verses that spoke to me, and then rearranged the song almost Muddy Waters-esque with that slide lick. Robby Krieger was coming in every day, listening and hanging out, so I said, ‘I’d love it if you played on this song’. So when I say ‘Play it, Robby’ – that’s Robby Krieger from The Doors. We just did that in the studio – boom, there you go.”

All they needed was a title. And as Trout surveyed his bloodied-but-unbowed cohorts – and reflected on a collection of blues songs whose raw power remained undimmed – he knew the suggestion of his wife and manager, Marie, couldn’t be topped. “We started thinking about these enduring songs and the guys playing on the album,” he reflects. “Mike is in recovery. Johnny almost didn’t make it. Skip has had a triple bypass. And I almost didn’t make it after my liver disease in 2014. So Marie said to me, ‘You’re a group of survivors. You’ve all been through hell and you’ve come back. These songs are survivors. This album needs to be called Survivor Blues’. I just looked at her and said: ‘You got it’.”

Of course, when it comes to Walter Trout, survival is an understatement. Survey the glittering late-bloom career of this ageless bluesman and all evidence suggests an artist on a steep upward trajectory. Trout nods: “My career is going great. My kids are doing great. My wife and I are madly in love. I’m the most healthy I’ve ever been. So I haven’t just survived. Right now, I’m in the best time of my life…”

“Life is never going to go exactly the way you think it will,” says Eric Tessmer, “but I’ve come to
appreciate that fact. Good things take time.”
Tessmer’s stellar new release, ‘EP II,’ is proof of that. Three years in the making, the collection
was recorded in Los Angeles with acclaimed producer Sean Beavan (Nine Inch Nails, Guns N’
Roses), and it finds the incendiary Austin guitarist matching his technical flash with new heights
of lyrical craftsmanship and studio sophistication. The performances here represent Tessmer’s
most raw, powerful work to date, tackling sobriety, commitment, and redemption with both deep
insight and fearless vulnerability. It’s a remarkable step in an already remarkable career, one
that showcases a virtuosic instrumentalist boldly stretching his limits and embracing his artful
evolution as a singer and songwriter.
“I wanted to go deeper than I ever have before with this EP,” says Tessmer. “I still love ripping
things up on the guitar, but this time around, I wanted to save that more for the live show and
really focus on concision in the studio.”
A Wisconsin native, Tessmer developed his love affair with music through a kind of familial
osmosis. Both his grandmother and father played guitar, and Hendrix, Led Zeppelin, and Cream
were all staples around the house growing up. Inspired in part by watching reruns of Austin City
Limits on his local PBS station, Tessmer moved to Texas straight out of high school, and he
quickly garnered a formidable reputation there for his fierce fretwork and explosive live
performances. He cut his teeth playing residencies in clubs and bars, shared stages with
everyone from Gary Clark, Jr. to Tab Benoit, and released a series of live and studio albums
that earned widespread critical acclaim, with the Austin Chronicle dubbing him an “SRV-fast
firebrand” and the Austin American Statesman hailing him as a “working class guitar hero.”
‘EP II’ reflects the loose, energetic freedom that’s become Tessmer’s trademark, with searing
rocker “The Treatment” kicking things off with an infectious guitar riff that at once calls to mind
AC/DC and ZZ Top. It’s a love song, no doubt, but in typical Tessmer fashion it comes with a
dark edge, a hint of danger that flows just beneath the surface. The slow-burning “Good So
Bad” grapples with the rollercoaster of addiction and recovery, while the eerie “Early Early
Morning” mixes romance and film noir, and the swampy “Po’ Boy” is a funky instrumental
fireworks show. Though the collection prizes economy, Tessmer’s sprawling cover of friend and
collaborator Anders Osborne’s “Love Is Taking Its Toll” is a notable exception, clocking in at ten
minutes of blistering guitar work and smoldering vocals. Of all the standout moments on the EP,
though, it’s perhaps the soulful “Simple Solution,” an anthemic ode to music itself, that captures
Tessmer’s spirit best.
“I must have had ten different sets of lyrics for that song,” he remembers. “I felt this pressure to
be ‘profound,’ but then I realized that the most profound thing I could do was to stop taking
myself too seriously, crank the music up, and do what I love to do.”
It may have taken a while to get there, but the finished product is everything Tessmer hoped it
would be and more. Good things take time, after all, and a collection as strong as ‘EP II’ is
undoubtedly worth the wait.