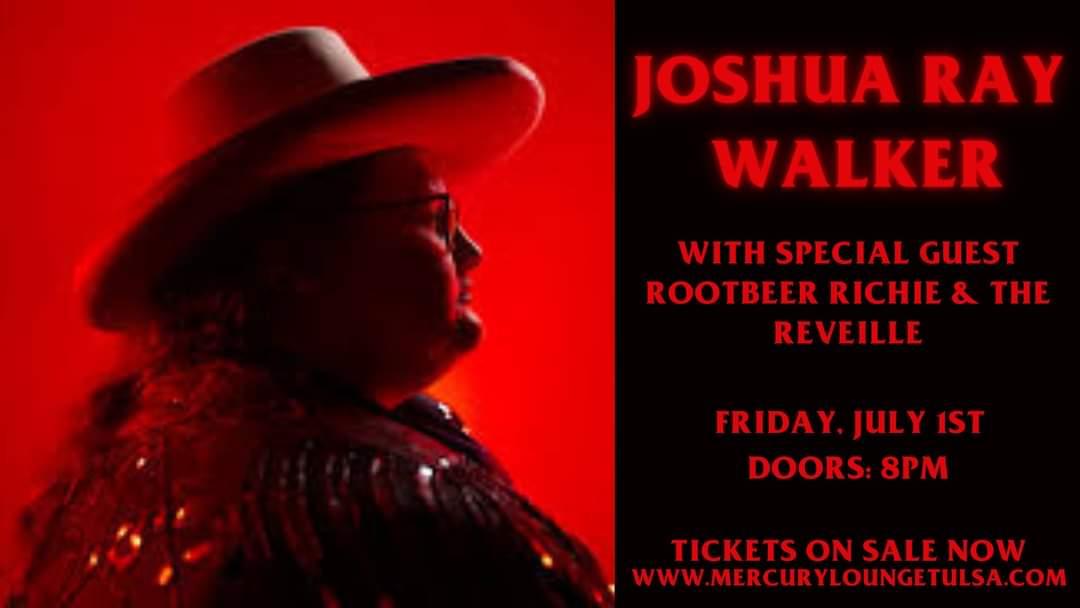 On his new album See You Next Time, Texas-bred singer/songwriter Joshua Ray Walker shares an imagined yet
truthful portrait of a brokedown honky-tonk and themisfits who call it home: barflies and wannabe cowboys,
bleary-eyed dreamers and hopelessly lost souls. His third full-length in three years, the album marks the final
installment in a trilogy that originated with Walker’s globally acclaimed 2019 debut Wish You Were Here and its
equally lauded follow-up Glad You Made It (the #5 entry on Rolling Stone’s Best Country and Americana
Albums of 2020 list).
“The whole idea with the trilogy was to use the honky-tonk as a setting where all these different characters
could interact with each other,” says Walker, who drew immense inspiration from the local dive bars he first
started sneaking into and gigging at as a teenager growing up in East Dallas. “In my mind, this album’s taking
place on the night before the bar closes forever—the songs are just me taking snapshots of that world, and all
the moments that happen in it.”
Like its predecessors, See You Next Time came to life at Audio Dallas Recording Studio with producer John
Pedigo and a first-rate lineup of musicians, including the likes of pedal-steel player Adam “Ditch” Kurtz and
rhythm guitarist Nathan Mongol Wells of Ottoman Turks(the country-punk outfit for which Walker sidelines
as lead guitarist). The album’s immaculately crafted but timelessly vital sound provides a prime backdrop for
Walker’s storytelling, an element that endlessly blurs the lines between fable-like fiction and personal
revelation. “I learned a long time ago that writing from a character’s perspective lets me examine things about
myself without ever feeling too self-conscious aboutit,” he points out. Closely informed by the tremendous
loss he’s suffered in recent years, See You Next Time emerges as the most powerful work to date from an
extraordinarily gifted songwriter, imbued with equal parts weary pragmatism and the kind of unabashedly
romantic spirit that defies all cynicism.
On the album-opening “Dallas Lights,” Walker presents a potent introduction to the vast and
sometimes-harrowing emotional terrain of See You Next Time. “I used to hang out in Lower Greenville, which
is a neighborhood in Dallas with a lot of homelesspeople,” he says of the song’s origins. “One of theguys
there knew someone who’d passed away and there was nobody to claim the body: no wife, no family, no
kinfolk at all. I was really struck by how terrible that was, and over the years it became a song about
hometown pride, and wanting to die where you lived.” Anchored by the heartrending fiddle work of Heather
Stalling, “Dallas Lights” ultimately lends a bit of glory to that tragedy, its chorus lyrics unfolding as their own
resolute prayer (“Lord, don’t bury me deep/Under the sycamore tree/Burn Me/Spread Me/Where the city
can be seen”).
In its nuanced exploration of so many disparate moods—grief and celebration, sorrow and surrender—See
You Next Time takes an entirely unexpected turn on its lead single “Sexy After Dark.” Fueled by a fiery horn
section, the wildly catchy track hits a brilliant balance of bravado, soul-stirring confession, andbrutally
self-aware humor. “There’s a deep history of sexy-crooner country songs played by dudes who were pretty
unsexy by all accounts but still had so much swagger,” says Walker. “‘Sexy After Dark’ was my attempt at
writing a song like that, a fun song I’d want to crank up and party to. It all came back to wanting to really
push the boundaries of what I could do on this album.”
In a stunning tonal shift, See You Next Time then delivers its most devastating moment, the intensely intimate
“Flash Paper.” “My dad had a four-year battle with lung cancer and passed away in November, and before he
died he gave me a cigar box full of notes and cards and lots of random little things, like a ribbon froma
reading competition from when he was in elementary school,” says Walker. “He also put in a flash drive with
a video he’d recorded, which he told me not to watch until Christmas. My dad was from East Texas and kind
of a good-old-boy type, and the video was really vulnerable for him. Some of it was similar to things he’d said
over the years, as he dealt with his illness and the two of us grew closer, but that song’s mostly aboutme
wishing I’d heard more of those things while he wasstill here.”

With its untethered textures and beautifully sprawling guitar tones, “Flash Paper” bears a mesmerizing quality
that magnifies its raw emotion. “That was definitely the hardest one for me to write on the album—I broke
down multiple times in the process,” says Walker, whose voice slips into an achingly tender howl at the
chorus. The final track recorded for See You Next Time, it’s also one of several songs that Walker pennedin the
dead of night, while his home was undergoing massive reconstruction following the rupture of a hot-water
pipe. “Half my house was torn apart, and I was living at an extended-stay hotel, but I couldn’t get any writing
done there,” he says. “I didn’t want to move back the recording sessions, so I ended up going back to my
house late at night and staying up for hours to finish some songs. I remember thinking at the time that it was
pretty depressing—writing at 4 a.m. in this torn-apart house with no furniture and no heat in the middle of
winter—but looking back, I think it’s good that I was forced to be totally alone and just think.”
Another profoundly heavy-hearted track, “Gas Station Roses” reveals the poetic sensibilities within Walker’s
songwriting. “There’s a double meaning to that song—it’s partly referring to the roses you’d find in a gas
station around Valentine’s, but it’s also about how gas stations get away with selling crack pipes by hiding
them in those glass tubes with the origami flowers,” he explains. Layered with bright piano melodies and
Pedigo’s cascading banjo rolls, “Gas Station Roses” offers a clear-eyed meditation on the hardship of
addiction (“We’re like gas station roses/You can wrap us however you’d like/If you prop us up in pretty
poses/We’ll really catch the light”). “I grew up around a lot of kids who had parents with substance-abuse
issues, and in high school a lot of my friends gothooked on heroin,” says Walker. “This song in particular is
about crack, but the overall story is addiction leading to a loss of innocence.”
A working musician since the age of 13, Walker firstbegan honing his lyrical talents after the death of his
beloved grandfather. “My granddad’s the one who got me into music, and I wrote a song called ‘Fondly’ in
the parking lot of the hospital he was in,” recallsWalker, who was 19 at the time. “Back then I was mostly
playing rock and punk and blues and metal, but I quickly realized that the songs I was writing were country
songs.” Raised on bluegrass, he lists Texas legends like Guy Clark and Billy Joe Shaver among his essential
inspirations, but also notes the undeniable influence of country superstars likeAlan Jackson and George Strait
(“All those ’90s country songs were so hook-driven, they really bored into my brain,” he says). With the arrival
of Wish You Were Here (an album that spent 12 consecutive weeks on the Americana radio albums chart),
Walker won lavish praise from outlets like NPR Music and began opening for such artists as Colter Wall and
Charley Crockett, in addition to headlining tours in the U.S. and Europe. Hailed by No Depression as “an
album that outshines expectations for what country music can, and should, sound like,” Glad You Made It
earned the admiration of leading critics like AnnPowers (“a new voice who really impressed me”), with its
singles featured on such coveted playlists as Spotify’s Indigo and Tidal’s Best of Country 2020. Over the years,
Walker has continually captivated crowds with his magnetic live show, a feat that finds him joined by
musicians like bassist Billy Bones and drummer Trey Pendergrass (both of whom played onSee You Next
Time). “I’m really proud of the band on this record, and I’m also proud that I didn’t just go out and get hired
guns from Nashville or Austin,” Walker says. “They’re guys I’ve played with for 10 or 15 years, and at this
point we’re all like family.”
True to that communal spirit, See You Next Time closes out on its sing-along-ready title track: a fitting end to
Walker’s trilogy and its tribute to the fleeting, yet possibly life-changing, connection to be found at your
nearest honky-tonk. “There’s not a lot of pretensionat a honky-tonk, and there’s much more interaction than
in other bars—you see a lot less people on their phones,” says Walker. “We’re there to talk to other humans,
put a song on the jukebox and dance with a stranger, get to know your bartender and tell them all your
problems. I really wanted to capture that feeling on this record—I want everyone to feel like they know all
these characters, and that they’re somehow better understood because these songs exist.”