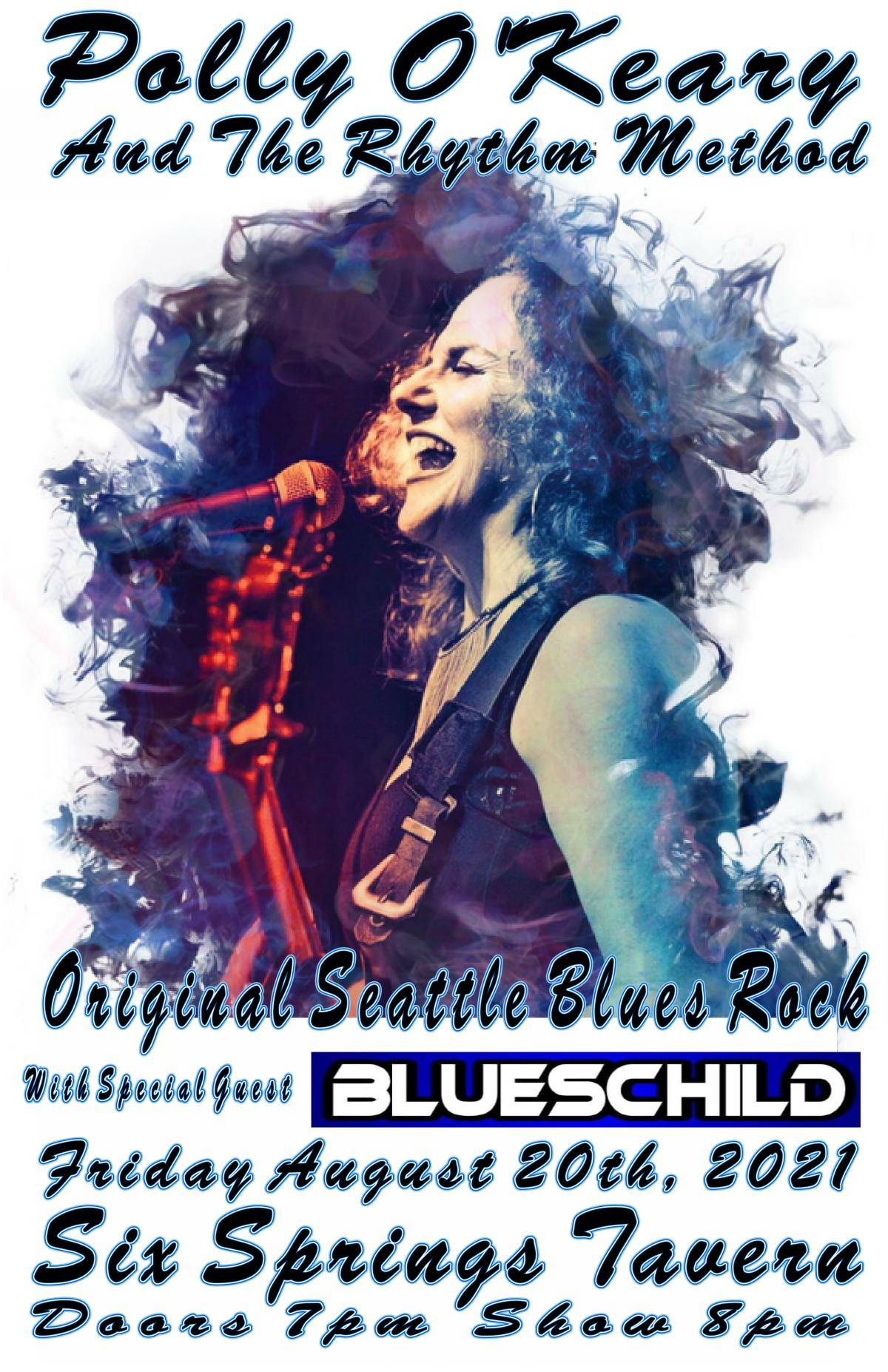 A century ago, blues was born in the fields of the South, played on porches and in little backwoods bars by kerosene lamp. The times have changed, and it’s a rare blues musician who grew up picking cotton and going home to learn to play by the light of a kerosene lamp.

Polly O’Keary certainly didn’t. Well, that is, she didn’t pick cotton. She picked apples. But she learned to read music by kerosene lamp, in a log cabin in a remote part of Washington State. She started playing in ex-pat bars in Mexico at 16, and Eastern Washington watering holes for rural farm workers at the age of 17. She dropped out of school with an 8th grade education, married a prison-bound man at the age of 18 and by the time she was 21 had logged more stage hours than most musicians twice her age. She’d drunk as much as a fair number of them as well.

At 28, upon seeing Jeff Healey at a friend’s bar in Canada, she became obsessed with blues, studying and practicing the genre until carpel tunnel syndrome temporarily rendered her hands nearly immobile, and she quickly came to the attention of the Pacific Northwest blues scene with her powerful and emotional voice and her frenetic stage presence.

Today, she’s a PhD student, a world-traveled bassist, one of Washington State’s most highly-awarded female blues singers and songwriters (six-time Washington Blues Society Best Female Vocalist, four-time Best Blues Songwriter, etc.), doesn’t drink at all, and no longer visits lovers in prisons. But her music reflects the life of a modern blues woman; she’s seen the river rise and take everything more than once, and lived to laugh, sing, and write music about it.

Polly O’Keary is today’s blues woman, rooted in tradition, but informed by the 21st Century. Pulling in influences from zydeco, country, funk, jazz, rockabilly, surf and rock and roll, she and her trio, Polly O’Keary and the Rhythm Method, bring a searing and joyful performance of today’s blues to audiences across the U.S. and Canada.

Polly O’Keary and the Rhythm Method is the trio she built with her husband and drummer Tommy Cook, also a highly sought touring drummer and winner of the 2017 Washington Blues Society Blues Drummer award, with whom she shared rhythm section duties for international touring act Too Slim and the Taildraggers for four years.

​Rounding out the trio is David Miller, who grew up listening to blues in Texas.  At 17, then living in California, Miller met a piano player who was then working for Tommy Castro. The older musician recruited Miller to come play at several bars, and assured the young man that he could get him in, underage though he was. Miller became a regular in clubs in the Bay Area, sitting in with local and touring acts night after night. At 25, then living in San Luis Obispo, he assembled The Dave Miller Band, and for the next 18 years, he and the group went on to become one of Southern California’s most popular blues bands, leading one reviewer to describe his “jaw-dropping guitar licks” and praise his “extraordinary mixture of inspiring virtuosity both vocally and instrumentally.”

Critics love Polly O’Keary and the Rhythm Method’s 2017 album Black Crow Callin’, which has been in the Top 20 on Roots Music Report’s blues rock chart since its May 1 radio release:

“A power blues trio in the finest sense of the term- guitarist David Miller is a revelation. The songwriting is consistently strong and catchy without ever losing its driving edge”-Chameleon Fire

“A powerful voice, full of the primitive force of the blues” –Historia Del Blues

“O’Keary is a powerful singer- a primal force…mastery of the groove is everything- if you don’t have that you’re missing the point, and Polly O’Keary & The Rhythm Method have it down cold…extremely cool” Gonzo Okanagan

“Just listen to the monster bass playing…” Blues in the South

“Polly O’Keary strong voice is an instrument in itself. With such a tight backing band, this is release is a must!”-Key and Chords
​
“It’s unanimous, we love Black Crow Callin’, in which Polly O’Keary and the Rhythm Method put finesse and talent, as well as all their passion and energy. Essential!” – Zicazac,

“She is a great bassist (and soloist!) besides being an excellent singer, Polly O’Keary and the Rhythm Method deserve your attention,” Rootstime
“Polly has a voice equally at home screamin’ and cryin’,  shoutin’ and testifyin! As it is with all great musicians, Polly O’Keary pulls out all the stops with her clever, topical original songwriting and first-class musicianship for ‘Black Crow Callin’.’  This set is primal, passionate blues from a woman who’s seen hardship first-hand and come out on the other side!” Don and Sheryl’s Blues Blog.

“With powerful pipes like Bonnie Raitt and Etta James, bass licks worthy of Sir Paul or Sting, and a musical chemistry that is head and shoulders above many other bands, these cats have come to sing. They immediately grab your attention from the first note of the album, and never let up… The combination of rich guitar and bass riffs and soaring blues vocals creates music that will stimulate your senses and make you want to move.  Get out and get it and thank us later.” LA Music Critic

“Blues from the heart, full of enthusiasm and life experience,” Rudolf’s Music.

“This hard hitting, primal blues rocker knows her mind and heart…O'Keary can blaze her own trail and beat all comers to the finish line…Excellent stuff.” –Midwest Record.