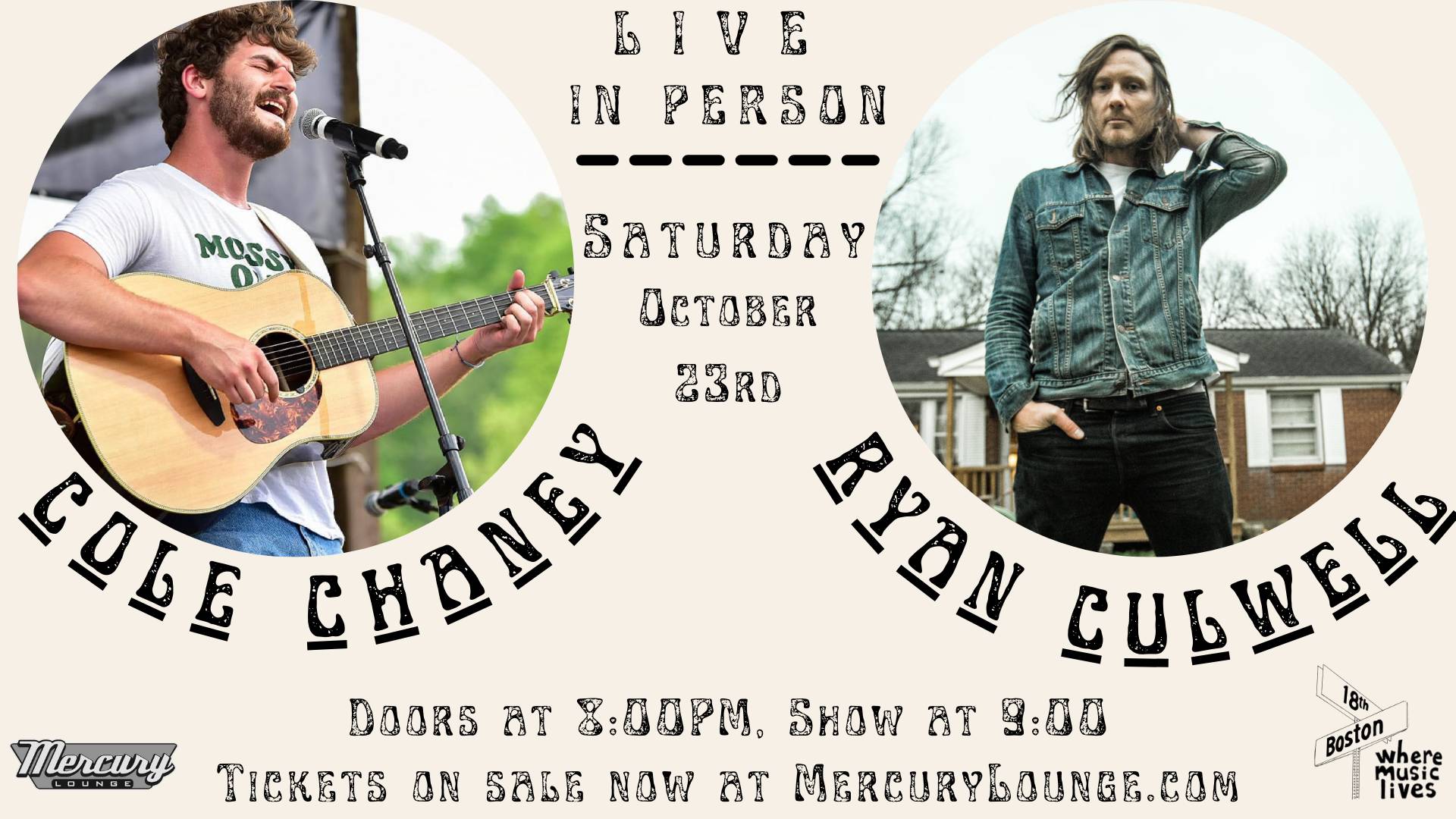 "Cole is from the Kentucky town of Cattlesburg right on the banks of the Ohio River, and right near the confluence of the Kentucky, Ohio, and West Virginia borders. Where many have dipped their toes into the Kentucky experience with their music, Cole Chaney wades in up to the neck, hollering and wailing about coal mines, flooding catastrophes, dreams cauterized in their infancy due to fleeting opportunities, and other conflagrations that the captivating and hearty characters of the region regularly experience, and that makes such compelling art and stories in the form of country music."

When Ryan Cullwell released his critically acclaimed 2015 album ‘Flatlands,’ Rolling Stone hailed the collection as both “gorgeous and bleak,” and the intervening years of the Texas native’s life could be described in similarly contradictory terms. Culwell has touched the top and scraped the bottom, known true joy and faced pure sorrow, been blessed with luck and cursed by tough breaks. He welcomed daughters number three and four into the world, only to nearly lose his life working odd jobs just to make ends meet. It’s been a beautiful, brutal time for Culwell, one that he’s woven into the fabric of his most stunning songs yet with ‘The Last American,’ his third album and debut release for Missing Piece Records. Recorded in his adopted hometown of Nashville, the collection showcases Culwell at his finest, crafting poignant portraits of ordinary folks just trying to get by, men and women doing their best to make it through the day with dignity and self-respect in these trying times.

“When I grew up and started traveling around the country, I began seeing certain truths in people’s struggles and pains, and I realized that the America that was given to me wasn’t what I’d been told it was,” Culwell reflects. “The patriotism that my father passed down didn’t have anywhere to land because that America simply didn’t exist. I’m a father myself now, and I think part of the inspiration for these songs was to try and give my children the tools to love this country for what it is and what it can be, to provide them with an accurate picture of where they are and what it means to love and hope and have empathy.”

Love and hope and empathy have long been touchstones of Culwell’s writing, a style that NPR raved “wring[s] grace from plain and often dark details, expressing the realities of class and region in ways that many other writers barely touch.” ‘Flatlands’ was a stark meditation on the forgotten emptiness of the Texas panhandle, and its sparse arrangements and profound lyrics drew plaudits from around the world. Rolling Stone said that Culwell has “a voice as big as the Texas horizon,” while Guitar World praised the album as “masterfully crafted and artfully delivered,” and Country Weekly called it “both deeply personal and universal in its depiction of struggle.” In the UK, Mojo gushed that Culwell “shapes his characters with dirt, blood, [and] spiritual foreboding,” and The Mail On Sunday proclaimed that the album “heralds a gritty, poetic new American voice.” The music earned Culwell dates with Patty Griffin, Hayes Carll, Ashley Monroe, Billy Joe Shaver, and Amy Speace among others, and racked up more than a million streams on Spotify.

You can’t feed a family on good reviews alone, though, and as Culwell’s brood grew, he had a choice to make about the kind of father and husband he wanted to be.

“I see a lot of guys in this business forego relationships and families, and my wife and I decided we weren’t going to do that,” says Culwell. “I’ve been married almost fourteen years and I’m committed to home life, but it takes sacrifice and balance.”

Culwell put touring on a temporary hold to be there for his kids, and in order to help pay the bills, he took on a series of increasingly odd jobs: roofing salesman, landscaper, tree cutter, pedal tavern driver. Each took its toll, and while ferrying drunk bachelorettes around Nashville on an alcohol-fueled megabike was perhaps the most harrowing, it was the tree-cutting job that nearly killed him.

“I was out working by myself when I made a poor cut on a fallen tree and it started rolling at me,” he remembers. “I ripped my shoulder out of my socket and came within an inch of cutting my face in two that day.”

Around the same time, Culwell’s friends Ethan Ballinger (Lee Ann Womack, Aubrie Sellers) and Megan McCormick (Jenny Lewis, Conor Oberst) approached him about getting back into the studio. It was nothing serious, they assured him, just a few songs for fun, but he quickly realized they had grand designs on producing a full length LP for him. Culwell had been reluctant to commit to making another album, but he soon found himself deeply invested in the project and grateful that he’d been tricked into it. They worked off-hours at Zac Brown’s Southern Ground studio, recording a few songs here and a few songs there whenever Ballinger and McCormick’s touring schedules allowed. With half the album completed over the course of nearly a year, Culwell added producer and longtime collaborator Neilson Hubbard (Glen Phillips, Apache Relay) to the team, and the remaining songs were finished in a short burst of concentrated writing and recording at Hubbard’s studio.

“I knew that last batch of songs was going to be an intense sprint, and the team and environment evolved perfectly to let the album flex into full form,” says Culwell. “Having Ethan, Meghan, and Neilson all producing together in a small studio like that was the perfect setup for capturing the chaos and the intimacy of the music. Imagine having Brett Favre, Drew Brees, and Peyton Manning all calling the shots at once, but with the humility to defer to each other most of the time. It was weird and tense and glorious.”

The album opens with the dreamy “Can You Hear Me,” a reverb-soaked rocker that calls to mind the swirling soundscapes of The War on Drugs mixed with the anthemic drive of Bruce Springsteen. The album’s sound is a major leap from the stripped-down weariness of ‘Flatlands,’ but Culwell pulls it off with ease, drawing on a cast of characters who are alternately motivated by hopeful promise and bitter resentment. On the relentless, fuzzed-out “Dig A Hole,” he channels the anger and helplessness that run rampant in parts of the country looking for someone, anyone, to lash out at for their struggles, while the wistful title track presents a narrator tenaciously holding on to a past he (may or may not) be better off scrapping, and the deceptively charming “Dog’s Ass” draws on the dark memories of a family who’s livelihood was tightly hitched to the price of oil."

“My grandpa, my uncle, my dad, and his cousin all started a trucking company together in the ’80s, and they made good money working in the regional oilfield,” says Culwell. “The bulk of their money was made with a large oil company that was using my family’s little business to write off huge sums on their taxes, and when oil crashed, my folks were stuck holding the bag. They had to find a way to pay for their 18-wheelers, so they took to over-the-road driving, and my grandpa ended up having a stroke and getting into a head-on collision. There’s no chance I’ll ever believe that stroke wasn’t brought on by the greed and corruption of those oilmen.”

Despite its fascination with the dark underbelly of the American Dream, there remains an unshakable sense of promise on the album, an eternal spring of optimism that believes in better days to come. Songs like the gentle “Moon Hangs Down” and “Tie A Pillow To My Tree” began life as improvised lullabies for Culwell’s daughters, and it’s no surprise they hold the most beauty and wisdom of any tracks on the record.

“I’d write a single line one night, a few more a week later, and so on, until eventually we were singing the songs whole,” he explains. “Singing those tunes with my family is easily my greatest success in music. I hope those songs will still be useful to my girls someday when they’re old ladies and I’m gone. That’s all I’m after.”

In that sense, Culwell’s already achieved everything he could hope for with ‘The Last American.’ He’s crafted a collection that’s built to last, one that’s sturdy enough to weather the storms of today, and one that’s certain to be there for the brighter tomorrows still to come.