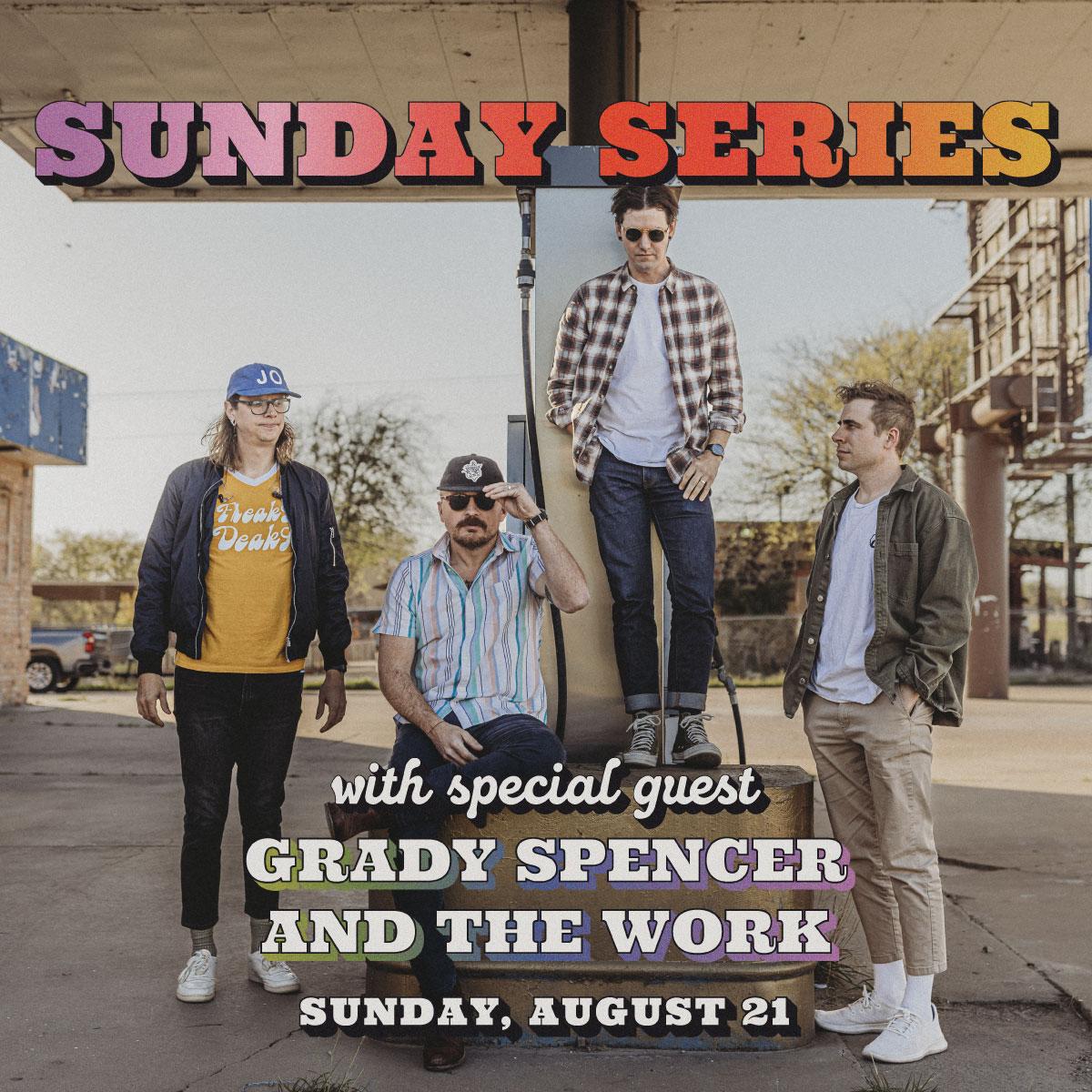 Join us for Grady Spencer and The Work to finish of our Sunday Series! The Work’s music reflects its members: honest, good-timing, with a nod to blue-collar roots.

General Admission: will have access to standing room in the general public section.

Born in Lubbock and raised in the country outside of a town called Paducah, Grady Spencer’s roots dig deep into Texas soil. By day, Spencer is a superintendent for a commercial construction company. By any other time, he’s songwriter and front-man of Grady Spencer & The Work.

The Work originally formed in 2013 on the stage of Paradox Church in Fort Worth, Texas. Drummer Blake Sager was joined by bassist Johnny Hatcher in 2016, followed by guitarist Tyler Martin in 2018. The

Work’s music reflects its members: honest, good-timing, with a nod to blue-collar roots.​

In 2013, the band recorded and self-produced its first album at 1916 Studios in Kyle, Texas. Sleep featured Spencer and Trevor Powell on guitar and vocals, Blake Atwell on guitar, Sager on drums, and

Josh Brandenburg on bass. The album was released that same year and was the band’s first introduction to the Fort Worth music scene. “Things to Do” was eventually picked up by the Fort Worth Visitors

Bureau via Tom Martens, and in 2017 the city sent Spencer and The Work to Niles City Sound to rerecord and release the track as a single.

Sophomore record The Line Between was primarily tracked at January Sound in Dallas, Texas. The band worked with Magnolia Records and released the album in 2016. Spencer’s vocals and guitar were once

again accompanied by Powell on guitar and Sager on drums, with Steve Moore on bass, producer Ryan Tharp on guitar, and Cody Culberson singing harmonies. This album carried the band beyond Fort

Worth city limits—a following started to crop up across the state and numbers rose on streaming platforms, catapulting The Work to their next album.​

Celebrate, The Work’s most recent album, was recorded with Niles City Sound in Fort Worth, Texas in 2018. This time Spencer was joined by Hatcher on bass and vocals, Martin and producer Austin Jenkins on guitar, and Sager on drums.

TIPS for the show

-- ARRIVE EARLY: The event is majority standing room throughout the facility, so come early and grab a spot!  Our restaurant will be open all day!

-- RAIN OR SHINE: The event is happening rain or shine.  We have misters and fans ready on our patio!

-- FOOD & BEVERAGE: Come early and order food, hand-crafted cocktails and local brews. Our full menu will be available for this event. Tables are first come first serve. Come early and take advantage of $5 frozens during Happy Hour from 3 - 6 PM!

-- PARKING: There is limited parking at The Rustic, be sure to leave early and give yourself plenty of time to park. Parking is free and first come, first serve.

-- RIDE SHARING is strongly suggested. Don't drink and drive!
-- ALL AGES are welcome for this event!