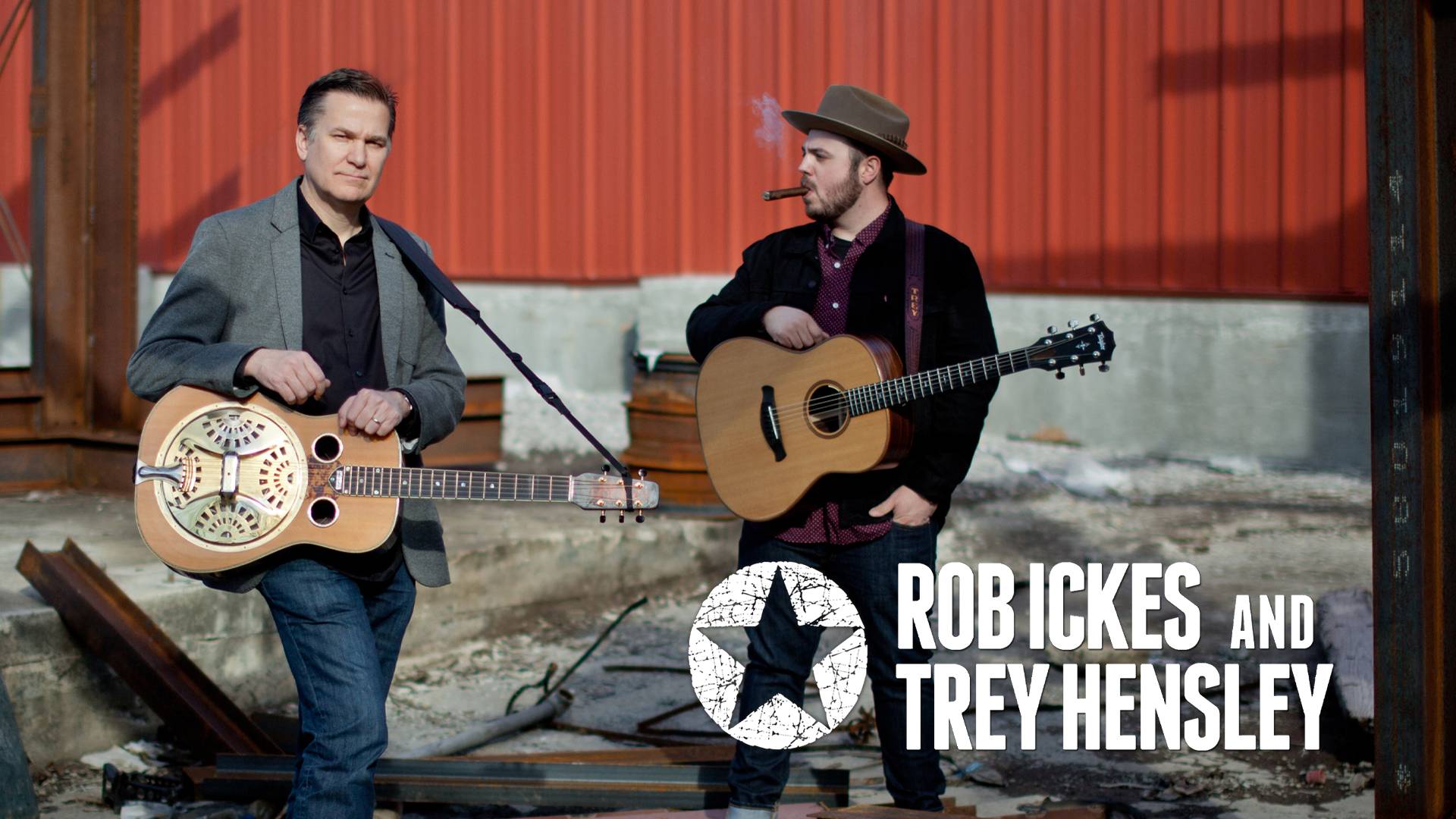 "If you love the sound of white-knuckle flat picking and barking squareneck resonator, you’ll flip overWorld Full of Blues…dueling like Afghan kite fighters, and backed by upright bass, drums, percussion, B-3, and horns, the two acoustic virtuosos work the intersecting lines of blues, bluegrass, and traditionalcountry while adding fresh moves of their own.” — Premier Guitar

Take a 15-time IBMA (International Bluegrass Music Association) Dobro Player of the year and aTennessee guitar prodigy who made his Opry debut at the age of 11 and you have Rob Ickes and TreyHensley, a GRAMMY-nominated powerhouse acoustic duo that has blown minds in the acoustic music scene.

Known for their white-hot picking and high-lonesome vocals, Ickes and Hensley meld together blues, bluegrass, country rock and other string band music of all kinds to form a signature blend of music that defies restrictions of genre. Ickes co-founded the group Blue Highway and has been a sought-after Nashville session player and live performing musician for decades, with credits to his name such as Vince Gill, Earl Scruggs, Merle Haggard, Alan Jackson, Reba McEntire and Alison Krauss. Hensley has been called “Nashville’s hottest young player” by Acoustic Guitar magazine and his soulful baritone vocals have received acclaim as well. Influenced by repertoires as diverse as The Allman Brothers Band, Ray Charles, Merle Haggard and Stevie Ray Vaughan, Hensley has shared stages with artists such as Johnny Cash, Steve Wariner, and Peter Frampton. As a duo, Ickes and Hensley have shared the stage and collaborated with Tommy Emmanuel, Taj Mahal, David Grisman, and Jorma Kaukonen & Hot Tuna — all enthusiastic admirers of the duo — as well as Luther Dickinson of North Mississippi All Stars, Molly Tuttle, and many more.

Ickes and Hensley have gained some added grit and a nod to the roots side of Americana aided by GRAMMY-winning producer Brent Maher on the duo’s third Compass Records album, WORLD FULL OF BLUES, (set to be released Oct. 4, 2019). Blues great Taj Mahal provides his unmistakable mojo to the title track and country music legend Vince Gill guests on an inspired rendition of cover of the Grateful Dead’s moonshiner song, “Brown-Eyed Women.” The project, which includes a range of songs that could be on a vintage Sun Records recording to Trey’s more traditional country originals, concludes with a smoking hot rendition of blues/rock guitarist Robben Ford’s “Rugged Road.”

Ickes and Hensley have performed in places as close to home as Nashville’s world famous Station Inn and as far away as Denmark’s Tonder Festival. They’ve played many prestigious music festivals, including Telluride Bluegrass, ELLNORA | The Guitar Festival, AmericanaFest, Rockygrass, ROMP, Wintergrass, Bluegrass Underground, Vancouver Island Music Festival, Guitar Town, Sisters Folk Festival, the Freshgrass Festival and several others. They will perform at the Hardly Strictly Bluegrass Festival with Buddy Miller in Oct. 2019 and set sail from Miami to St. Croix and Antigua on the Cayamo cruise alongside Brian Wilson, Jeff Tweedy, Mavis Staples, Rodney Crowell and others Feb. 2020. Several more tour dates are planned with Taj Mahal, their “World Full of Blues" collaborator, in 2020.

The duo were key players on “Original,” the recent highly lauded Compass album by bluegrass giant Bobby Osborne; their participation garnered a Recorded Event Of The Year Award for Bobby’s version of “Got To Get A Message To You” on that album at this year’s IBMA Awards; they also were on the 2016 Recorded Event winner, ”Fireball,” featuring Special Consensus, in 2016.