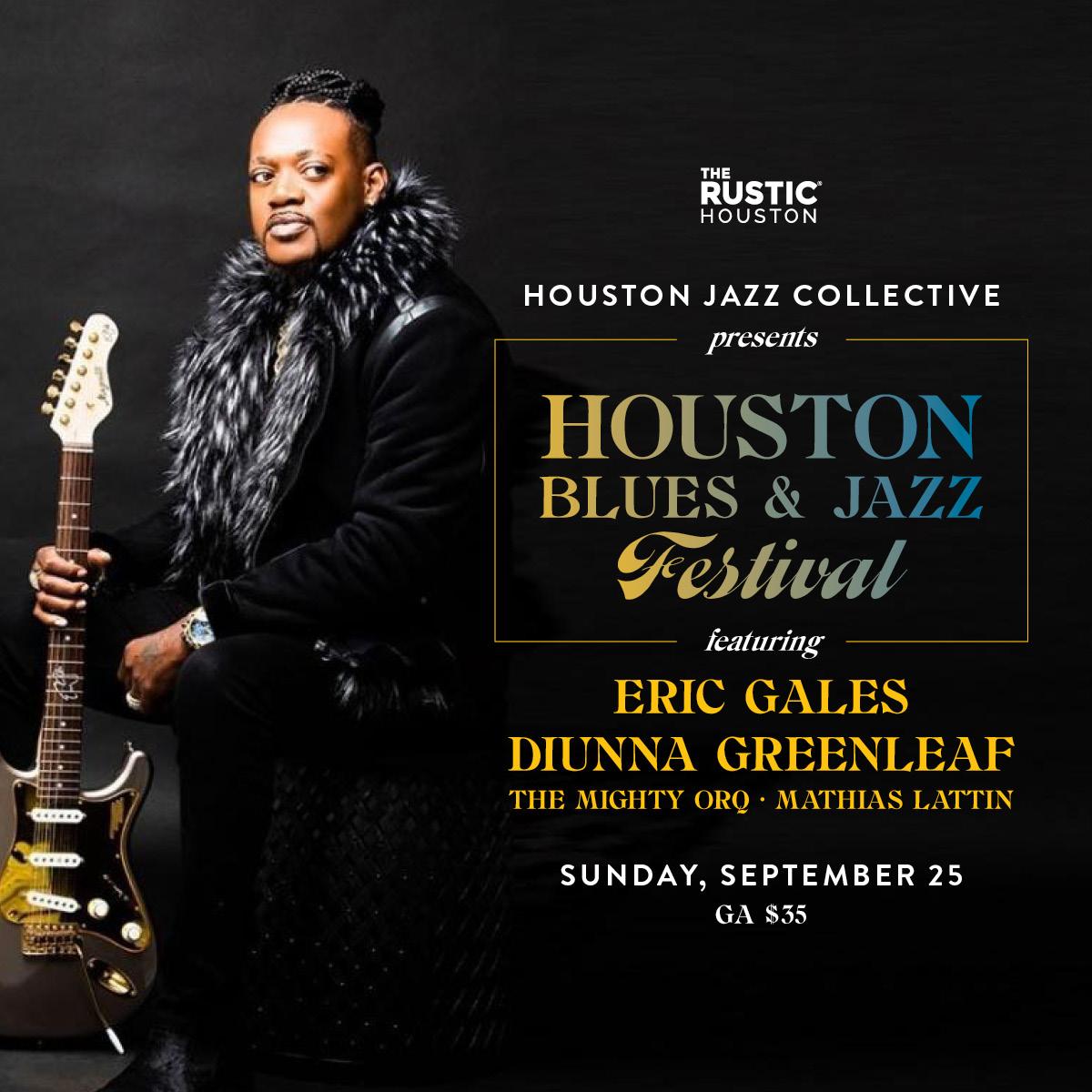 HOUSTON ─ Experience an evening of great entertainment at the Houston Blues and Jazz Fest!

As both an African-American left-handed guitarist of extraordinary ability and an expressive vocalist, it is natural for people to compare Eric Gales to Hendrix. But Gales has developed a unique hybrid blues/rock sound that also draws upon influences as diverse as Albert King and Frank Gambale. A unique amalgam of styles, Eric Gales stands head and shoulders among other guitarists in his genre.

Eric Gales grew up in a musical family with four brothers, two of them who learned to play the guitar upside down and left-handed in the same fashion that Eric does. He released his first record at 16 for Elektra records to an amazing response from the media and music fans around the globe. Multiple releases followed. His latest albumn, Crown, was released January 28, 2022 to rave reviews.

Diunna Greenleaf, the leader of Blue Mercy, is a native Texan (Houston) who has a background steeped in gospel music. Influenced by the likes of Koko Taylor, Aretha Franklin, Rosetta Thorpe, Sam Cooke, Charles Brown and her own parents Ben & Mary Ella Greenleaf (Gospel) she has developed "Diunna's style of Blues" in the same tradition as so many other great Texas blues men and women. She combines intricate patches of jazz, gospel and heartfelt soul to create a kind blues that takes one on an emotional roller coaster ride.

Diunna and her band Blue Mercy have performed throughout the United States and Internationally. She has performed at the Lugano Blues Festival and the Bern Jazz Festival, both in Switzerland, as well as the Cahors Blues Festival in France.

Diunna's commitment to Blues goes well beyond performing on stage. She served for three years as President of the Houston Blues Society, making history as the first woman ever elected to this position. During her presidency she used her professional guidance and grant writing skills to produce the Willie Mae Thornton Blues Festival, bringing in  such talent as “The Queen Of Blues” Mrs. Koko Taylor, Mr. Bernard Allison, Texas Johnny Brown, I.J. Gosey, Diane Price, Mel Waiters, Betty Lewis, Gary Clark, Jr., Jeremy And The

TIPS FOR THE SHOW
-- ARRIVE EARLY: This event is majority standing room only.
-- BRING CASH: we do accept credit cards at our main bars, but some pop-up bars & beer tubs in Pat's Backyard are cash only.
-- RAIN OR SHINE: This event will happen rain or shine. We have fans and misters ready on our patio!
-- TICKETING QUESTIONS? Contact PreKindle Online Ticketing at www.prekindle.com.
-- RIDE SHARING is strongly suggested!
-- PARKING: There is limited parking at The Rustic, be sure to leave early and give yourself plenty of time to park. Valet parking will be available at The Rustic for $10, free parking is also available at Avienda Central garage with a 3 hour limit.