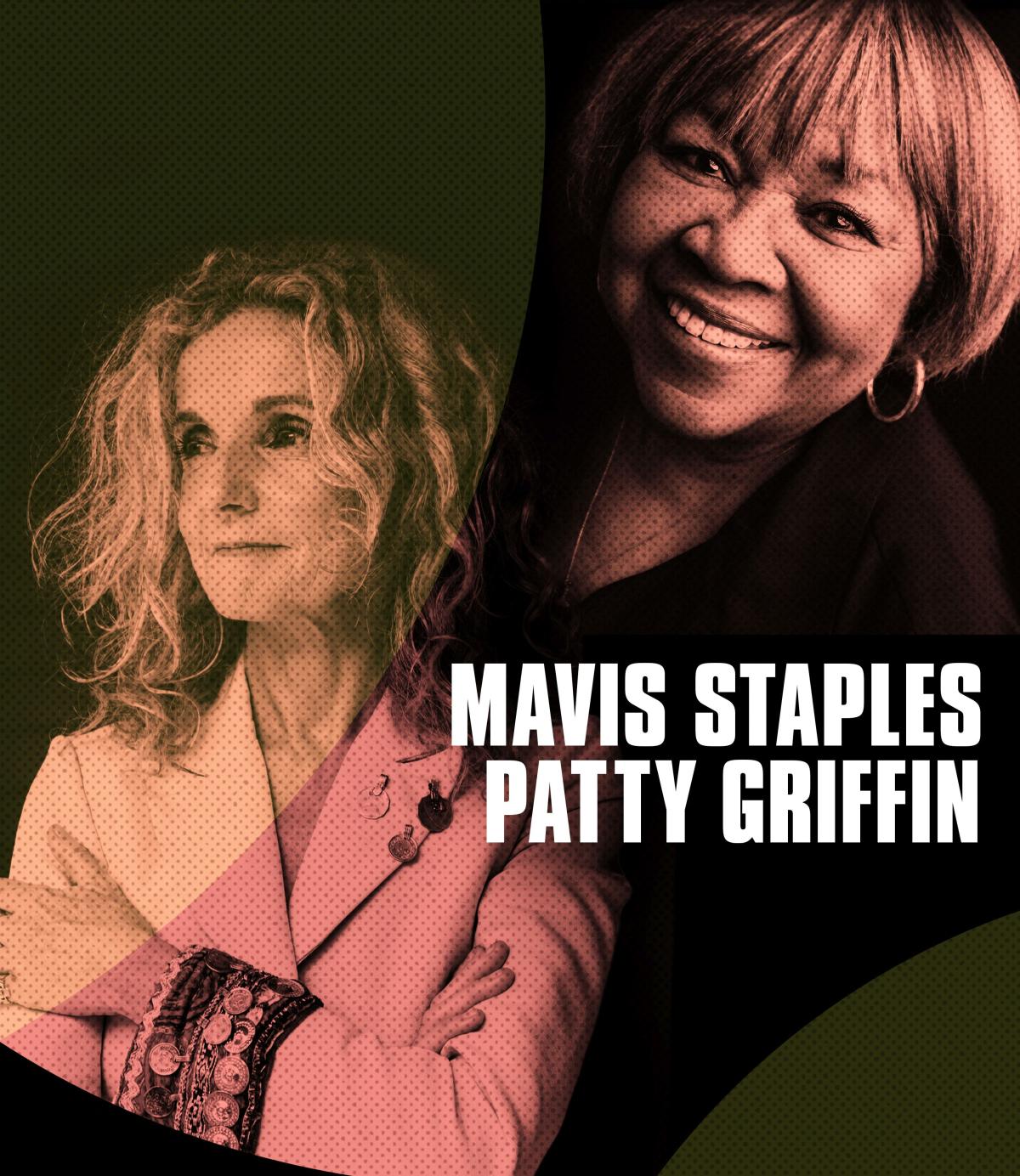 Patty Griffin is among the most consequential singer-songwriters of her generation, a quintessentially American artist whose wide-ranging canon incisively explores the intimate moments and universal emotions that bind us together. Over the course of two decades, the GRAMMY® Award winner – and seven-time nominee – has crafted nine classic studio albums and two live collections, a remarkable body of work in progress that prompted the New York Times to hail her for “[writing] cameo-carved songs that create complete emotional portraits of specific people…(her) songs have independent lives that continue in your head when the music ends.”

The Austin, TX-based singer and songwriter made an immediate impact with her 1996 debut, Living With Ghosts, and its 1998 follow-up, Flaming Red – both now considered seminal works of modern folk and Americana. Since then, Griffin’s diverse body of work spans such classic LPs as 2002’s GRAMMY® Award- nominated 1000 Kisses – later ranked #15 on Paste’s “The 50 Best Albums of the Decade (2000-2009),” — to 2007’s Children Running Through, honored by the Americana Music Association with two Americana Honors & Awards including “Artist of the Year” and “Album of the Year.” To date, Griffin has received seven total nominations from the Americana Music Association, affirming her as one of the far-reaching genre’s leading proponents. 2011’s Downtown Church – which blends traditional gospel favorites with Griffin’s own spiritually questioning material – debuted at #1 on both Billboard’s “Folk Albums” and “Christian Albums” charts before winning 2011’s “Best Traditional Gospel Album” GRAMMY® Award, Griffin’s first solo GRAMMY® triumph among seven total career nominations. Griffin’s most recent LP, 2015’s Servant Of Love, marked the first release on her own PGM Recordings label via Thirty Tigers. Applauded by The Guardian as “bravely experimental,” the collection saw Griffin earn still another GRAMMY® Award nomination, this time in the “Best Folk Album” category.

Widely regarded among the best pure songwriters of this or any other era, Griffin has had her work performed by a truly epic assortment of her fellow artists, among them Linda Ronstadt, Emmylou Harris, Solomon Burke, The Dixie Chicks, Kelly Clarkson & Jeff Beck, Martina McBride, Miranda Lambert, Melissa Etheridge and Susan Boyle, to name but a few. Her songs have also been showcased in a variety of film, TV, and theatre projects, with her original music and lyrics featured in the 2007 musical, 10 Million Miles, produced Off- Broadway by the Atlantic Theatre Company and directed by Tony Award-winner Michael Mayer. Griffin has also been joined in the studio by a veritable who’s-who of contemporary Americana, including Harris, Buddy & Julie Miller, Shawn Colvin, Jim Lauderdale, Raul Malo, Ian McLagen, JD Foster, and many others. As if her own remarkable career weren’t enough, Griffin has found time to collaborate with a wide range of like- minded artists, among them Joshua Radin, Todd Snider, Dierks Bentley, Robert Plant, Jack Ingram, Gillian Welch, and David Rawlings.

In addition to her creative career, Griffin has also devoted considerable energy and focus towards the wellbeing of the planet as well as showing compassion for the less fortunate among us via personal and public acts of charity including helping to create the Lampedusa tours supporting the Jesuit Refugee Service.

Having crafted a rich catalog that chronicles love and death, heartache and joy, connection and detachment, Patty Griffin continues to push her art forward, as always imbuing every effort with compassion and craft, uncanny perception, and ever-increasing ingenuity.

“I’m the messenger,” Mavis Staples says on the eve of her 80th birthday. “That’s my job -- it has been for my whole life -- and I can’t just give up while the struggle’s still alive. We’ve got more work to do, so I’m going to keep on getting stronger and keep on delivering my message every single day.”

That message -- a clarion call to love, to faith, to justice, to brotherhood, to joy -- lies at the heart of We Get By, Staples’ spectacular twelfth studio album and first full-length collaboration with multi-GRAMMY Award-winner Ben Harper. Backed by her longtime touring band, Staples breathes extraordinary life into Harper’s compositions on the record, delivering roof-raising performances with both a youthful vigor and a commanding maturity. The arrangements here are spare but weighty, matched by Harper’s suitably lean and thoughtful production, and Staples seizes the opportunity to showcase her remarkable and continued evolution as an artist, one still growing and exploring more than half a century into her storied career. We Get By is undoubtedly a timely collection, arriving such as it does in the face of deep social divisions and heightened political tensions, but like everything Staples touches, it’s also larger than any particular moment, a timeless appeal to the better angels of our nature that’s universal in its reach and unwavering in its assurance of better things to come.

“When I first started reading the lyrics Ben wrote for me, I said to myself, ‘My God, he’s saying everything that needs to be said right now,’” Staples remembers. “But the songs were also true to my journey and the stories I’ve been singing all my life. There’s a spirituality and an honesty to Ben’s writing that took me back to church.”

Hailed by NPR as “one of America’s defining voices of freedom and peace,” Staples is the kind of once-in-a-generation artist whose impact on music and culture would be difficult to overstate. She’s both a Blues and a Rock and Roll Hall of Famer; a civil rights icon; a GRAMMY Award-winner; a chart-topping soul/gospel/R&B pioneer; a National Arts Awards Lifetime Achievement recipient; and a Kennedy Center honoree. She marched with Dr. Martin Luther King, Jr., performed at John F. Kennedy’s inauguration, and sang in Barack Obama’s White House. She’s collaborated with everyone from Prince and Bob Dylan to Arcade Fire and Hozier, blown away countless festivalgoers from Newport Folk and Glastonbury to Lollapalooza and Bonnaroo, performed with The Band at The Last Waltz, and graced the airwaves on Fallon, Colbert, Ellen, Austin City Limits, Jools Holland, the GRAMMYs, and more. At a time when most artists begin to wind down, Staples ramped things up, releasing a trio of critically acclaimed albums in her 70’s with Wilco’s Jeff Tweedy that prompted Pitchfork to rave that “her voice has only gained texture and power over the years” and People to proclaim that she “provides the comfort of a higher power.” In between records with Tweedy, Staples teamed up with a slew of other younger artists -- Bon Iver’s Justin Vernon, Nick Cave, Valerie June, tUnE-yArDs, and M. Ward among others -- for Livin’ On A High Note, an album The Boston Globe called “stunningly fresh and cutting edge” and which first introduced her to Harper.

“Ben wrote a song for that album called “Love and Trust,’” explains Staples. “When he said he that he wanted to produce me, I told him, ‘Well shucks, if you write another song like that, count me in.’”

Harper did more than write just another song, instead penning an entire album of emotionally riveting and spiritually uplifting tracks that hit Staples directly in the heart. The tunes fit her like a glove -- due in no small part to the decades Harper spent listening to Staples’s music, both with The Staple Singers and as a solo artist -- and Staples found herself fighting back tears as she fell in love with the beauty and sincerity of those early stripped-down demos.

“I come from a family of Mavis fans,” explains Harper, “so her music has been woven into the fabric of my life from the very start. When I got the call for this gig, it felt like my entire career, everything I’d ever written, had been pre-production for this.”

Leading up to the recording sessions, Harper sat in the audience for several of Staples’ concerts, approaching her performances now as a student more than a fan. As brilliant as Staples’ studio output was over the years, Harper came to understand the stage as her home and her touring band as her family and capturing as much of that spirit as possible seemed like the obvious approach for We Get By.

“There’s so much soul and Muscle Shoals in that band,” explains Harper. “They’ve got a specific chemistry that I recognized instantly. When you have a guitar player like Rick Holmstrom, a bass player like Jeff Turmes, a drummer like Stephen Hodges, and a vocalist like Donny Gerrard all supporting the voice of the century, why would you ever want to go outside of that foundation?”

With Harper at the helm, the band recorded everything live at Henson Studio in Hollywood, CA, capturing the kind of powerhouse energy and deep pocket grooves that have come to define Staples’ legendary concerts. While Harper had a distinct vision for the sound of the record, he purposely kept his demos to skeletal sketches, leaving space for Mavis and the band to interpret and give flight to his songs in the inimitable way that only they could.

“The more I’ve produced over the years, the more I’ve heightened my sensitivity to what different artists require,” reflects Harper. “Every artist and every album is different. With Mavis, sometimes the most important thing you can do is press record and just get the hell out of the way.”

The record opens with the stirring “Change,” which finds Staples proclaiming, “Say it loud say it clear / Gotta change around here” over a simmering, fuzzed-out guitar line. It’s a song focused as much internally as it is externally, and after one listen, it’s plain to see why Staples and Harper referred to the studio’s vocal booth as the “prayer room.” Staples’ performance is hypnotic, holy even, restrained in its delivery but relentless in its urgency, and it lays the groundwork for an album that insists on joy and communal celebration without pulling any punches or sugarcoating any ugly truths. The funky “Anytime” looks fearlessly to the future, while the rousing “Brothers and Sisters” is a call for action in the face of injustice, and the gritty “Stronger” promises there’s no power in this world greater than our love for one another.

It’s impossible to listen to a voice like Staples’ without contemplating all she’s been through in her life -- the album cover features a heartrending Gordon Parks photo that speaks to the casual cruelty of racial segregation in 1950’s Alabama -- but it only serves to make her optimism and resilience that much more inspiring and contagious. There is darkness and doubt on the album to be sure (the spirit of Pops Staples informs the mournful “Heavy On My Mind,” which recognizes that some wounds never heal, while the poignant “Never Needed Anyone” stings with the pain of lingering regret) but it’s consistently overpowered by hope and conviction. “Been holding on too long to let go / Running too hard to slow down / Believing too deep to not have faith,” Staples confesses on the soulful “One More Change To Make.” In that sense, the album’s title is more than just an observation. When Staples and Harper join forces to sing “We Get By,” it’s a prayer, a promise, an invitation.

“I sing because I want to leave people feeling better than I found them,” Staples concludes. “I want them to walk away with a positive message in their hearts, feeling stronger than they felt before. I’m singing to myself for those same reasons, too.”

Even the messenger needs a reminder every now and then.