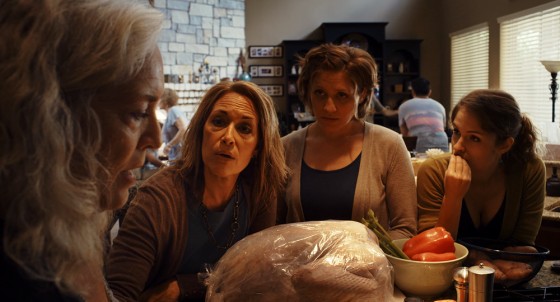 KRISHA
USA, 83 min.
KRISHADirected By: Trey Edward ShultsWritten By: Trey Edward Shults Produced By: Trey Edward Shults, Justin R. Chan, Chase Joliet, Wilson SmithStarring: Krisha Fairchild, Robyn Fairchild, Bill Wise, Trey Edward Shults, Chris Doubek, Olivia Grace Applegate, Alex Dobrenko, Chase Joliet Release Date: Q1 2016 Running Time: 83 minutes Rating: Not yet ratedWebsite: http://www.krishamovie.com/ Synopsis: Winner of both the Grand Jury and Audience Awards at the 2015 South-by-Southwest Film Festival, and official selection of Critics’ Week at the 2015 Cannes Film Festival, Krisha is the story of a woman’s return to the family she abandoned years before, set entirely over the course of one turbulent Thanksgiving. When Krisha shows up at her sister’s Texas home on Thanksgiving morning, her close and extended family greet her with a mixture of warmth and wariness. Almost immediately, a palpable unease permeates the air, one which only grows in force as Krisha gets to work cooking the turkey and trying to make up for lost time by catching up with her various relatives, chief among them her nephew, Trey. As Krisha's attempts at reconciliation become increasingly rebuffed, tension and suspicion reach their peak, with long-buried secrets and deep-seated resentments coming to the fore as everyone becomes immersed in an emotionally charged familial reckoning. A potent combination of innovative cinematic storytelling and timeless themes of love, family, and forgiveness, Krisha took the independent film community by storm upon its SXSW premiere, and it hasn’t slowed down since. Marked by complex tonal shifts (the film moves from dark humor to deep pathos to almost horror movie-like intensity), virtuosic camerawork reminiscent of Terence Malick (with whom Shults worked on multiple projects), and a propulsive score by Brian McOmber, Krisha proves definitively that Shults is the real deal. He is one of the most exciting and unique storytellers to emerge in a long time, and is remarkable in the way he embraces successful traditional techniques while managing to innovate new ones. Additionally, with a cast of largely nonprofessionals, many of whom were friends and family (his aunt Krisha plays the lead, and has received universal accolades for her performance) a 9 day shoot in his parents home, and a budget less than a studio film’s catering bill, Shults is a shining example of how personal, homegrown filmmaking can lead to an accomplished breakout feature.
Screenings
Angelika 3
Friday
10/16
7:00pm (CDT)
Director
Trey Edward Shults


Director Bio
Trey Edward Shults was born in Houston, Texas, in 1988. His first foray into the film industry was on Terrence Malick’s upcoming film, Voyage of Time. It was on that film where he worked in the camera department as a film loader. From there, he interned on Malick’s The Tree of Life, and then as the camera department production assistant on Untitled Terrence Malick Project. Shults’ short film, Krisha, premiered at SXSW in 2014 in the Narrative Shorts category, where it was award- ed Special Jury Recognition for Cinematography. Theshort film went on to play many other film festivals, including the HollyShorts Film Festival, where it won the award for Best Narrative Short. In the summer of 2014, he completed the feature version of Krisha.