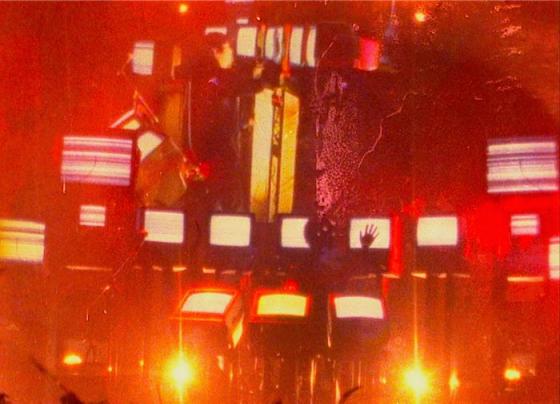 Relay
USA, 11 min.
An observational document of the visual environment created by artist Ei Wada (Sony Music, Japan). Wadasan re-wires Braun-tubed TVs to function similar to a theremin. Performing in the dark, he creates a unique audio/visual experience using broadcast signal and VHS cassette tapes with distorted image output to control frequency. Playing multiple televisions like a drum-set, he uses his own hands to control amplitude. I conducted an interview with Wadasan and filmed two performances; one in Germany, the other in Japan. Based on our conversations, I created this short piece that emphasized his grassroots approach to instrument making and reflected his own concepts about performance as art. This film was shot entirely on Super 8mm film, hand processed and transferred to DV with recorded sound performance in Osnebruck, Germany and Tokyo, Japan.
Screening with: Little Texas, Talkin’ that Mumbo Jumbo, For Carillon No 5, Witch Joanie, Broken Jam, The Burp Below, Go Fuck Yourself Oliver, How to Simplify and Organize, If I Could Talk,
Screenings
Angelika 8
Saturday
10/17
12:00pm (CDT)
Director
Mono No Aware


Director Bio
Steve Cossman is founder and director of Mono No Aware; a non-profit cinema arts organization whose annual event exhibits the work of contemporary artists who incorporate live film projections and altered light as part of a performance, sculpture or installation. In 2010 he helped the organization establish a series of analog filmmaking workshops that has grown to include an equipment rentals program, imported film stock distribution service and an in-person screening series entitled Connectivity Through Cinema. Steve’s first major work on film, TUSSLEMUSCLE, earned him Kodak’s Continued Excellence in Filmmaking award and has screened at many festivals and institutions internationally. In 2013, he completed residencies at MoMA PS1’s Expo 1 and the Liaison of Independent Filmmakers of Toronto. In 2014, Brooklyn Magazine named Steve Cossman one of the ‘Top 100 most Influential persons of Brooklyn Culture.’ He has been a visiting artist at Brown University, Dartmouth, the New York Academy of Art, Yale, SAIC, and UPenn. Steve’s recent work on film, W H I T E C A B B A G E (2011-2014), a collaboration with Jahiliyya Fields of L.I.E.S., had its U.S. premiere at Anthology Film Archives. He currently lives and works in Brooklyn as a director, curator, visual artist, educator and activist.