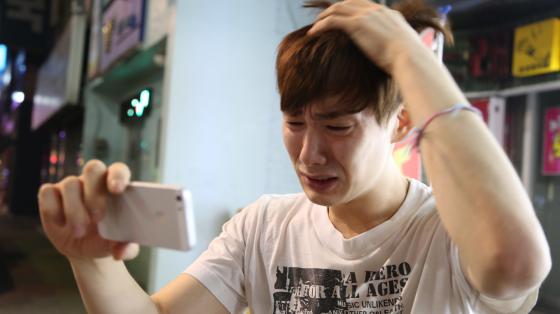 Big D Mobile Film Fest
90 min.
To Oh Seven
There are first time for everything. Even for the things you will never imagine…

Lily's Fairy World
A little girl sleeping in the street seeks refuge in the warmth of her dreams.

Drowning Memories
In a world where the water never stops rising, a man goes dicing through his memories

342 Iphone
An iphone video diary documenting the filmmaker's return to Toronto, moving houses, meeting friends, ending with a dance towards the future.

Sincerely, Us
Jen was already having a tough time. But when burglars break into her apartment and steal her dog, she'll do anything to get her best friend back --- even if it means messing with the space-time continuum.

Jungle Beast
Beasts of the jungle run wild in this stop-motion extravaganza! Made with a cell phone.

Hongje-dong
"The film was shot with a mobile phone At 2am, a couple talks on a video call. Girlfriend notices footsteps approaching her and she is in her house by herself. Someone gets closer and closer to her house and finally breaks in. Her boyfriend immediately gets in a taxi and heads to her house. However all he has is a phone in his hand and there is nothing he can do at the moment."

How to Rob a House
"Two thieves get a tip on a house that they can't pass up. But they get confused on the details and when they arrive for the job, the homeowner is there. Even their plan to get out of the house fails and they are left to the mercy of the mysterious homeowner."
Screening with: How to Rob a House, SECTOR ZERO4, Hongje-dong, Jungle Beast, Sincerely, Us, 342 Iphone, Luciérnagas, Drowning Memories, Invisible...looking for Tarkovsky, Lily's Fairy World , The Watch,
Screenings
Angelika 7
Saturday
10/17
12:00pm (CDT)