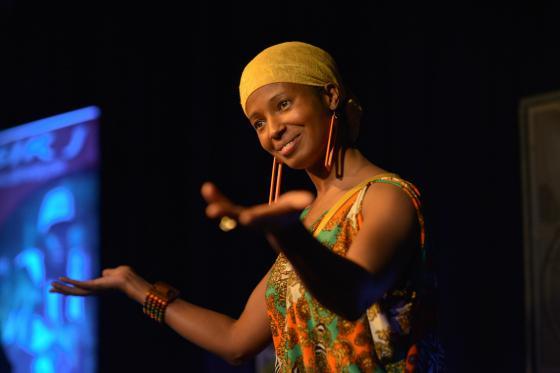 Poetry Get Down and Slam
120 min.
JOIN US AT ONE OF OUR MOST CELEBRATED EVENTS SINCE 2015! Whether you are a Virgin to the Mic or a Veteran looking to build your Rep, This Open Mic set followed by a Fierce Poetry Slam has it all. Fans will get to experience National level Poets along with the best Emerging Talent in North Texas. Hosted by Chicago Born Poet, Verb Kulture featured on TV One Verses and Flow. SIGN UP TO COMPETE FOR PRIZES: 1ST PLACE -$500 2ND PLACE -$250 3RD PLACE- $150 ENTRY FEE: $25 SIGN UP NOW - ONLY SPACE FOR 12 PARTICIPANTS CONTACT: FREDERICK NICHELSON - nichelsonent@gmail.com
Screenings
Patterson- Appleton Art Center
Saturday
1/25
9:00pm (CDT)
Featuring
Verb Kulture

Verb Kulture
Verb Kulture "VERB" is a perfect word to describe her. She is poetry in motion. Verb was born and raised on the Southside of Chicago. Upon moving to Dallas, TX in 2008, her artistic career launched. She is a performing artist who possesses many talents including : Spoken Word Artist, Slam Champion, Dancer, Musician, Producer, Writer, Host, Motivational Speaker and so much more. Verb has a gift for bringing people together and reaching an audience. On the stage, her dynamic performances never cease to grab your attention and speak to your heart. As founder and CEO of Verb Kulture Entertainment, Verb is currently the producer of some of the biggest shows in the Dallas/Fort Worth area including the Annual Changing Faces Masquerade Ball and the Annual Harlem Renaissance Extravaganza. On the national stage, Verb has performed with numerous Grammy Award winning artists and was featured on season 3 of TV One’s "Verses and Flow" show where she shared the stage with Mary Mary and Vivian Green. To keep up with this renaissance woman and all of the great works she is creating, follow her on Facebook, Twitter, and Instagram @verbkulture.