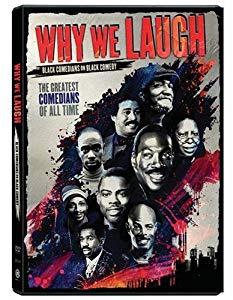 Why We Laugh: Black Comedians on Black Comedy
United States, 95 min., Black & White and Color, English
Historical retrospective chronicles African-American comedy from the Minstrel Era of slavery and beyond, to the chitlin circuit, race films, the 1970s Black sitcom boom and up to the modern age. Dozens of comedians, social commentators and politicians contributed their time and knowledge to craft this important piece of Black history. Older audience members will be transported to the days of Dick Gregory, Moms Mabley, Sanford and Son, Richard Pryor and Eddie Murphy. While younger viewers will discover the impact and significance of Dave Chappelle, Chris Rock and Whoopi Goldberg. Screens as part of a conversation with Daryl Littleton who is the author of the book Black Comedians on Black Comedy: How African-Americans Taught Us to Laugh upon which the film is based.
Screening with: "Why We Laugh": Free Event,
Screenings
NCTC Denton Lecture Hall #212
Friday
1/24
3:00pm (CDT)
Director
Robert Townsend
Author
Daryl Littleton


Director Bio
Robert Townsend is an American actor, director, comedian, and writer. Townsend is best known for directing the films Hollywood Shuffle, Eddie Murphy Raw, The Meteor Man, The Five Heartbeats and various other films and stand-up specials. He is especially known for his eponymous self-titled character, Robert Peterson as the starring role as on The WB sitcom The Parent 'Hood, a series which he created and of which directed select episodes. Townsend is also known for his role as Donald "Duck" Matthews in his 1991 film The Five Heartbeats. He later wrote, directed and produced Making The Five Heartbeats, a documentary film about the production process and behind the scenes insight into creating the film. Townsend is also known for his production company Townsend Entertainment which has produced films Playin' for Love, In the Hive and more. During the 1980s and early–1990s, Townsend gained national exposure through his stand-up comedy routines and appearances on The Tonight Show Starring Johnny Carson. Townsend has worked with talent including Halle Berry, Morgan Freeman, Chris Tucker, Beyoncé, Denzel Washington and many more.
Daryl Littleton
Darryl Littleton began his professional comedy career writing sketches for “The Tom Joyner Morning Show” on CBS Radio where he created the comedy persona, “D’Militant”. Soon afterwards he became a regular at the world famous Comedy Store and landed a job as D. L. Hughley’s exclusive writer during his tenure as host of BET’s Comic View. Darryl was promoted to writer/producer and penned material for Cedric the Entertainer, Sommore and Don DC Curry. Littleton has appeared on Martin Lawrence’s 1st Amendment, Mo’Nique, Def Comedy Jam, Loco Comedy Jam, The Parent Hood, Townsend Television, Unsung Hollywood: The Jeffersons, Showtime at the Apollo, BET’s Comic View, Uptown Comedy Club, Unsung Hollywood: Wayne Brady, Byron Allen’s Comic’s Unleashed and ABC’s America’s Funniest People where he was the Grand Prize Winner. Littleton’s film credits include, Diamond Dawgs and All Lies on Me. For years Darryl Littleton toured Europe and Asia as a stand-up comedian entertaining US military troops. Upon his return he released his comedy CD, Am I Lying?!, won the prestigious Bay Area Black Comedy Competition on its 20th Anniversary, worked as a commentator for NPR and published his first book, Black Comedians on Black Comedy, is taught at USC and was adapted into the Robert Townsend directed documentary, Why We Laugh where Darryl served as executive producer. Littleton co-hosted the podcast “Tuezdae’s with D’Militant”, toured as a public speaker, produced Black & Blue: The Laff Records Collection and dropped his sophomore album Too Raw for Mainstream along with publishing six additional books: How to Be Funny: The Essential Comedy Handbook; Forefathers, Pimp Down; Comediennes: Laugh Be a Lady; Black Revenge, How To Do Stand-Up Comedy: Preserving a Dying Art Form and the satirical graphic novel, “1 Broke Activist: The Adventures of D’Militant - Mein Trump”. Darryl Littleton is a Curator for the Comedy Hall of Fame and an Emmy nominated writer for his work on the documentary, Joan Rivers: Exit Laughing. He is the VP of Talent Acquisitions for the International Cable Broadcast Station, Humor Mill-TV and in the Fall of 2019 his eagerly anticipated, This Day In Comedy: The Ethnic Encyclopedia of Laughter will be released.