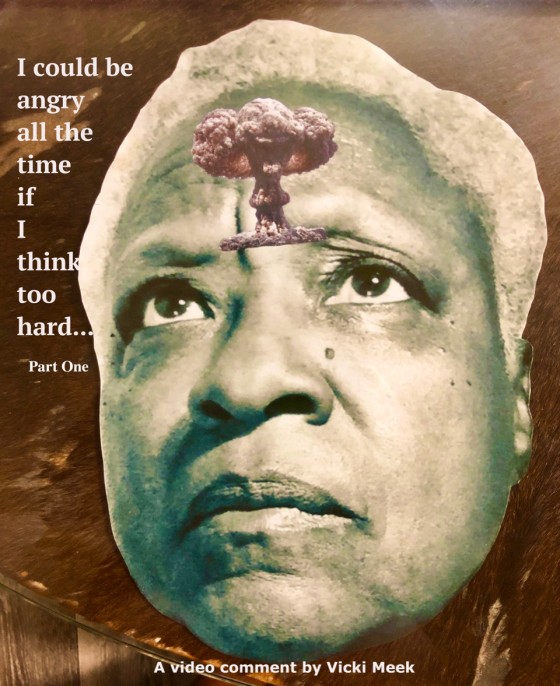 Artist Talk with Vicki Meek
United States, 2020, 60 min., English
Artist talk followed by a Q & A with Vicki Meek, Creator of Digital Art Exhibit “I could be angry all of the time if I think too hard...Part 1. The digital video will be on display on January 23,2020 during venue hours at UNT on the Square; NCTC – Denton: On January 24-25, 2020 at the Campus Theater; UNT on the Square; NCTC – Denton: DBFF Interactive Expo @ Denton Convention Center – Embassy Suites and on Sunday, January 26, 2020 at the Campus Theater
Screenings
UNT on the Square
Thursday
1/23
1:00pm (CDT)
NCTC- FSB Exchange -Lobby
Thursday
1/23
3:00pm (CDT)
Featuring
Vicki Meek

Vicki Meek
Vicki Meek, born and raised in Philadelphia, Pennsylvania, is a nationally recognized artist who has exhibited widely. Meek is in the permanent collections of the African American Museum in Dallas, The Museum of Fine Arts in Houston, and Norwalk Community College in Norwalk, Connecticut. She was awarded three public arts commissions with the Dallas Area Rapid Transit Art Program and was co-artist on the largest public art project in Dallas, the Dallas Convention Center Public Art Project. Meek was selected as one of ten national artists to celebrate the 10th Anniversary of the Nasher Sculpture Center with the commissioning of a site-specific installation. Meek’s retrospective “Vicki Meek: 3 Decades of Social Commentary” currently on exhibit at Houston Museum of African American Culture, marks the end of her installation practice as she moves into creating work using video as the primary medium. She dubs these new works as video comments since they are no more than 5 minutes in length and will be done in a series format. Meek’s been awarded a number of grants and honors including National Endowment for the Arts NFRIG Grant, Dallas Observer MasterMind Award, Dallas Museum of Art Otis and Velma Davis Dozier Travel Grant, Texas Black Filmmakers Mission Award, Women of Visionary Influence Mentor Award, Dallas Women’s Foundation Maura Award, Nominated for the Louis Comfort Tiffany Foundation Award and the African American Museum at Dallas A. Maceo Smith Award for Cultural Achievement. In addition to having a studio practice, Vicki Meek is an independent curator and writes cultural criticism for Dallas Weekly with her blog Art & Racenotes (http://artracenotes.blogspot.com) and also wrote a monthly column, ARTiculate for TheaterJones, an online performing arts magazine which will launch as a podcast on DallasWeekly.com in 2020. Meek is also an adjunct faculty member for UMass Arts Extension Program in Amherst, Massachusetts where she teaches a course in Cultural Equity in the Arts. With over 40+ years of arts administrative experience that includes working as a senior program administrator for a state arts agency, a local arts agency and running a non-profit visual arts center, after 20 years, Vicki Meek retired in March 2016 as the Manager of the South Dallas Cultural Center in Dallas. She served on the board of National Performance Network/Visual Artists Network 2008-15 and was Chair from 2012-2014. In 2016, Meek was selected to be a Fellow in the Intercultural Leadership Institute and also became a Voting Member of Alternate Roots, a national artist service organization. Vicki Meek currently also spends time in Costa Rica where she is Chief Operating Officer and Board Member of USEKRA: Center for Creative Investigation, a non-profit retreat for creatives in a wide range of disciplines founded by internationally acclaimed performance artist Elia Arce. She is also Mayor Eric Johnson’s at-large appointment to the Arts and Culture Commission and the Public Art Committee and President of Friends of the South Dallas Cultural Center.