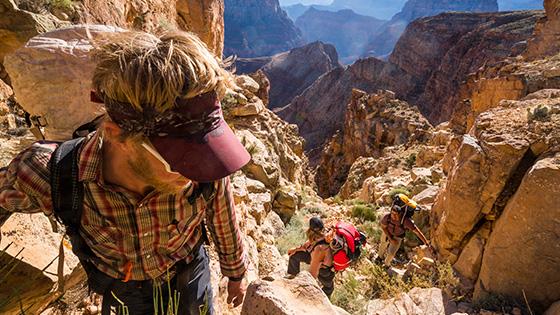 PLAY TRAILER
Into the Canyon
USA, 2019, 85 min.
When photojournalist Pete Mcbride and author Kevin Fedarko set out to hike the entire length of the Grand Canyon — a grueling 750-mile transect through some of the country’s most unforgiving terrain — they learn the hard way why only a handful of humans have pulled off the feat. It’s a tremendous challenge that entails oppressive heat, dizzying exposure and incredible physical stamina. But the trek allows them to take on a more important mission: documenting the threats that surround one of America’s most iconic national parks. In Into the Canyon, the duo venture into the fragile and otherworldly landscape, examining what’s at risk to be lost to uranium mining, large-scale development, growing helicopter traffic and more. Along the way, they battle the heat, scramble through exposed cliffs, get snowed on, nearly die once or twice and gain intimate knowledge of the canyon’s singular, magnetic, life-changing draw.


Director Bio
Native Coloradan Pete McBride has spent two decades studying the world with a camera. The self-taught photographer, filmmaker, writer and public speaker has worked in more than 75 countries for publications such as Smithsonian, National Geographic, Outside and Esquire. In recent years he has focused on the plight of Western rivers.
Screenings Co-presented by:
TCU Institute of Environmental Studies, Rainforest Trust