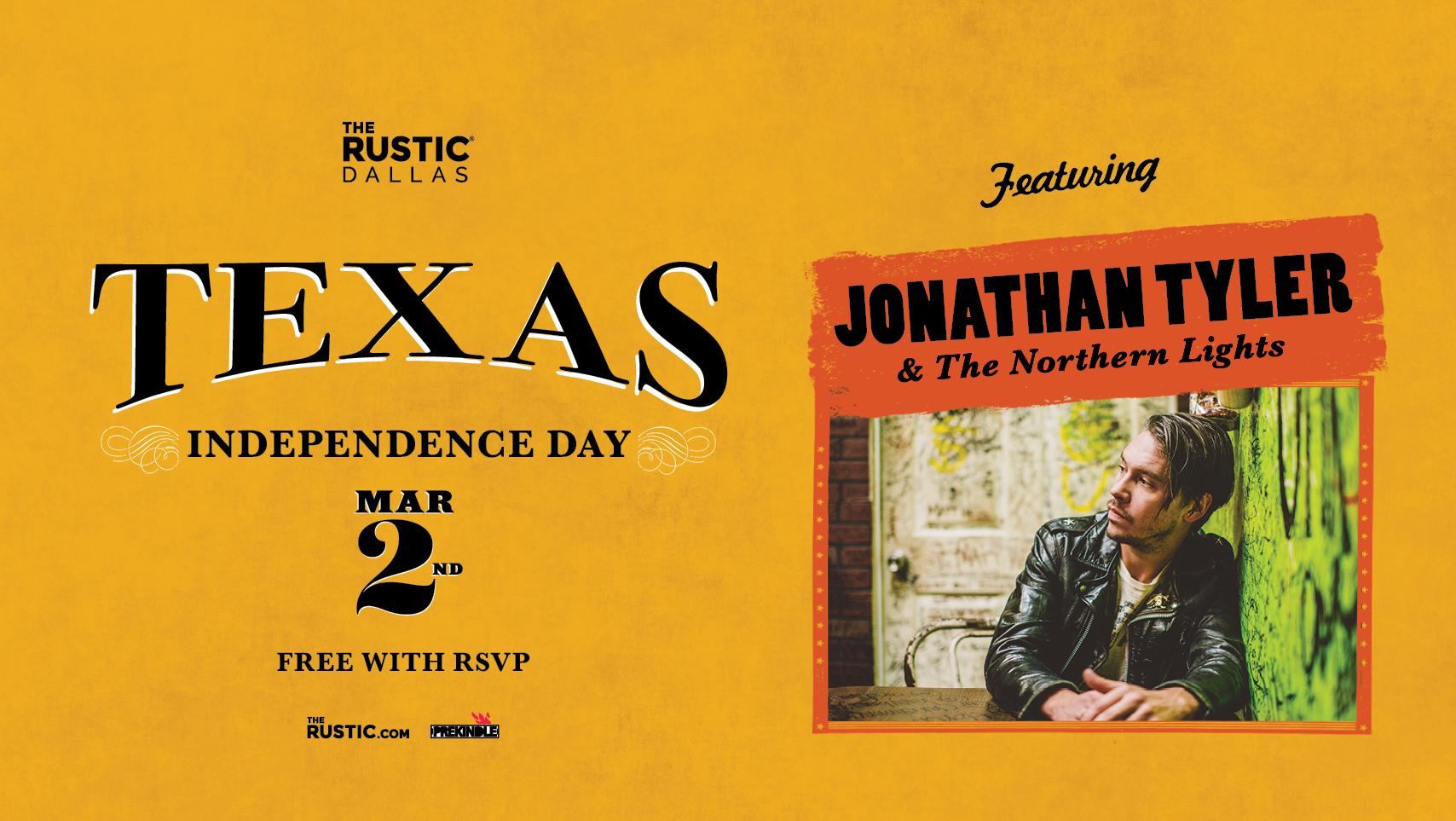 Come out to The Rustic to honor our Lone Star State and celebrate Texas Independence with free live music by Jonathan Tyler & The Northern Lights!

About Jonathan Tyler & The Northern Lights:
Hailing from Dallas, Texas, Jonathan Tyler & The Northern Lights first began to take shape when childhood friends Jonathan and Kansas began playing guitar in their teens. With shared common influences ranging from the Rolling Stones, Led Zepplin and Jimi Henrix to Bob Dylan, The Band and Muddy Waters; the two were compelled to write and play together. From the start it was JT on vocals, playing a mean, bluesy lead guitar, with Kansas on rythym adding a harder rock edge, a combo that was instantly right. Several years and incarnations later, they were joined by musical prodigy Nick Jay on bass and a hard-hitting drummer from Oklahoma named Jordan Cain. The core of the band was at last in place and the sound began to gel.

After being together for less than a month, the four piece went into the studio to record HOT TROTTIN’ - a raucous and enjoyable journey from start to finish. Produced by Jonathan and engineered by Chris Bell, who’s work with Erykah Badu, The Polyphonic Spree and The Eagles had made an impression on the band. Tracks include “Gypsy Woman,” A rock jam lamenting over a girl that keeps appearing and disappearing carelessly. “She's From The Other Side,” a blues influenced tune about the dangerous women of the world. “Time For Love,” an upbeat ballad that talks about coming together under the umbrella of Love and “Sunshine,” a waltz written about the feelings a past relationship evoked. It’s a stunning first effort for any band, particularly for a group of guys that had been playing together for just three short weeks.

With their album in hand they hit the road. The live show continued to evolve when Mo Brown joined the band a few months later. Brown’s spine-tingling vocals were a force that JT wanted not just in the background, but as a staple in their live show out front. With the recent addition of Cain’s wife Bethany on harmony vocals and keyboard player Beau Bedford, the bands has filled out their sound and completed the puzzle. Finally, the chemistry is right. Night after night, they deliver a wall of sound with a groove so undeniable, it makes fans rise to their feet and stand at attention. The band is tight and Jonathan’s raw energy coupled with blazing guitar work and rugged vocals has heads turning.

TIPS for the show:
-- COME HUNGRY: We’ll have our full menu available all day!
-- ARRIVE EARLY: This event is a combination of standing room and limited seating. Please note for all RSVP’s: all seating is first come, first served and based on availability.
-- BRING CASH: we do accept credit cards at our main bars, but most pop up bars & beer tubs in Pat's Backyard are cash only.
-- RAIN OR SHINE
-- TICKETING QUESTIONS? Contact Prekindle Online Ticketing at www.prekindle.com.
-- PARKING: There is limited parking at The Rustic.
-- RIDE SHARING is strongly suggested. Don't drink and drive