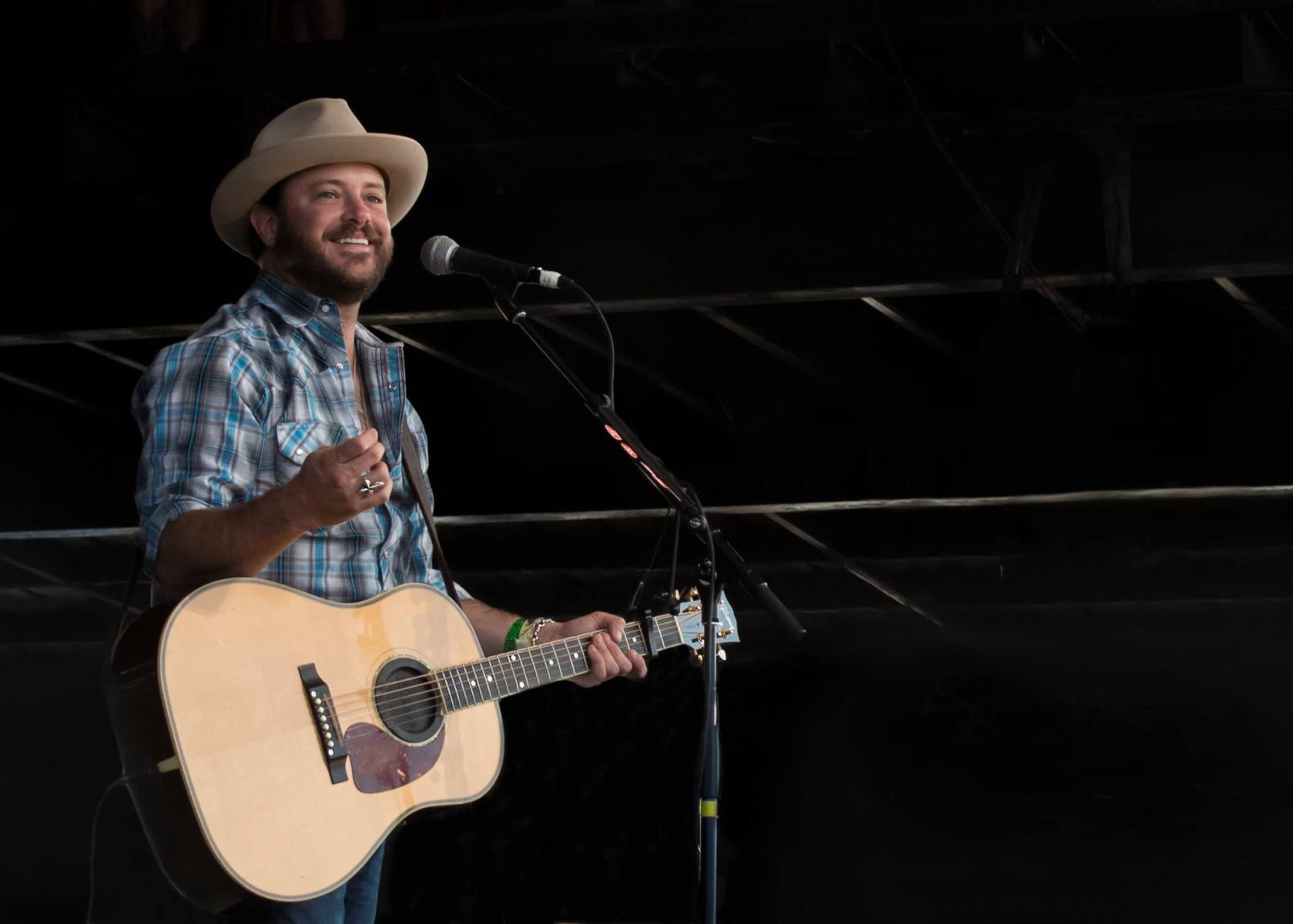 Wade Bowen is an American Texas Country/Red Dirt singer from Waco, Texas. He was a member of the band, West 84, with friend Matt Miller, before the band was re-aligned 2001. He released his first album in 2002, Try Not To Listen, which became a regional hit in Texas. He released his first live album 2003 and another studio album in 2006. In 2008 he released If We Ever Make It Home, his biggest success to date. On November 21, 2009 Wade Bowen recorded his second live album at the famous Billy Bob's Texas in Fort Worth, Texas. The album was released on April 27, 2010 as a CD/DVD combo. He is the brother-in-law of Cross Canadian Ragweed frontman, Cody Canada.

If it’s true what they say, that parenthood teaches some of the most profound lessons in patience and humility, this could partly explain the professional maturation that singer-songwriter Wade Bowen has experienced over the last couple of years. Settled nicely into his new role of father and family man, Wade Bowen has learned that both in the music process and in life, it’s hard to rush a good thing. Thankfully while recording his February 2006 release, Lost Hotel, Wade Bowen had time to push a step further and truly come into his own, resulting in his most depth-reaching, acclaimed effort yet.

Today, he’s already a familiar and awarded name in music, performing along the active touring highways of Texas and the Southwest and selling out top venues like the legendary Gruene Hall in New Braunfels. Carving out a dedicated fan base with his magnetic appeal and proven abilities, Wade Bowen has enjoyed a 7 year stint as a leader amongst a flourishing Americana and Alt-Country music community. From the numerous successes of his February 2006 release, Lost Hotel, to his recent tour with Lee Ann Womack and Friends, Wade Bowen shows absolutely no sign of slowing down.

The most recent on his growing list of musical accolades, the single off Lost Hotel, “God Bless This Town”, charted at #1 on the Texas Music Chart and was voted the # 4 Song of the Year on both the Texas Regional Radio Report and the Texas Music Chart’s Top 30 Songs of 2006, landing just below Pat Green, Jack Ingram, and Randy Rogers on both respective charts. Plus, consider that Bowen is impressively the only artist in that ranking without the support of a major label. The video for “God Bless This Town” debuted on the Top 20 countdown on CMT and stayed in the #1 spot for several weeks on CMT’s Pure Country 12 Pack Countdown, in the company of pinnacle artists like Alan Jackson and Brad Paisley.

Back in 2000, hardworking Bowen whetted his musical appetite and sharpened his abilities via various bar room and backyard BBQ gigs while he simultaneously pursued and obtained a degree in public relations from Texas Tech University. Soon, Bowen helped establish West 84, the initial grouping that toured throughout Texas in the wake of the young songwriter’s quality originals and captivating vocal abilities. The magnetic singer-songwriter was naturally spurred to center spotlight and eventually the name West 84 was retired for the more apt, Wade Bowen. The soon to be out of print debut, Just For Fun, revealed a burgeoning uniqueness that put Wade Bowen on the map and on the road full time, hashing out his style while delving full force into the musical process.

The 2002 follow up, Try Not To Listen, propelled Bowen to new heights as he continued to refine his songwriting and live performance. The title track single reached #8 on the Texas Music Chart, in addition to being named the chart’s #26 Song of 2002. The intensifying energy both onstage and in the audience ushered in Wade Bowen’s first live effort in 2003, The Blue Light Live, which parked on the LoneStarMusic.com Top 25 best-sellers list for an impressive 2 and a half years, most of that spent in the Top Ten list. The Blue Light Live won 2004 Album of the Year honors from MyTexasMusic.com, was nominated for Live Album of the Year by GruenewithEnvy.com, and spotlighted Bowen as the 2004 Male Vocalist of the Year by MyTexasMusic.com as well.

With musical influences that cite everyone from Aerosmith to Patty Griffin to Led Zeppelin and Paul Thorn, the result of Wade Bowen’s incessant touring is something akin to a smooth shot of roots rock with an alt-country back, served on ice with doses of traditional country and sensitive blues, but with a fiery edge, too. A blend made all its own while not overwhelming the music pallet, Bowen is passionate about being a genre-crossing artist, learning from a variety of musical styles.

Bowen’s influences have melded to form a well-rounded songwriter, familiar with shaping melodies to evoke emotion, and boosted by a layered vocal intensity that shines. His writing skills have garnered a stash of notable songwriting credits and co-writes, including the widespread acclaim earned for his co-write with Pat Green on “Don’t Break My Heart Again,” the lead single for Green’s Top 10 release, Lucky Ones. Wade Bowen has written with the likes of Ray Wylie Hubbard, who also made a cameo appearance in Bowen’s video for the single “God Bless This Town.” Bowen and his brother in law, aka Cross Canadian Ragweed front man Cody Canada, penned “When It All Goes Down” together, which was released on Cross Canadian Ragweed’s Garage album.

On Lost Hotel, Wade Bowen again teamed up with J.R. Rodriguez, producer of The Blue Light Live, and headed to Nashville with a new lot of original songs and co-writes with peers like Randy Rogers, Brandon Rhyder, and Bleu Edmondson. Almost four years since his last studio album, Lost Hotel was released on Sustain Records in 2006 and was the first opportunity Bowen had in the studio where he felt free from the typical time and studio challenges. Giving Bowen ample time to examine old wounds and dig deeper in his songwriting, the album reflects themes of struggle and loss as well as hopeful perseverance and new beginnings.

If the record reveals transitional themes, it’s rightly so, as these days Bowen and wife Shelby have made New Braunfels home to them and their first born, Bruce (tellingly after the Springsteen variety and not Willis, though Die Hard would also be an apt description of the Bowen family’s dedication to the craft of music.) Enjoying a continuously growing horizon, Bowen and cohorts are stretching their legs across the nation, touring regularly in the Midwest and Southeast, in addition to heavy performing spanning the Southwest.

Paralleling his personal maturation as a father, Wade Bowen has ascended to a new level as an artist, a player, and a writer in the wake of Lost Hotel. With a personality that has been described as unabashedly straightforward and honest, his raw approach simply transcends to his craft and makes audiences feel more like friends, lucky enough to witness the next gifted performer as he rises out of Texas. Hence, Bowen’s journey on Lost Hotel truly parallels his real life musical process, where guts and faith are everything and a patient struggle culminates in triumph. Well-oiled, primed, and ready to surpass an already impressive tally of accomplishments, Bowen is anxious to get back into the studio with his brand new material, expected for release later this year.

As for humility, well, despite his high ranking within the Southwest’s lively Americana music community, Wade Bowen says things like this and means it: “I may be crazy, but it's hard for me to believe that I have fans that honestly care enough to listen to my music….It shocks me every day.” Some would say that even parenthood can’t teach that level of humility, not to one of today’s most promising and poignant singer-songwriter talents, Wade Bowen.