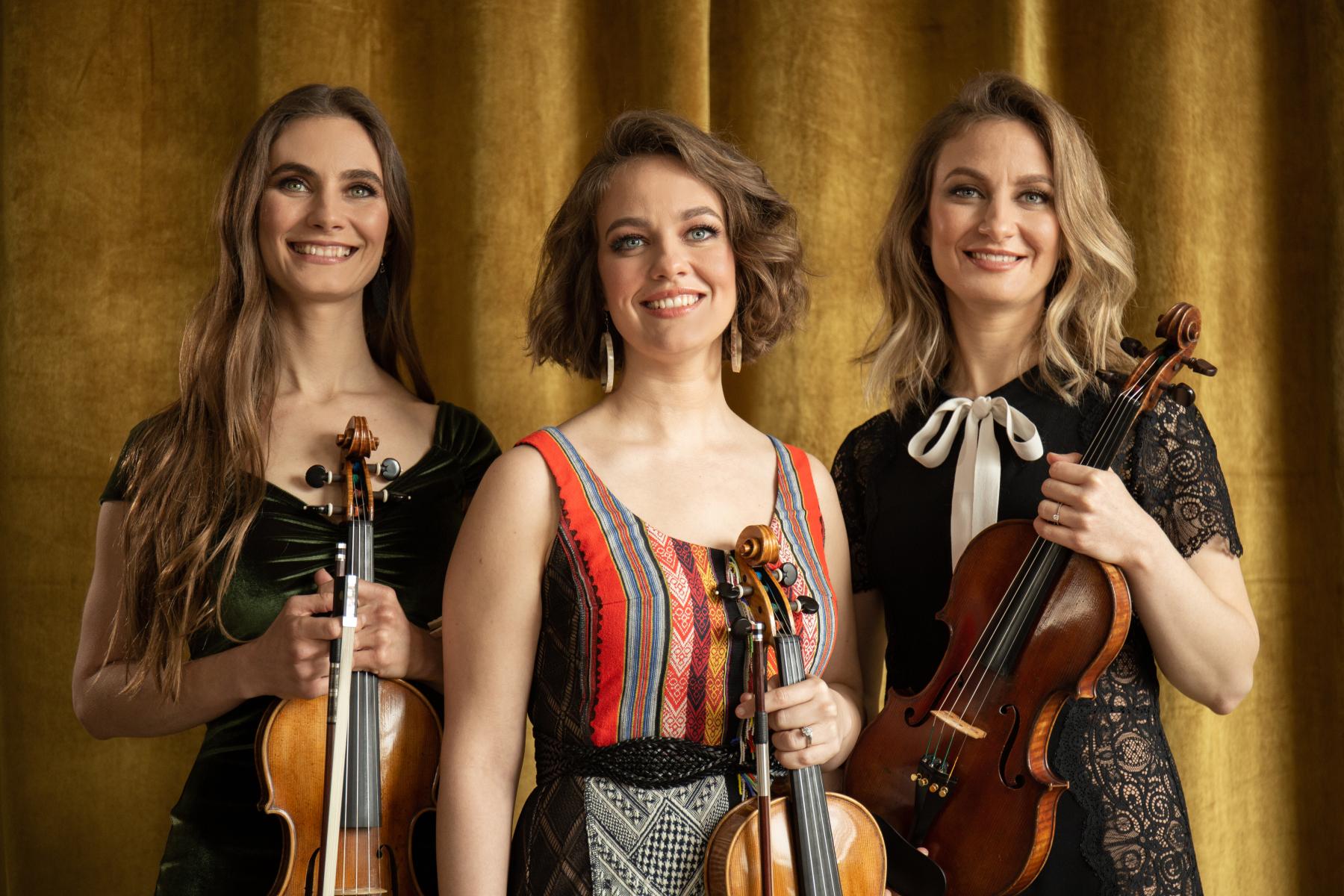 $26.00 to $304.00 Share
Buy Tickets
The Quebe Sisters
With over fifteen years of touring to date, The Quebe Sisters have delivered their
authentic triple fiddle and three-part harmony sound to the concert halls and festivals
of North America and Europe.
Grace, Sophia, and Hulda Quebe front an innovative Progressive Western Swing band
of archtop guitar, upright bass, fiddles and sibling harmony. The Dallas-based five-piece
presents a unique Americana blend of Western Swing, Jazz-influenced Swing, Country,
Texas-Style Fiddling, and Western music.
“We differentiate our music as ‘Progressive Western Swing’ from simply ‘Western Swing’
because we aren’t trying to sound just like Bob Wills,” Grace Quebe explains.
“Instead, we continue his vision, playing the style he pioneered in an authentic way by
incorporating new genres and songs, interpreting them using our own unique voice
through Country instrumentation.”
The band’s stripped-down acoustic instrumentation breathes new life into seasoned sounds
once found in Texas dance halls and honky-tonks. Grace continues, “To us, preserving the
tradition of Western Swing isn’t about keeping something alive like a relic. Western Swing
has always been about innovation.”
Innovation has led the sisters to channel the musical connection between danceability and
emotiveness, combining old sounds with new feelings and old feelings with new sounds.
It’s not nostalgia that drives the band as purveyors of Western Swing, but the aspiration to
take the music back to its roots and sustain the spirit of Swing.
Combine the musical stylings of The Mills Brothers, Ray Price, Count Basie, Willie Nelson,
and you have none other than The Quebe Sisters.
Big Cedar Fever

Big Cedar Fever is a string swing band out of central Texas that specializes in Western swing and jazz. Three part harmonies and tight musical arrangements draw listeners in, only to be taken away by the classic style and lyrics that recall another time and place.

Formed in January of 2018, the trio includes Georgia Parker on jazz-box guitar, Ian Lee on fiddle, and Nick Lochman on the upright bass. With all three sharing vocal duties and trading instrumental solos, this is a group whose constant harmony is right up there with their prowess as a dance band. The up-and-comers have played host to crowds of Lindy hoppers, Texas two-steppers, and Western swing dancers. In their short time together they have also been at home in listening room environments, providing intimate sets that showcase a true love for the history of the music.

Ms. Georgia Parker's deep catalog of classic songs, knowledge of the writers behind them and original material can entertain for hours. Her writing style is influenced by many greats such as Bob Wills, Willie Nelson and Peggy Lee but none have had a greater influence than that of fellow Texan, Cindy Walker.  Parker’s performances include several hits written by Walker such as, “Bubbles in My Beer,” “I Hear You Talkin’,” and “It’s All Your Fault.”  Parker is an accomplished bass player as well.  She’s played with many bands including Al Dressen’s Super Swing Revue, Banshee Tree, The Lonesome Heroes and Bottom Dollar String Band.

Ian Lee is a fiddle player of over twenty years hailing from Wimberley, TX.  At the age of 5, Lee made up his own mind to become a violinist. He became interested in Western swing and jazz over the last ten years and his greatest influence comes from Stuff Smith.  Although his fiddle playing is top notch, Lee’s vocal style is equally brilliant.  He’s got a smooth, silky yet strong voice perfectly suited to the style. His writing style harkens back to early jazz and the beginning of Western swing with echoes of Milton Brown and His Musical Brownies, whose members included the great Bob Wills.

Nick Lochman plays upright bass for the trio and hails from Boerne, TX, in the Texas Hill Country.  As a musician of twenty-plus years - first as a drummer, turned guitarist, turned upright bass player - rhythm has been a motif throughout Lochman’s career.  A typical Big Cedar Fever performance will include at least a few improvised bass solos, many times trading bars with fiddle player Ian Lee. Lochman developed a love for songwriting as well while leading a bluegrass band in the early 2000’s called The Crystal Creek Boys. His writing influences include Willie Nelson, Hank Williams and Tommy Duncan of Bob Wills’s Texas Playboys