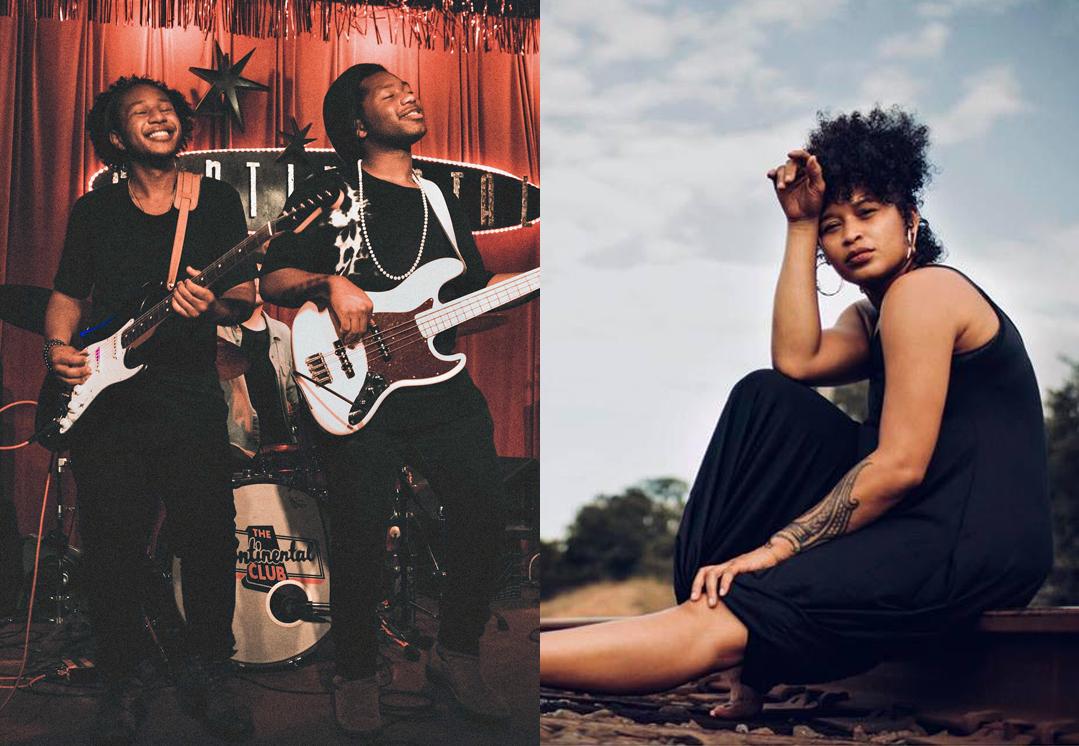 The Peterson Brothers and Latasha Lee

The Peterson Brothers combine infectious energy and modern grooves with jazz, funk, blues & soul to a create their own unique sound.

For a decade, the Texas natives have been building a fan base across America, playing both classic funk and soul, and their original music that includes jam-band style improvisation by Glenn Jr. on vocals and guitar, and Alex on bass, vocals and violin.

The brothers' love for classic Funk, Soul, and Blues music was born when their mother and grandmother brought home a crate of  assorted albums and turntable from a garage sale. The Peterson Brothers learned to play by listening to artists like The Isley Brothers, Earth, Wind & Fire, The Brothers Johnson, and B.B King; from then, they created their own stage show. Some of their first consistent gigs included regular performances at Antone’s, The Saxon Pub and other renowned venues in Austin.

“It’s important to point out the ages of these young cats, as they’ve become one of the most popular festival fixtures in the US, in just 10 years,” writes American Blues Scene. Minneapolis Star Tribune named them the band likely to earn the biggest fest buzz after performing at the Roots, Rock and Deep Blues Festival.

In 2018, they performed with the University of Texas Longhorn Pep Band for a special halftime show during the UT vs Baylor game. They’ve also held a packed weekly residency at Austin’s Continental Club for seven years.

In 2019, Gary Clark, Jr. told PBS News Hour that The Peterson Brothers are “some of the baddest cats in the world.” He included them in his finale super-jams at both weekends of Austin City Limits Festival, and they’ve opened for him across the country.

In November of 2019, they followed it with a single from their upcoming EP, and Buddy Magazine (Texas’ original music monthly) writes: ““Give Me Your Love” delivers the sound, feel, warmth, immediacy and fun of their stage show.”

The Peterson Brothers ushered in 2020 performing at The City of Austin’s official New Year’s Eve countdown. Their EP “The Intro” has been released with parties across Texas and beyond in early 2020.

They are featured on the cover Buddy Magazine’s January 2020 issue. In the feature story, Chuck Flores writes, “To witness the Peterson Brothers’ live show is to witness sheer joy. There’s the constant eye contact and electric smiles that pass between them, the undeniable ebullience. And then there’s the way they move together on stage, stepping and twisting, swaying together, then suddenly freezing (but only for a beat or so, but then again you never know — they never play anything the same way twice), then it’s right back into the groove.”

Latasha Lee
LaTasha Lee was born in Corpus Christi Tx. At the age of twenty, Lee caught the attention of Universal platinum producer Salih Williams. LaTasha who has always admired Aretha Franklin, Whitney Houston, Sam Cooke, Gladys Knight, Etta James and Otis Redding, knew her sound must contain the essence of these artists. In 2006 she signed to Salih Williams production company Carnival Beats and immediately started songwriting with him to create the Latasha Lee sound. In 2012 LaTasha made it to the top 50 spot on the television show X-Factor. In 2013 LaTasha along with producer Salih released her self-titled album along with 17 compelling music videos on YouTube. With extensive online and offline marketing, it allowed LaTasha Lee to quickly develop a fast-growing fanbase. LaTasha's band The BlackTies were quickly assembled shortly after releasing the album and the live shows began rolling in. October 4th of 2013 LaTasha Lee displayed their live performance for the Austin City Limits Music Festival in Austin Tx. LaTasha Lee has been featured on many radio and blog sites such as GrownFolkMusic.com, NiceKicks.com, Verbicide Magazine/UK, Next2shine.com, Afropunk.com, ThisisRnB.com, Redbullsoundselect.com, Echoes Magazine/UK, RollinSoulsBrasil, KUTX 98.9, The Bob Edward Show, Soulbounce.com and other various internet radio and blog sites across the world. LaTasha Lee has performed throughout the US drawing large crowds and leaving them wanting more.
Event by
The Heights Theater
Calendar
Website
Facebook
Twitter
YouTube
Instagram